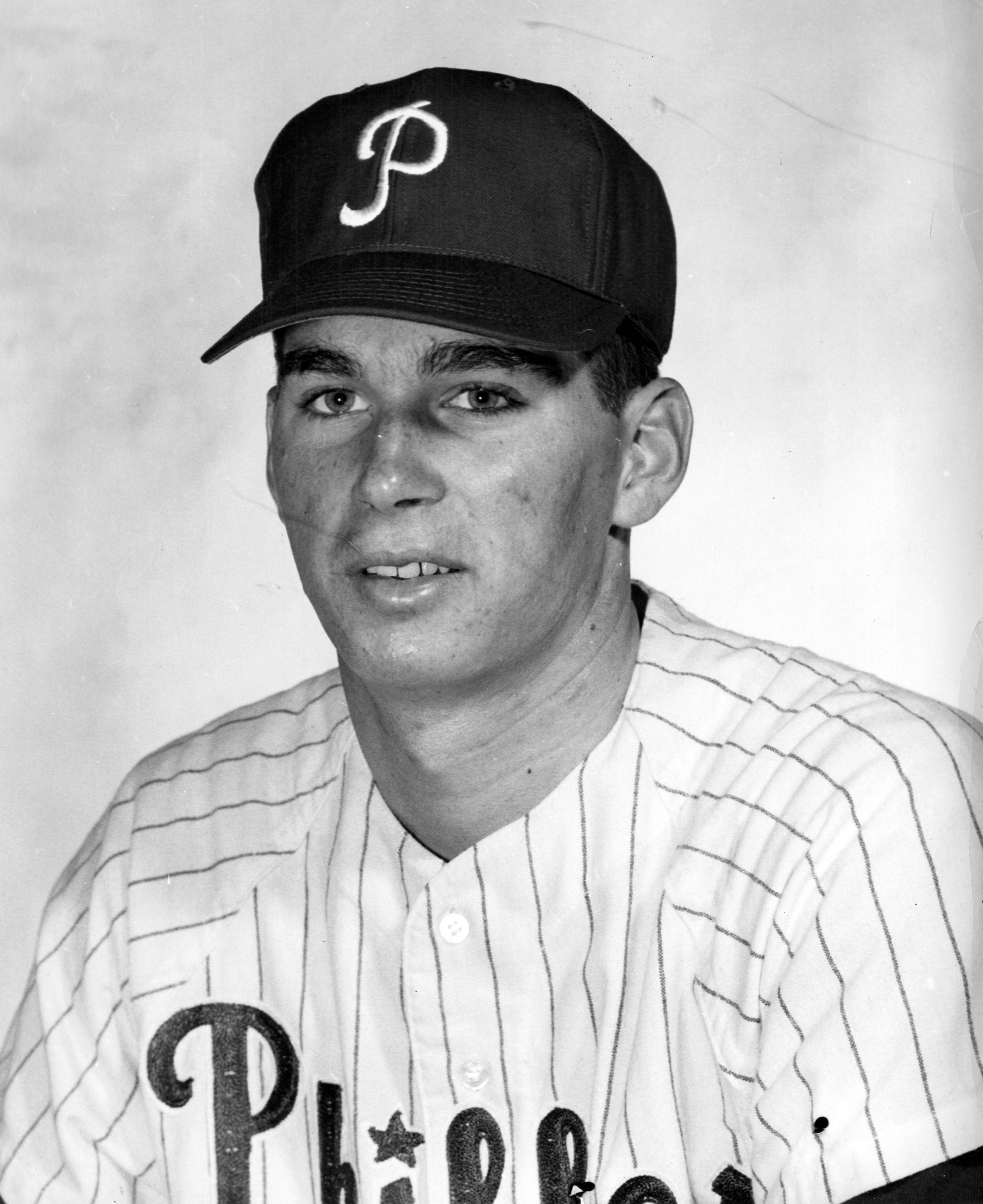 Of the two pitching Bennett brothers, briefly teammates on the 1964 Philadelphia Phillies, Dave was the tall one (6-feet-5), the young one (by six years), the right-handed one, the reserved one, and the most sought-after one, having received a $70,000 bonus upon signing in 1963. They briefly drew comparisons to Dizzy and Paul Dean, the zany Dennis being the Dizzy-like character. “One of these days we’ll [win] 20 apiece,” Dennis once said, sounding very much like Dizzy Dean.1 Although Dennis managed to win 43 career games despite numerous injuries, Dave Bennett’s career consisted of a single major-league inning.

David Hans Bennett was born on November 7, 1945, in Berkeley California. Parents George and Ruth raised five boys and a girl, and moved to Yreka in Siskiyou County, up north by the famed redwood forests. George worked for the phone company, and the scenic environs allowed plenty of opportunity for his fishing and hunting passions. He started the Little League program in Yreka, then founded the Babe Ruth League program, and coached all his boys as they passed through. “I’ve always told my boys to get in all the ballplaying they could get,” said George, “and they never seem to get enough. We have one rule around the house. Whenever and wherever there is a game to play in, the boys always go.”2

By the time Dave reached Yreka High School, his brother Dennis had signed with the Phillies and was off pitching professionally, likely affording Dave some hope of doing likewise. In 1961 Dave pitched for the Eureka Babe Ruth League All-Stars who won the District 8 championship. Dennis had badly injured his knee that spring while pitching for Chattanooga, so he returned to Yreka and helped to coach Dave’s team. At Yreka High, Dave starred for the Miners in baseball, basketball, and football. In baseball, he had a record of 23-2 over four seasons and once struck out 20 in a seven-inning game.3

Scouts packed Dave’s high-school games, as he heard from 17 major-league teams. In May 1963, while a high-school senior, the 17-year-old Bennett traveled to San Francisco’s Candlestick Park to work out for the Philadelphia Phillies. He graduated from high school on May 30, and signed with the Phillies’ Eddie Bockman on May 31, receiving the $70,000 bonus. Asked about his family’s influence, Dave said, “[Dennis] just told me to get a good deal. Really, other teams offered me more than the Phils.” But he did allow that “my dad sorta liked the idea of me playing on the same team with Dennis.”4 He turned down several college basketball offers, and used half of his bonus to buy his parents a house.

The 6-foot-5, 195-pound Bennett spent the rest of the summer with Bakersfield in the California League. There he joined fellow 17-year-old pitcher Rick Wise, along with several other future major leaguers, including John Briggs, Grant Jackson, and Gary Wagner. Bennett pitched well (9-6, 3.56 ERA) in his professional debut. In September he spent a few weeks with the Phillies but did not see any action.

The next spring Bennett was optioned to Chattanooga in the Southern League. After just nine starts (2-3, 4.21) he was recalled to the Phillies because of a short-term pitching shortage. The 18-year-old Bennett made his major league debut on June 12, 1964, at Philadelphia’s Connie Mack Stadium against the New York Mets. The Phillies’ starter that day was brother Dennis Bennett, who allowed five runs in 2? innings. By the time Dave Bennett took the hill to start the top of the ninth, wearing number 59, the Mets were leading 10-3. Joe Christopher tripled to start the inning, but Hawk Taylor fouled out to third and Bennett struck out Charlie Smith for the second out. Christopher scored on a wild pitch and Roy McMillan doubled to left, before Bennett induced Chris Cannizarro to fly out to right field to end the inning. One inning, two hits, and one earned run was his pitching line for the day, and, it would turn out, his major-league career. The Phillies emergency was soon over.

Of the inevitable comparisons with his brother, Dave allowed, “I throw harder. I think Dennis will admit that. And I feel I am getting stronger every year.” Dennis agreed with Dave: “Listen, if the kid had my curve and I had the kid’s fastball, we’d be unbeatable.”5

A few days after his debut Dave was optioned to Eugene, Oregon, of the Northwest League. He pitched quite well in his half-season in the Northwest, tallying a 10-2 record and a 2.71 ERA. He spent the end of the season with the Phillies but did not get into another game. After the season the Phillies traded Dennis Bennett to the Red Sox, but Dave was still very much a part of their plans. “He’s just as much right-handed,” said Philadelphia manager Gene Mauch, “as his brother is left-handed. Dennis was predictably unpredictable, but Dave is predictable all the way.”6 Or, as one writer put it: “One is as pleasantly kooky as Cassius Clay, and one as politely taciturn as Herbert Hoover.”7

Nonetheless, the promising fireballer was optioned to Arkansas of the Pacific Coast League for the start of the 1965 season. After just five starts, he was sent back to Chattanooga where he finished the season. For the two clubs, he managed only a 6-9 record and a 4.44 ERA. Not a great season, but he still had not turned 20 years old. He was still on track for a big-league career.

Bennett spent the 1966 season with Macon (Southern League) and Bakersfield, where he had begun his career three years earlier. He battled arm problems and pitched just 47 innings, finishing 1-4 with a 5.34 ERA. After the season the Phillies removed Bennett from their 40-man roster, assigning his contract outright to San Diego of the Pacific Coast League.

For the next several years Bennett became a serviceable minor-league pitcher. He spent the 1967 and 1968 seasons with Tidewater (Portsmouth, Virginia) in the Carolina League, and won 11 games in each season. The following year he moved to Reading in the Eastern League and finished 6-7. After the 1969 season Bennett was traded to the Pittsburgh Pirates. This was a hopeful development, as the Phillies organization seemed to have forgotten about him. He was still just 24 years old, and the major leagues had just expanded from 20 to 24 teams, creating many more jobs.

Bennett pitched for Waterbury in the Eastern League in 1970, and pitched very well. For the year he was 12-7 with a league-leading 2.22 ERA for the league champions. The Pirates were an outstanding team in this period, with a deep pitching staff, so Bennett had to return to Waterbury in 1971. After winning four of his first six decisions with a 2.94 ERA, he was promoted to Charleston of the International League. He did not pitch well for the Charlies (5-5, 5.30), in what would be his last shot at Triple-A.

Over the next three seasons Bennett continued to toil in the middle levels of the Pirates farm system. He pitched in the Eastern League (Sherbrooke) in 1972 (10-8, 2.67), but spent the next two seasons as a relief pitcher for three teams. After the 1974 season, Bennett’s professional career was over. He pitched 12 seasons, ending with a minor-league record of 92-68, and a single major league inning. When he threw his final pitch, he was 28 years old.

Bennett had returned home to Yreka every fall throughout his career, and would continue to make his home there. He married Grace, with whom he had attended Yreka High School, and the couple raised three sons, who also attended Yreka High. One of their sons, Erik, spent 13 years pitching professionally, including stints in the major leagues with the Twins and Angels.

The Bennett family was well rooted in Yreka. Dave and his father, George, ran an informal fishing and hunting guide service for a few years. They did not specialize in any one kind of animal, but rather would guide you depending on what was available to fish or hunt at the time. As of 2012, Dave Bennett had worked for many years in construction in the town. Grace Bennett was a county supervisor, and both Dave and Grace had spent many years volunteering in the community, especially in youth sports.

Dave Bennett spent just a single inning in the big leagues, but that is more than most of us spend. He had a long career pitching professionally, and was one of the few major leaguers who had both a brother and a son who had their own big-league careers.

This biography is included in the book "The Year of the Blue Snow: The 1964 Philadelphia Phillies" (SABR, 2013), edited by Mel Marmer and Bill Nowlin. For more information or to purchase the book in e-book or paperback form, click here.