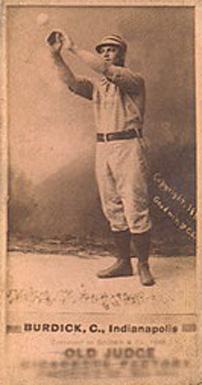 Before the time of extensive scouting, there are numerous stories of teams offering a tryout to a local phenom and, if he made good in his audition, signing him to a contract. Some of these “finds” went on to stellar major league careers. However, roster limits necessitated that when a new youngster was added to the club, a current player often had to be released.

In the spring of 1889, John T. Brush, owner of the Indianapolis club of the National League, wanted to take a look at a 17-year old fireballer named Amos Rusie, who was tearing up the local sandlots. When the “Hoosier Thunderbolt” made good and began what would turn into a Hall of Fame career, somebody had to go, and the odd man out was Bill Burdick. While speaking at banquets later in life, Burdick would take credit for “discovering” Rusie.1

William Byron Burdick, called “Bill” most of his life, was born October 11, 1859, in Austin, Minnesota, to Ira Dwight and Sarah Francis (nee Coon) Burdick. Both were natives of New York. Of here five children, Bill was the only boy. Their father was a captain in the 31st Wisconsin Infantry during the Civil War and was employed as a retail druggist in 1870 and commercial traveler by 1880.

By the time of the 1870 US Census, the Burdick family had moved to Milton, Wisconsin, and by 1880 had relocated to Janesville. where Bill, now 21, was employed as a machinist. The first report of him playing ball is from 1881, when he was in the lineup as a catcher for a local team called the Mutuals.2 His debut as a pitcher later that summer did not go well. According to the report, “…the regular pitcher was unable to go, and Burdick was put in to pitch…which was a disastrous mistake, as the record of 13 passed balls and wild pitches in two innings will show.”3

In 1882 Ira Burdick purchased a ranch and moved the family to the Dakota Territory, where Bill caught for a local team in Aberdeen for the next two years. He married Mary Ellen Kemmett on January 10, 1883, at Rock Lake, Wisconsin. They had one child, a son named William James, born February 17, 1886. No baseball mention of Bill was found in 1885, but in the spring of 1886, he signed with the Eau Claire Lumbermen of the Northwestern League, his first season in professional baseball. No statistics for that season are available, but he must have had some success after converting to a pitcher, one report stating, “A purse of $25 was raised at the ball grounds yesterday for Burdick, pitcher of the Eau Claires, as a compliment to his first-class work on the diamond.”4

Burdick moved on to Oshkosh of the same league in 1887, where he played for manager Frank Selee. One report said that he wanted $300 a month to sign with Oshkosh but later it was admitted, “The salary which the new pitcher will receive is not made public, but it is inferred he will be well paid.”5 Burdick proved worth whatever figure he eventually agreed to, posting a 21-9 won-loss record in 30 starts. After the season Selee was hired to manage Omaha in the Class A Western League and he took most of the former Oshkosh team, including Burdick, with him.

By the middle of the 1888 season Burdick’s record stood at two wins and eleven losses, but a closer look at his record shows he pitched in hard luck. He allowed just 102 hits and 18 walks in 111 innings and more than half of the 77 runs he allowed were unearned. Another factor in his record may have been revealed in this comment: “Burdick is a fairly good pitcher as long as no one is on base. When there is, he literally goes to pieces.”6 In any event, his effective drop ball caught the attention of higher leagues, and in July 1888 he was sold to the Indianapolis Hoosiers of the National League for $1,500.7 After a delay in arriving in Indianapolis due to the illness of his wife, Burdick first saw action in an exhibition game against Logansport, Indiana, in which he shut out the minor leaguers, 7-0, on one hit.8

Burdick made his major league debut on July 23 at Seventh Street Park in Indianapolis and defeated the Chicago White Stockings, 2-1. The game story noted that he had, “…pretty good speed, good control, and a deceptive drop ball,” and added, “Young Burdick…made a favorable impression. He seems to have that most necessary of all qualifications for a pitcher, nerve, or ‘heart’ as they call it.”9 He took a regular turn in the rotation the rest of the season and had some success, but was also the victim of hard luck, dropping a 2-1 decision to the Quakers’ Charlie Buffinton in Philadelphia and losing, 3-0, to the Nationals in Washington.

His problem pitching with men on base continued to haunt him. In an August game against the New York Giants, he allowed ten stolen bases, leading to a 6-4 Hoosier loss.10 Nonetheless, Burdick finished the season with a 10-10 record (the staff’s only .500 record) and a fine 2.81 ERA for the 50-85 seventh-place team. Three pitchers lost more than 20 games. The team’s leader in wins, Henry Boyle, was 15-22. Also losing more than 20 games were Egyptian Healy (24) and

That off-season Brush formulated a plan under which players were placed into one of five groupings based on both on- and off-field performance. Each class had a corresponding salary cap: Class A players could earn $2,500 annually, and the salaries decreased $250 in each lower class. Class E players could earn $1,500. The plan, which was approved by Brush’s fellow owners, caused a backlash among the players, leading directly to the formation of John Montgomery Ward’s Players League the next year.11 It’s not known which classification Burdick fell under, but he signed his Indianapolis contract in early March 1889.12

Late in 1888 Brush announced that he intended to carry 13 men on the Hoosiers roster in 1889, including only three pitchers, but said that Burdick and Boyle were two of the hurlers he intended to keep.13 However, he continued to try to strengthen the pitching staff by adding Pretzels Getzien after his former team, the Detroit Wolverines, disbanded, Jim Whitney, formerly of the Washington Nationals, and the aforementioned Rusie. Right after the season began in late April, Hoosier manager Frank Bancroft announced that he had decided to keep Boyle, Whitney, Getzien, and Rusie as his pitchers, with Lev Shreve and Burdick “held for sale or exchange”14

Despite his now tenuous position on the pitching staff, Burdick made the opening day roster, but pitched sparingly over the first two months of the season, mostly in mop-up relief roles. He appeared in ten games with only four starts and had a record of 2-4. By June, it was reported, “Burdick’s work has convinced the management that League pitching is too fast a pace for him, and if a market can be found he will be released. Hereafter Rusie will be called more frequently into service.”15

This concluded Burdick’s major league career, which consisted of the last half of the 1888 season and the first half of 1889 with Indianapolis. He appeared in 30 games, with 22 complete games among his 24 starts, and compiled a 12-14 record with a 3.17 earned run average. In 221 2/3 big league innings, Burdick struck out 71 and walked 56. No height or weight during his playing days is known for the right-hander, but after his debut in Indianapolis he was described as “…short and stout,” but has “…great strength, and will not want for speed and endurance.”16

After his release he went to his parents’ home in South Dakota for a bit and reportedly fielded an offer from Minneapolis of the Western Association for $700 for the balance of the season,17 but instead he signed with Sioux City.18 He went 14-5,completing 18 of 19 starts, with a 2.39 ERA for the Cornhuskers. In nineteenth century baseball, substitute players were often called on to umpire in the absence of the regular arbiter. Burdick was asked to fill in for a Sioux City-Milwaukee game on September 24. Milwaukee captain George Shoch not only accused Burdick of being drunk on the field but making rank decisions favoring Sioux City. After Shoch called his team off the field, Burdick awarded his teammates a 9-0 forfeit win.19 Burdick defended his actions, denied he was drunk, and accused the Milwaukee players of drinking during the game, “…and inducing them to use profanity towards him from the press box that was not only disgusting, but sickening.”20

He spent the off-season managing a gymnasium in Minneapolis21 and one report indicated that he had signed a reserve contract with Minneapolis for the 1890 season.22 Instead, he returned to Sioux City but was released by the end of June. No individual or team records are available in Baseball-Reference, but season-ending statistics printed in one of the league newspapers indicated he appeared in 25 games for Sioux City, all as a pitcher. No won-loss record was included, but he had a 3.76 ERA.23 Burdick moved to Minneapolis where he tried umpiring again. He spent the winter in Minneapolis, one report saying he was employed by a street railway company, and another that he would tend bar in a saloon owned by a former Sioux City teammate.24

Burdick began the 1891 season with an amateur team called the Eclipse, but in mid-May was signed by the Minneapolis Millers. He appeared in just three games, winning his only decision; citing lack of speed, the Millers released him in early June. He remained in Minneapolis for a while, rejoining his old Eclipse team, and umpired on occasion, but his whereabouts over the next several years are unknown. A report from September 1892 stated, “John Smith, ‘Bill’ Burdick and other Sioux City boys who are now engaged in business in Chicago are enjoying a good trade and health.”25 No one by the name of John Smith was a teammate while Burdick played in Sioux City and no information could be found to verify that Burdick had in fact moved to Chicago.

All that is known is that nearly 20 years later, by the time of the 1910 US Census, he had moved to Sherman, Idaho, where he was employed as a master mechanic for the Great Northern Railroad. Burdick remained in the Pacific Northwest the rest of his life. He and his wife had moved to Seattle by 1920 and by 1930 had relocated to Spokane with Bill still employed by the railroad as a mechanic and electrician. During this time, he and his wife also operated Burdick’s Resort at Newman Lake, a popular recreation area about halfway between Spokane and Coeur d’Alene, Idaho.

After 57 years of marriage, Bill’s wife Mary died on August 6, 1930. Bill moved in with his son, daughter-in-law, and grandson in Spokane, where he lived the rest of his life. He died on October 23, 1949, at the age of 90 of a cerebral hemorrhage (stroke) with arterial hypertension. He was buried next to his wife at St. Thomas Cemetery in Coeur d’Alene.26

This biography was reviewed by Bill Lamb and Norman Macht and fact-checked by Kevin Larkin.

Unless otherwise noted, statistics from Burdick’s playing career are taken from Baseball-Reference.com and genealogical and family history was obtained from Ancestry.com. The author also used information from clippings in Burdick’s file at the National Baseball Hall of Fame. All other sources are shown in the Notes.