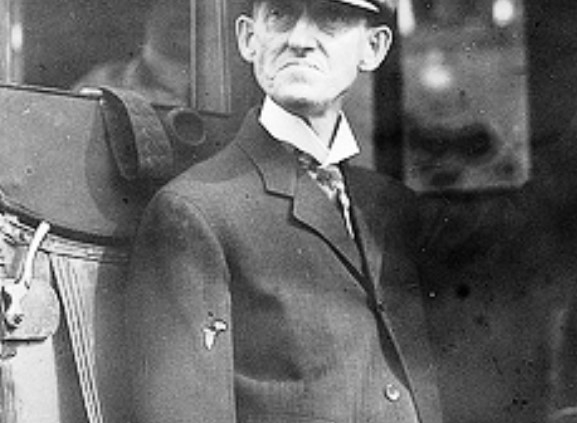 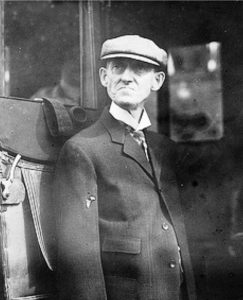 A sufferer from locomotor ataxia, a painful disease of the nervous system that caused him to walk with two canes, John T. Brush was a successful retail magnate who owned the New York Giants from 1903 until his death in 1912. Though the Giants became the most valuable franchise in professional sports during his tenure, and he was generally regarded as the most influential magnate in the National League’s executive sessions, Brush was not well-liked by players or the press. “Chicanery is the ozone which keeps his old frame from snapping,” wrote one critic, “and dark-lantern methods the food which vitalizes his bodily tissues.”

John Tomlinson Brush (some suggested the T stood for “Tooth”) was born in Clintonville, New York, on June 15, 1845. Orphaned at age four, John lived with his grandfather until going to Boston at age 17 to seek his fortune in the clothing business. After serving with the First New York Artillery during the Civil War, he opened a department store in Indianapolis when he was only 30 years old. Brush’s first contact with baseball came in 1887 when he bought into the upstart Indianapolis Hoosiers of the National League as a means of advertising his store. In 1889 he formulated the “Brush Classification Plan,” under which players were placed into one of five groupings based on both on- and off-field performance. Each class had a corresponding salary cap—Class A players could earn $2,500 annually, and the salaries decreased $250 in each lower class so that Class E players could earn $1,500. The plan, which was approved by Brush’s fellow owners, caused a backlash among the players, leading directly to the formation of John Montgomery Ward‘s Players League.

The NL dropped Indianapolis in 1890 so Brush bought stock in the New York Giants and became owner of the Cincinnati Reds the following year. In Cincinnati he came under fire from Ban Johnson, then a local sportswriter. When the newly formed Western League was searching for a president in 1894, Brush interceded to make sure Johnson got the job, thus ending criticism from the young reporter’s pen. The two continued to lock horns, however. Brush still owned stock in the Indianapolis franchise of the American Association, and Johnson criticized his shady dealings involving the rosters of the AA Hoosiers and the NL Reds. The upshot was that the Cincinnati owner was forced to divest himself of his stock in the Indy club. Prior to the 1898 season Brush floated another “Brush Rule” past his fellow owners, this one stating that any player who addressed an umpire or fellow player in a “villainously filthy” manner would be brought before a three-man disciplinary board and banished for life if found guilty. The players received the rule about as well as Brush’s 1889 edict limiting their salaries, and it had about the same lasting impact.

In 1901 Brush attended a meeting with fellow NL owners Andrew Freedman of New York, Frank Robison of St. Louis, and Arthur Soden of Boston at Freedman’s estate in Red Bank, New Jersey. Earlier this quartette had decried syndicate baseball, but now they were formulating a plan for an even larger syndicate, the National League Base Ball Trust, which would hire all managers and assign players to teams that would no longer be individually owned. The four robber barons proposed that the former owners would hold shares in the trust, with Freedman receiving a 30% share, his three compatriots receiving 12% each, and the others not present receiving less (the Brooklyn ownership would receive only 6%). The syndicate plan died on the vine because, not surprisingly, it didn’t gain the fifth vote necessary for approval.

On August 12, 1902, Giants owner Freedman announced, “I will turn the inside affairs of the business over to Mr. Brush, as I have little or no time to give to baseball, while Mr. Brush will be able to devote practically all his time to the game.” In retrospect it seems clear that Brush had favored New York all along. In 1900 the Giants purchased Christy Mathewson from Norfolk of the Virginia League. When the rookie did nothing to distinguish himself in three games, Freedman sent him back to Norfolk where he went 21-2. After the season Brush drafted him for the Reds, then “traded” him to the Giants for sore-armed Amos Rusie, who hadn’t pitched since 1898. Mathewson, of course, went on to win 372 games for New York, while Rusie didn’t win a single game for Cincinnati.

Brush purchased the Giants outright from Freedman in 1903. At the time the department-store mogul still owned the Reds and also owned the American League’s Baltimore Orioles, and the rash of personnel transactions that preceded the sale of his Cincinnati and Baltimore shares positioned New York to be a juggernaut for the first third of the twentieth century. The most important of those moves was the signing of John McGraw away from his own Orioles to manage the Giants, but he also released from their Baltimore contracts future Hall-of-Famers Roger Bresnahan and Joe McGinnity, both of whom signed with New York. When the loaded Giants ran away with the NL pennant the following year, Brush (with prodding from McGraw) became responsible for the cancellation of the 1904 World’s Series. “There is nothing in the constitution or playing rules of the National League which requires its victorious club to submit its championship honors to a contest with a victorious club in a minor league,” he announced.

Brush lived to see his Giants play in three World’s Series (1905, 1911, and 1912). Shortly after the last of those fall classics, he was thrown from an automobile in Harlem and sustained a serious hip injury. On November 26, 1912, while en route to a sanatorium in Southern California for recuperation, Brush died aboard a train as it was passing through Missouri. He was survived by his second wife, stage actress Elsie Lombard, who was 25 years his junior. Brush’s obituary in The New York Times described him as “one of the wisest and ablest counselors in the National League.”