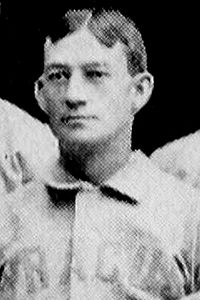 Bill Eagan was the type of player that today would be called a “red ass.” The November 14, 1900, issue of The Sporting News detailed the many ways in which he was also a great wag and crowd pleaser and a huge gate attraction in almost every one of his many minor and major league stops. Crowds everywhere would laugh upon seeing him play for the first time, for Eagan was so superstitious that he never would go directly from the bench to his position at second base. Instead, he would either tiptoe all the way up the third base line from home plate and around third base, or up the first base line and around first base, depending on which side of the diamond his team’s bench was situated. Yet, curiously, for all of his idiosyncratic behavior and the constant attention he drew to himself, none of his vital statistics are known and photographs of him are scarce.

He got the nickname “Bad Bill” the hard way: He earned it through regular, rowdy behavior. A prime example earned him a suspension by St. Louis in late August 1891, his first major league season. After a night of playing poker and drinking beer, Eagan lied to team owner Chris Von der Ahe the next day, claiming that an injured finger would prevent him from playing that afternoon. The Sporting News recounted that earlier in the season, on a trip to Cincinnati, Eagan had gleefully thrown empty beer bottles out the window of his room in the Grand Hotel and nearly skulled several passing nuns from the Sisters of Mercy.

In truth, at the time of his first major confrontation with Von der Ahe that August, he did have a felon on the thumb of his throwing hand, and the owner readily used it as an excuse to send him home for six weeks without pay. The final straw for Von der Ahe was when Eagan became hopelessly inebriated while the Browns were en route to an exhibition game at Sioux City in October, and had to be thrown off the train some 50 miles from Chicago in the middle of nowhere.

Yet, even though almost every minor league team had its patience similarly tested by him, he was seldom without a job for long, and it was not because he “played for the crowd.” After observing Eagan all too briefly with Pittsburgh in 1898, Pirates outfielder Patsy Donovan came to admire the way he rehearsed getting hit by pitches, even in batting practice. Fearless, Eagan crowded the plate and could not be intimidated, not even by a hard thrower like Amos Rusie. Donovan noted that the second sacker was hit many more times than he was given his base, sometimes as many as three or four in a single at-bat, because umpires refused to buy that he was not letting himself be hit. In 61 at bats with Pittsburgh in 1898, before he was released, Eagan collected six HBPs, usually earning his desired call only after he wore an umpire down by getting hit repeatedly. In its March 10, 1900, issue, The Sporting News affirmed that he was a perennial bane of umpires, but not only for being hit by pitches. Making him even more of a thorn in their posteriors was the fact that he knew all the fine points of the rulebook, even though he was a near illiterate and spoke “dese,” “dose” and “youse” English.

Many tales of Eagan either were exaggerated or patently untrue, as is one in career minor leaguer Edward Ashenbeck’s Humor in the Minors. It has the bumpkin Eagan, unable to read the daily bill of fare, diving under a restaurant table, thinking that his manager Gus Schmelz had just given him the sign to slide when Schmelz, seated across from him, stroked his trademark red whiskers. Though both men had lengthy careers, Eagan never played under Schmelz. Yet there are enough true stories about Eagan’s escapades to fill a book.

Born in Camden, New Jersey, on June 1, 1869, he left home shortly before his 18th birthday to take his first pro at-bats with Scranton, a member of two different leagues in 1887. Finding the competition there too keen, he dropped down to the Jackson, Michigan, Jaxons of the Tri-State League in 1888. He had climbed up several rungs on the minor league ladder by 1890, when he performed for his second season in a row with the Harrisburg Ponies, first in the Eastern Interstate League and then in the Atlantic Association, and hit .313. His major league debut, on Opening Day of 1891, also kicked off his mercurial year with the American Association St. Louis Browns; he went 1-for-4 against Cincinnati in a 7-7 tie that was later erased from the books. Eagan was tossed from the team soon after the regular season ended, and he spent the next six seasons in the Class A Eastern League, save for a six-game stint with Chicago in 1893. Impressive in his Colts debut on September 18 at Chicago, he went 3-for-4 and “made two phenomenal plays” according to The Sporting News in a 7-2 win over Washington’s Otis Stocksdale. In all, Eagan not only appeared to be a much better hitter than he had been with the 1891 Browns (where he batted just .219 in 82 games) but he had also had ceased drinking — at least for the moment. But after he went 2-for-15 in his next five appearances, the Colts dismissed him.

Eagan then joined Syracuse’s Eastern League entrant. He survived a suspension in 1896 by owner George Kuntzsch for forming a divisive clique on the team and returned to the Stars for his fourth consecutive season in 1897. That fall, Eagan was claimed by Pittsburgh, which was given its pick of Syracuse’s players for having “loaned” the Stars third baseman Jud Smith and outfielder Abe Lizotte earlier that season. The Sporting News, which closely followed the transaction, said it later emerged that Kuntzch had duped the Pirates out of a claim on future Hall of Fame pitcher Vic Willis so he could sell Willis to Boston. The ruse involved sending a report on Eagan, which painted his personal habits as so dreadful that Pittsburgh owner William Kerr suspected the report was phony. Upon learning his club may have been tricked, Kerr tried to farm Eagan to Indianapolis, where he would make less money than he had with Syracuse. Kerr was thwarted when he could not get his new second baseman through waivers.

In May 1898, Eagan had a golden opportunity to win a regular post with the Pirates when second baseman Dick Padden discovered he had been fined $25 for being thrown out of a game two weeks earlier and became “wild with rage.” After a heated exchange with manager Bill Watkins, Padden refused his teammates’ offer to pay the fine and left for his home in Ohio. Eagan had been on the wagon, but likewise got on Watkins’ bad side. He set himself on a near suicidal course when he arrived at the Philadelphia park on June 3, 1898, “unfit to play through over-indulgence,” after a night on the town with friends in nearby Camden, where he lived. Upon learning that he was being shipped back to Syracuse, The Sporting News lectured: “The action of Eagan in straying away from the paths of discipline was an unfortunate one.” No sooner was Eagan in Syracuse when, asked to take pay cut, he hurled himself completely off the wagon by going to work in a Camden saloon. In October 1898, while drunk in a Camden barbershop, he brandished a revolver and said he was going home to kill his wife and then himself. When Eagan left the shop, witnesses frantically summoned the police, who arrived at Eagan’s home just as his wife flew out of their house. Eagan, chasing her, was trying to aim the revolver after already having fired off several shots. Overpowered and taken first to jail and then to an asylum, Eagan remained under psychiatric care into the winter.

In July 1899, having only recently joined Detroit of the Western League, he made a spectacle of himself after being ejected from a game in Kansas City’s Exposition Park. He was carted into the clubhouse drunk and proceeded to lie down in the shower fully clothed and let the water soak him. The Detroit Tribune clucked its tongue at the stupidity of the Wolverines’ management: “William Eagan, or, as he is known in the base ball profession, ‘Bad Bill Eagan,’ is a player of national reputation. He is an ignorant man, and stories of his badness are told all over the league.” The following month he was released for “disorderly behavior” by manager George Stallings and said to be suffering from “insanity.”

The Tribune continued to chronicle Eagan’s rapid descent. In 1900, while he was playing for Youngstown in the Interstate League, it recounted: “He has lost his mind: in his mania he calls for his mother, whom he apparently idolizes.” A few months later a Youngstown paper reported that he had died penniless recently in Syracuse — prematurely it turned out. Eagan did not die penniless until February 13, 1905, when “quick consumption” claimed him in Denver after he had gone there for his health. The Denver Free Press mourned: “He was his own worst enemy…his habits alone preventing him from taking a much higher rank in the game than he ever attained.” His February 15, 1905, Pittsburgh Press obituary stated that he not only died penniless but efforts to “locate his relatives, who live somewhere near Philadelphia” were thus far unavailing. We are left to presume that after the violent altercation with his wife in 1898, his connections to her, as well as with any offspring they might have had, were forever severed.

Eagan’s story, though it has many features in common with those of the numerous players in his day who were crippled by alcohol, is an especially tragic one. While nothing is known of Eagan’s early life, at the point we pick him up at age 17 in 1887 he was the youngest player on the Scranton team, which began the season in the independent Pennsylvania State Association and moved to the faster International League on June 9. In all likelihood it was his first venture away from his home and family. Scranton in the 1880s was a rugged, hard-drinking mining town where, as was the case in many of the Pennsylvania mining communities, feelings about ball teams ran high; visiting players were known to carry loaded revolvers under their uniform blouses for protection. Eagan then spent his second pro season in Jackson, the site of Michigan’s first state prison (built in 1839), and another roughneck town, likely as rife as Scranton with saloons and houses of prostitution. Unable to read or write, almost certainly from a home that did not yet have a telephone, Eagan was cut off for long months from all communication with his family in Camden and especially his mother, who appears to have been the most influential figure in his life. Is it any wonder that by the time he arrived in St. Louis at age 20 he already had a horrific drinking problem? Indeed it is something of a marvel that his alcohol-induced transgressions never landed him in prison or impaired him from being of any use at all on the ball field until he was in his 30s.

This biography is an expanded version of one that appeared in David Nemec’s Major League Baseball Profiles: 1871-1900, Volume 1 (Bison Books, 2011), with Nemec as the principal writer assisted by David Ball.

In assembling this biography I made extensive use of Sporting Life and The Sporting News for details not only of Eagan’s professional baseball career but also of his life after he left baseball. In addition, I consulted Edward Ashenbeck’s Humor in the Minors and select editions of the Detroit Tribune, the Pittsburgh Press and the Denver Free Press. Eagan’s major and minor league statistics came from www.baseball-reference.com.