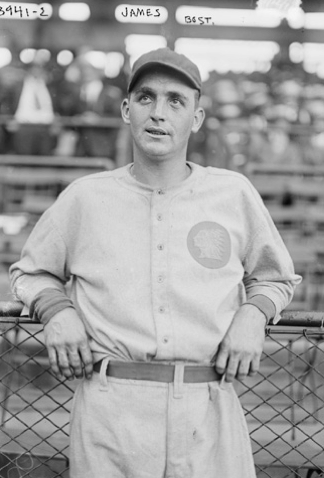 At the end of the 1914 season, 22-year-old Bill James stood on the cusp of baseball stardom. He had just pitched his Boston Braves to the most improbable pennant in baseball history, and followed up on that performance by beating the mighty Philadelphia Athletics twice in three days during that year’s World’s Series. He was such a uniquely gifted pitcher that John J. Ward of Baseball Magazine predicted, “The further acquisition of experience should [make him] one of the greatest all-round pitchers in history.” When he wrote those words, Ward probably never could have imagined that this talented pitcher, who already had 32 major league wins behind him, had but five more in front of him.

William Lawrence James was born March 12, 1892, in Iowa Hill, California, the third of four children of William and Emma James. Located 30 miles northeast of Sacramento, Iowa Hill was gold- mining country, and that is how James’ father supported the family. When Bill was 11 years old, the family moved 50 miles north to Oroville, where the senior James took on work as the manager of a dredge mining company. Bill’s parents wanted a similar future for their son and encouraged him to study mining engineering at the University of California, but Bill had other ideas. During his three years at Oroville Union High School, he matured into a 6’3″, 195 lb. pitching prodigy blessed with an exceptional fastball. After high school Bill briefly acquiesced to his parents’ wishes and attended classes at St. Mary’s College in Oakland. But when Seattle of the Northwestern League offered him a contract prior to the 1912 season, he left school for good.

In Seattle James added a spitball and change of pace to his arsenal. The impressive results that followed hastened his development into the most touted prospect in all of baseball. James pitched Seattle to the pennant in 1912, at one point reeling off 16 consecutive victories. At season’s end, his 29-7 record and 2.17 ERA landed him a contract with the National League’s Boston Braves. It also left him with the nickname “Seattle Bill,” a moniker designed mostly to avoid confusion, as the 1912 Cleveland Naps already featured a “Big Bill” James and a William “Lefty” James.

“Seattle Bill” joined a Boston club that had long since cemented its place as the most wretched franchise in all of baseball. Going into 1913, the Braves had not enjoyed a single winning season since 1902 and had not finished within 50 games of first place since 1908. With the arrival of new manager George Stallings, the Braves showed modest improvement during James’s rookie season, as the club climbed to fifth in the standings and moved to within 31 games of first place. James performed well in his first season, posting a 2.79 ERA while splitting time between the starting rotation and bullpen.

The Braves’ stunning reversal of fortune in 1914 has long since entered baseball annals as the most unlikely championship run in history, but the critical role James played in the Boston uprising has undeservedly faded into obscurity. From July 9 until the end of the season, he went 19-1 with a 1.51 ERA. His only loss came on August 22 in Pittsburgh, when he was beaten 3-2 in 12 innings. Without that setback, James would have ended his season with a record-breaking 20-game winning streak. With it, he still assembled the best season of any pitcher in the National League. James led the NL in winning percentage (.788), and he finished in the top five in wins (26), ERA (1.90), innings pitched (332.1), and strikeouts (156).

In Game Two of that year’s World’s Series, James matched up against Philadelphia’s Eddie Plank in a classic pitchers’ duel at Shibe Park. Plank pitched brilliantly that afternoon, surrendering seven hits and holding the Braves scoreless until Boston pushed one run across in the ninth inning. But James was better, allowing just two hits, fanning eight, and coaxing a game-ending double play with the tying and winning runs on base to preserve the 1-0 victory. Two days later, James was called into action again when Game Three stretched into extra frames. Pitching on one day’s rest, James held the Athletics hitless in the 11th and 12th innings before Boston scored the winning run in the bottom of the 12th on a Joe Bush throwing error. In a span of three days, James had won two games, pitched 11 innings, and allowed just two hits. The Braves completed their sweep of the Athletics the following afternoon.

Despite his success and status as a World’s Series hero, James expressed ambivalence about life in the major leagues. “I like the game well enough,” he told Baseball Magazine after the Series. “But I can’t get used to the long jumps from one city to another. It looks nice from the outside to think of traveling around the country, but one sweep of the circuit is enough. After that it becomes hard and disagreeable work.” Ironically, he got his chance to see major league baseball from the outside soon enough.

James reported late to camp the following spring after a brief holdout induced the Braves to double his salary, but it soon became apparent that he was a mere shadow of the pitcher who had dominated the league the previous year. From the start of the season James complained of chronic arm fatigue. Initially the press took a dim view of the injury, dismissing his protests as the petulant whining of an overpaid athlete. But by June, reduced velocity and flagging endurance forced James out of the starting rotation. After a poor relief appearance on July 30, he was shelved for the rest of the season.

The Braves hoped that a long winter’s rest would restore strength to James’ right arm, but it was not to be. In late March 1916, teammate Johnny Evers signaled the end was near when he admitted to reporters: “His arm is gone. Bill knows it and we know it.” Shortly thereafter, the 24-year-old pitcher was placed on the voluntary retired list. The press described the injury as a “dead arm,” but in all likelihood James suffered from a torn rotator cuff, a condition the medicine of the day was powerless to correct.

Nonetheless, the man who had once bemoaned the transient life of a professional baseball player attempted several comebacks. After undergoing numerous shoulder operations, James tried to return to the Braves in 1918 but the comeback was aborted before the start of the regular season. After serving in the 63rd Infantry during World War I, James pitched one game in relief for the Braves in 1919. He spent the next several years bouncing around the Pacific Coast League as a player and coach before concluding his career with Sacramento in 1925.

In retirement Bill James lived in Oroville with his wife, Harriet Newman, whom he had married in 1924. The couple had one daughter, Janet, born in 1926. James worked as a truck driver for an oil company for several years and later as an assessor for Butte County. He died of a stroke on March 10, 1971, two days shy of his 79th birthday, and is buried in Memorial Park Cemetery in Oroville.