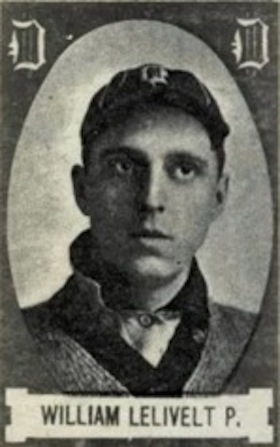 On August 2, 1912, Harry Niles of the Toledo Mud Hens led off the first inning by drawing a walk from pitcher Bill Lelivelt of the Minneapolis Millers, but Niles was quickly erased by a double play. That walk was the only blemish on Lelivelt’s performance, as he pitched a no-hitter and faced 27 batters in a near-perfect game. Only three balls were hit to the outfielders, and one of those was caught in foul ground. Lelivelt’s achievement was considered “the greatest pitching feat in the history of the American Association.”1

William John “Bill” Lelivelt was born on October 21, 1884, in the Netherlands. His Dutch name was probably Willem Jan Lelivelt. His parents, Franciscus Zecharius “Frank” Lelivelt and Theodora “Dora” (Mattijssen) Lelivelt, were married in Amsterdam in June 1884.2 Bill’s brother, Jack, was born in 1885. The family came to America in 1887 and settled in Chicago. Frank was a carpenter. According to the 1900 US Census, 15-year-old “Willie” worked as a stationery salesman. Bill and Jack Lelivelt played on amateur baseball teams in Chicago, including the Wholesale Dry Goods team of the National Union League.3 The family resided two miles from West Side Park, home of the Chicago Cubs.

Bill began his professional baseball career in 1905 as a 20-year-old right-handed pitcher for the Davenport (Iowa) Riversides of the Class B Illinois-Indiana-Iowa (Three-I) League. He shut out Bloomington in May and pitched two shutouts against Peoria in June.4 He finished the year with a 17-14 record and returned to the Davenport team in 1906. Lelivelt was particularly impressive in August 1906, hurling a pair of three-hit shutouts against Bloomington and an 11-inning shutout against Rock Island.5 The next year he compiled a 9-7 record for the Clinton (Iowa) Infants of the Three-I League.6 To resolve a dispute between the Infants and the Decatur (Illinois) Commodores, league President Edward Holland transferred Lelivelt to the Commodores in August 1907.7 Lelivelt pitched three games for Decatur, including a shutout against Clinton,8 before his 1907 season ended due to a “lame arm.”9 He returned to the Commodores in 1908.

At 6-feet and 195 pounds, Lelivelt was an imposing figure. On July 1, 1908, he pitched brilliantly for 15 innings in Cedar Rapids, but lost the game and his temper in the 16th when Cedar Rapids scored the winning run on a close play at home plate. Enraged by Umpire Setley’s safe call, Lelivelt “struck at” Setley, and as Setley ran to get a bat to “arm himself,” Lelivelt threw the ball at his back. Police intervened and Lelivelt was “put off the grounds.”10 Three weeks later the feisty hurler fired a two-hit shutout against Cedar Rapids.11 In late August he struck out a total of 22 batters in two victories over Clinton,12 and in the season finale, he pitched a three-hit shutout against Bloomington.13 Lelivelt finished the season with a 16-8 record, and the Mobile (Alabama) Sea Gulls purchased his contract for $600.14 After four years in a Class B league, the 24-year-old Lelivelt advanced to the Class A Southern Association.

Lelivelt was a dominating pitcher for Mobile in 1909. In his first nine starts, he allowed a total of 12 runs and 40 hits.15 He pitched a 10-inning three-hit shutout of Memphis on April 23.16 Against Montgomery on May 14, he threw a one-hitter but lost the game, 1-0.17 On June 10, he shut out Montgomery in a 10-0 rout.18 One month later Lelivelt joined the Detroit Tigers, managed by Hughie Jennings. The Cleveland Plain Dealer called Lelivelt, “the star of all the minor league twirlers of the country this year,” and added, “His terrific speed, quick-breaking curve, finished style, burly personality, and general baseball ability all point” to success in the major leagues.19 The Tigers paid the Mobile team $2,800 and two players, a sizable investment, to acquire Lelivelt,20 outbidding the Philadelphia Athletics and Cincinnati Reds.21

On July 19, 1909, Lelivelt made his major-league debut in Detroit by pitching a complete game against the New York Highlanders. He pitched fairly well but lost the game, 5-3. Ty Cobb hit a two-run homer for the Tigers. The Detroit Free Press reported that Lelivelt “made an excellent impression” and showed “plenty of speed” along with a “good curve and good nerve.”22 A month earlier, his brother, Jack, had made his major-league debut with the Washington Senators. It had taken just five years for the Dutch duo to go from the Chicago sandlots to the American League.

Bill had a sore arm after his debut, and with the Tigers in a close pennant race, Jennings had no choice but to keep the rookie on the bench. Lelivelt’s second major-league appearance came on August 27 when Jennings put him into a game with the Tigers leading 15-0. In three innings, Lelivelt surrendered six runs, eight hits, and two walks.23 He occupied the bench in September while Detroit competed for the pennant. After clinching the title, the Tigers were honored by a parade in Detroit on October 2.24 They played a 10-inning game that day against the Chicago White Sox, and Lelivelt threw three scoreless innings of relief. The next day, in Chicago, he started the game and allowed one run on six hits in five innings. It was a thrill for Lelivelt to pitch in his hometown as a member of the AL champions. In his four appearances for the Tigers, he had a 4.50 ERA in 20 innings. He rode the bench as Detroit lost to the Pittsburgh Pirates in the World Series.

Over a four-week period in November 1909, the Tigers played a series of 12 games in Havana, Cuba, against the Havana Reds and the Almendares Blues.25 During the trip the Tigers were feted with banquets, parties, and sightseeing excursions.26 Several Tigers, including Cobb and Sam Crawford, stayed home, and so Detroit fielded a makeshift lineup that bore little resemblance to the AL champions. Only three Tigers pitchers – Lelivelt, Ed Willett, and George Mullin – made the trip; when not pitching, one of them played right field for the shorthanded squad.

Lelivelt twice defeated the Havana Reds; he won the second game of the series by a 5-3 score in 10 innings,27 and he delivered a 2-0 shutout in the fourth game.28 The Reds featured two great American Negro players, John Henry “Pop” Lloyd and John Preston “Pete” Hill; both would be inducted into the Baseball Hall of Fame. Lelivelt returned to the mound for the seventh and ninth games of the series but lost both games to the Almendares Blues by identical 2-1 scores. These were spectacular pitching duels. Eustaquio Pedroso threw an 11-inning no-hitter in the seventh game,29 and future Hall of Famer Jose Mendez tossed a five-hitter in the ninth game.30 In the series finale, Lelivelt lost 9-1 to the Reds in an error-filled game. The Tigers won only four of 12 games in the series, but Lelivelt pitched well, with a 1.60 ERA in 45 innings.

At spring training in 1910, Tigers veterans predicted that “this will be a fine year for the big Chicago boy.”31 It was reported that Lelivelt “gets the ball away from him faster and has lost that ‘jerky’ motion which characterized his delivery last year.”32 Although there was stiff competition for a spot on the Tigers pitching staff, Lelivelt made the team, despite a sprained ankle.33 On May 6 he pitched a complete game in Detroit against the White Sox, allowing six hits and one earned run in a 4-0 loss.34 Jennings had carried an extra pitcher on his staff coming out of spring training, but in mid-May, it was time to send a pitcher to the minors. The Tigers planned to demote Ralph Works, but when Works did not clear waivers, Lelivelt was the odd man out and was sent to the Minneapolis Millers of the Class A American Association.35

The Millers were managed by Joe Cantillon, who had managed Bill’s brother, Jack, in Washington the previous season. Bill helped the Millers win their first American Association pennant in 1910. On May 23 he threw a five-hit shutout against Kansas City.36 On June 10 he allowed three hits in a 3-1 triumph over Toledo.37 Two weeks later, he defeated Indianapolis, 3-2, and hit a home run; it was the Millers’ 13th consecutive victory.38 Lelivelt finished the season with an 8-7 record in 159 innings, which did not earn him a promotion. The Tigers sent him to the Montgomery (Alabama) Billikens of the Southern Association for the 1911 season.

Lelivelt’s 8-8 record for Montgomery in 1911 was not enough to earn his return to the Tigers. His two best games of the season came against Mobile: a one-hitter on July 6,39 and a 12-inning, four-hit shutout on July 11.40 He returned to the Montgomery team in 1912, and on April 13 he allowed seven hits in a 9-4 victory over Birmingham; 21-year-old Casey Stengel played center field and had four hits for Montgomery.41 On April 24 Birmingham knocked Lelivelt out of the game by scoring six runs in the first inning.42 Montgomery released him and he was signed by Mobile. On May 14 Memphis scored seven runs on 13 hits off Lelivelt,43 and Mobile released him. Cantillon, though, wanted him back. Lelivelt rewarded Cantillon’s faith in him with a 7-1 record for Minneapolis, including the near-perfect game on August 2. The Millers again won the American Association pennant. In the offseason, Lelivelt married Edith Carpenter, a “pretty cowgirl singer,” in a ceremony at Pueblo, Colorado.44

In April 1913 Lelivelt was bothered by rheumatism, so Cantillon assigned him to the Minneapolis Rough Riders of the Class C Northern League for conditioning purposes.45 Lelivelt refused the assignment and was released. He had a brief trial in mid-June with the St. Louis Terriers of the Federal League46 (the year before it became a major league), and then he joined the Springfield (Illinois) Watchmakers of the Three-I League. Lelivelt had no trouble with Class B competition; he compiled a 10-6 record in 135 innings for Springfield in 1913, including two shutouts against Quincy and two against Bloomington.47 The next year he had a 14-8 record48 for Springfield in 212 innings.

After the 1914 season, Bill and Edith settled in Chicago with their newborn son, William Jr. Bill realized that at age 30, time had run out on his baseball ambitions, so he retired from the game. He worked for the city of Chicago, first as a truck driver and later as an engineer.49 He returned to professional baseball briefly in 1924, as the secretary of the Lincoln (Nebraska) Solons of the Class A Western League.50 Lelivelt died of cancer in Chicago on February 14, 1968, at the age of 83, and was buried at St. Adalbert Cemetery in Niles, Illinois.