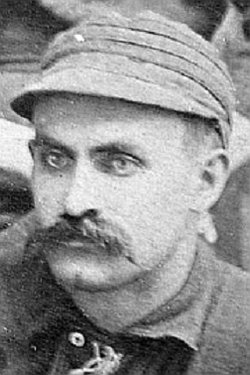 In 1884, Henry Lucas founded the Union Association as a third major league to compete against the existing National League and American Association. His club, the St. Louis Maroons, was by far the best club in the league, winning its first twenty games and putting together a 27-3 record going into the game on June 13, 1884. That is when C.V. Matteson, a 22-year-old from Ohio, made his one and only major league start, pitching for the Maroons in St. Louis against Cincinnati. The game was a makeup game for the one started on June 9, which was called in the second inning on account of rain. Matteson was described as a “phenomenon” and “very speedy” in one local newspaper the morning of the game.1 At the end of the day, despite earning the win, the review of his performance was that “Matteson, the new St. Louis pitcher, did not pan out.”2 Matteson went back to Ohio. The Maroons went on to win 66 more games against just 16 more losses to finish at 94-19, 21 games ahead of second place Cincinnati.3

How did a small-town, little-known kid from Ohio wind up pitching for a major league club in St. Louis in June 1884? That is the central question for the story of Clifford Virgil Matteson, born in Seville, Ohio, on November 24, 1861. Most of what is known about his life and family while growing up comes from a book written by his sister, Mary Irene Matteson Wilbur (1872 – 1957) in 1938, which was a collection of memories from their mother and herself. Their mother, Mary Hulburt, was born in Medina County, Ohio, in 1833. Her parents (Halsey Hulburt and Betsy Moses) were among the early settlers in the area in 1831. In the 1850s, when their mother was in her teens, her family’s house was a stopping point on the Underground Railroad for slaves en route to Canada. Their father, Horace Matteson, was born in Freetown, New York, in 1826.

The Matteson line from which Horace descended was thought by Mary to trace to Henry Matteson (1648 — 1690), who came to the United States in the 1670s to what is now Rhode Island.4 Horace’s family settled in Litchfield, Ohio, around 1836. Horace began teaching at the school in Seville starting at age 18, boarding at the houses of his students around town on a rotating basis, including the Hulbert house. He transitioned to selling insurance in 1848, and subsequently opened a clothing store in town. Horace and Mary were married in Westfield, Ohio, in 1852. Cliff was the fourth of seven children, while Mary Irene was the second youngest.

Cliff’s baseball record is far less clear than his personal life and family history. His sister notes about her siblings:

“Whether it gave her [their mother] satisfaction that her sons played base-ball with some distinction I often wonder. Cliff and Fred Taylor kept alive the Seville Baseball team, and actively participated for more years than is believable. Cliff quit at fifty. And her youngest son is unforgotten for his part on the University of Michigan nine, in his day, when that team was Champion of the West.”5

Cliff’s youngest brother David (1875 — 1940), played ball at the University of Michigan 1898 — 1900, with Michigan winning the Big Ten Championship in 1899, before becoming a doctor. Brother Claude also played baseball, appearing with Cliff in a team photo for the Seville Ball Club of 1895. Across the front of the uniforms in the photo, you can make out the name “Matteson;” likely Cliff helped sponsor the club.

Cliff’s professional career appears to have started in 1884, when he signed with “an Eastern base ball club at $85 per month.”6 That club was the New Castle Neshannocks of the Iron & Coal Association.7 He played with that club for less than a month and was released before his one game with the Maroons. No box scores or statistics from his time with New Castle have been discovered. On June 13, the Maroons played the Cincinnati Outlaw Reds in St. Louis at Union Park. “Matteson, their new pitcher, and Jack] Brennan filled the points.”8 The starter for the Reds was George Bradley, who had won 45 games for the St. Louis Brown Stockings in 1876, the first season of the National League. Bradley was in his final season as a pitcher in the major leagues, and he would win 25 games for Cincinnati in 1884, but this game was not one of them. “Bradley was batted so hard that in the fourth inning he changed places with Lou] Sylvester,” who started the game in left field.9 St. Louis scored thirteen runs in the first four innings but scored just three more off Sylvester in the remaining five innings. Matteson fared only a little better than Bradley. He allowed 11 runs in six innings (but only two earned runs, according to the box scores) before switching places with Billy Taylor in center field. (Primarily a pitcher in 1884, Taylor won 25 games against only 4 losses.) Taylor tossed three scoreless innings to finish the game for the Maroons. Matteson earned the win, despite his poor performance. Cincinnati made twelve hits overall for twenty total bases. Matteson allowed nine of those hits while striking out three and walking three. He was 0-for-4 at the plate and had two assists.

Matteson would try his hand (or rather arm) at professional baseball once more, in 1886 for the Augusta Browns in the Southern League.10 The Browns had one steady starter during the season, Charles Holacher, but auditioned numerous other pitchers looking for a second one. Matteson was given two starts in June. His first, on June 2, was very successful. He pitched a three-hitter against Savannah, walking four and striking out three. “Matterson [sic], the new pitcher, played a good game. We are not prepared to express an opinion as to him until we have seen more.”11 One of his teammates was Heinie Kappel, who had played with Matteson during his short stint at New Castle in 1884. Another was Lou Sylvester, from the game against Cincinnati two years prior. His second start was the opposite of his first, as he was “pounded out of the box in two innings,” allowing seven runs in a 9-6 loss to Charleston.12 He played a third game for Augusta in the outfield (presumably between the two starts).

After his one game with the Maroons, Matteson had returned to Seville, where in March 1885 he married Cora Abbott (born 1866), of Montville, Ohio. The couple, who would be childless, lived on Center Street in Seville with her parents. When his father retired a year or two later, Cliff took over the Matteson Dry Goods and Clothing Store. The building, with “C V Matteson 1903” along the top, still stands near the intersection of West Main and Milton in Seville, Ohio.

While he may not have had children of his own, Cliff was likely popular with the local children:

“C.V. Matteson made a bunch of little girls happy on New Year’s day. For several days he had a sign on his store windows for all little girls under twelve years of age to come in at ten o’clock New Year’s day. Well, say, how they flocked in. Each little girl got a doll and a little sack of candy and the little folks think C.V. is the best ever.”13

Cliff became involved in local politics. He ran for state representative in 1905, losing in the Republican primaries.14 He then served as mayor of Seville in the mid-1910s.15 Mary described her brother as an expert shot, at one point holding the Medina Country record for clay pigeons with 50 out of 50.16 He and his brothers were also sharp storytellers, a skill they acquired from their father. Mary noted, “Nothing could be gayer than to listen to my five brothers, seated in a ring in the sitting room telling amusing stories, popping them in so fast and aptly that never a second elapsed.”17

The last ad for the dry goods store (under Cliff’s name) appeared in the Medina newspapers in late 1921, around the time Cliff would have turned 60. It seems likely that he retired at that point, as his father had done before him. Cora died in 1923. Cliff became mayor again in the late 1920s or maybe 1930. He died on December 18, 1931, while serving as mayor. He attended the Seville village fireman’s amateur show fundraiser the evening of December 17 and ate at a midnight luncheon after the program. Shortly after, he suffered acute indigestion and died. He is buried in Mound Hill Cemetery in Seville with his wife and parents. Oddly, his tombstone reads “Virgil Clifford Matteson.”

Cliff was inducted into the Medina County Sports Hall of Fame in 2018. He was an avid supporter of baseball and his town his entire life, with his lone major league appearance only a footnote in a long life. Sadly the answer to how he wound up playing that single game for the Maroons is lost in time.

US Census data was accessed through Geneology.com and Ancestry.com, and other family information was found at Ancestry.com and FindAGrave.com. Stats and records were collected from Baseball-Reference unless otherwise noted. Articles cited in this biography were typically accessed through Newspapers.com and/or Geneology.com. Cliff’s sister, Mary Matteson Wilbur, printed a biography about her mother, Memories of Mary Hurlburt Matteson; with lineages of Mary Hurlburt and Horace Matteson, in 1938. A scanned copy can be accessed online at the Internet Archive. An article by John Gladden about Matteson was published in the July 14, 2009 edition of the Medina Gazette (Ohio). This article can be found online here. Albert Grindle, Sports Editor of the Medina Gazette was kind enough to answer my query about Matteson with the text from an article he wrote in 2018 about Matteson and other inductees into the Medina County Sports Hall of Fame.

3 Or third place, if you consider that Milwaukee, a late substitute into the league, with its 8-4 record finished with a higher winning percentage than Cincinnati (69-36, .657). Milwaukee was considered to be 35.5 games behind St. Louis.

4 There is extensive genealogy of the Matteson family online.

10 Various papers, including the Augusta (Georgia) Chronicle, covering the games in the Southern League in which Matteson appeared referred to him as Matterson, Mattison, or Matteson. It is unclear to the author of this biography how this player was determined to be Matteson, but he is credited with the record on Baseball-Reference and in several articles in the Medina (Ohio) Gazette.