This article was written by James Lincoln Ray 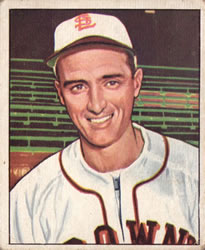 Starr spent the rest of his professional career in Class Triple-A. In 1952 and 1953 he pitched for the Baltimore Orioles of the International League, a Philadelphia Phillies farm team. In two seasons, Starr was 21-21. At the conclusion of both seasons he pitched in the Venezuelan Winter League with the Caracas Lions and Magellan's Navigators; in 1953 he appeared with the Navigators in the Caribbean Series.