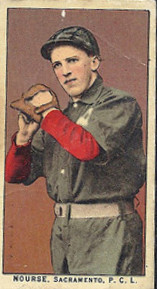 Chet Nourse was a native of Ipswich, Massachusetts, and a pitcher for Brown University who shut out Harvard on a two-hitter in 1909 and began to attract attention. In the spring of 1909 it was announced that he would join the Chicago Cubs after he graduated from college – but it wasn’t Nourse who made the announcement. In fact, he’d agreed to join the Boston Red Sox but asked them to withhold the news until after graduation. He was a catcher as well as a pitcher in high school, but focused on mound work in college, and in four years never yielded more than six hits in a game.

Nourse was born on August 7, 1887, in Ipswich, a coastal community about 30 miles north of Boston on the North Shore of Massachusetts. It was first settled in 1633. His father, Luther, was a Massachusetts native born of Massachusetts natives; he worked as a provision clerk. His mother, Mary (Newmarch) Nourse, bore and raised four children. At the time of the 1900 census, the family lived in Newburyport, a coastal city about a dozen miles north of Ipswich. Chester’s siblings, Cora (born in 1878), Frank (1882), and Parker (1884), all worked as shoe cutters. Chester was still in school at the time. He graduated from high school in Newburyport in 1905.

On May 17, 1907, Nourse, pitching for Brown, threw a two-hitter beating Lafayette, 1-0. He doubled in the third inning and scored on teammate Hamilton’s double – the only two hits for Brown. On May 29 Nourse two-hit Harvard, winning another 1-0 pitchers’ duel. The team captain, catcher Raymond, and Nourse, according to the New York Times, “form as strong a college battery as any in the country.”i

Nourse first turned up in Sporting Life as having traveled with four other Brown University baseball players to Tarboro, North Carolina, “where they will make up a nucleus for a team in the State League there.”ii He picked up another sort of job after the 1907-08 academic year – he was hired to coach the baseball team at the Attleboro, Massachusetts, high school.

But in February 1909 Nourse said he would not pitch for Brown in his senior year because of his commitment to his studies.iii In fact, he did pitch, winning once again against Harvard with a 2-0 shutout on May 19. Throughout his four years of pitching for Brown, he never once gave up more than six hits. Nourse graduated from Brown in 1909 with a bachelor of science degree in electrical engineering. He did some graduate work at Harvard.

A story datelined May 31 from Providence said Nourse would be joining the Cubs. There had been stories to that effect since April. Nourse was described as “a giant twirler and stands six feet tall in his stocking feet.” In fact, he was 6-feet-3 and was listed at 185 pounds. “Manager Frank Chance and Johnny Evers have sized up Nourse and declare he will make a greater find than Christy Mathewson. Nourse has mowed down everything in the college line this spring,” Sporting Life wrote.iv On June 2 several newspapers reported that Nourse had signed with the Cubs. It must have been amusing for Red Sox owner John I. Taylor, since Nourse had given him his word that he would sign with the Red Sox after he graduated from college. Neither Nourse nor Taylor denied the reports. On June 14, after graduating with honors in Brown’s engineering department, he signed with Boston.

After Nourse joined the Red Sox, manager Fred Lake’s team went on a road trip for almost all of July, from the 7th through the 28th. He was left back in Boston, and later joined the team before the two games in New York on the 27th and 28th. His debut came on the 27th.

Biff Schlitzer began that day’s game against New York, but he couldn’t get out of the second. Nourse took the mound and pitched better in 2⅓ innings, giving up one hit and two walks while striking out one. Larry Pape followed Nourse, who’d been taken out for a pinch-hitter, but Pape didn’t pitch all that well. “Nourse was not hit as often as his colleagues, but he was weak and manager Fred gave him short shrift,” a New York Times reporter wrote.v It’s not clear what about Nourse’s performance was deemed weak. New York won, 6-0.

Lake did offer his opinion that “the Red Sox have in [Ray] Collins and Nourse the best college pitchers of the year.”vi

Nourse relieved again three days later, coming in for Collins in the eighth, and let in one inherited run – in part due to his own throwing error – and then let in four more runs for which he bore full responsibility. That put the icing on a 10-4 St. Louis victory.

On August 4 Nourse was the third pitcher in a game against the Detroit Tigers. He didn’t shine this time, either. Three chances, five innings, five hits, five walks, and that left him with a 7.20 earned-run average. It was the last game he pitched in the major leagues.

Nourse was farmed out to the Eastern League’s Baltimore Orioles, still kept on a string in the Boston system. He was with the Red Sox spring training traveling party that traveled to Redondo Beach, California, in 1911, but was quickly farmed out and didn’t actually play for Boston that spring.

The Red Sox had a relationship with Charlie Graham’s Sacramento ballclub and Nourse pitched there in 1910 and 1911. He was released to Sacramento in April 1910. He was knocked out of the box by the Angels in his very first game, on April 27, after giving up three bases on balls and two singles. He didn’t even make it through the first inning. He walked home two runs with bases-loaded walks about a week later, on May 5. Despite that inauspicious start, Nourse earned a 9-13 record with a 2.75 earned-run average for the Pacific Coast League club that year, appearing in 32 games, 26 of them starts. At some point during the season, he broke the third finger on his pitching hand – he was a right-hander – and it never healed properly. In fact, he had the finger amputated on December 19 at Newburyport’s Anna Jaques Hospital to prevent blood poisoning. Sporting Life said, “It is claimed that the operation will not affect his power as a pitcher.”vii

In early August Sacramento released Nourse. He had been 5-5 with a 3.52 ERA in 15 starts, and had relieved in another eight games.

Nourse’s time in organized baseball had lasted a little over two years. He returned home to Newburyport and married Bertha Frances Houston there in January 18, 1913. He was listed as an engineer at the time of the marriage. At the time he registered for the World War he was listed as a mechanical engineer for the Fiberloid Corporation.

Come 1920, Chet and Bertha had moved to Springfield, in western Massachusetts, where he worked as a mechanical engineer for a manufacturing company. A decade later they were back in Greater Boston, living in Melrose, with Chester Jr. (13) and Virginia (10) and Bertha’s mother, Inez Houston. Chet was working as an industrial engineer for a milk plant, almost certainly H.P. Hood, and making a substantial $10,000-per-year income. The 1940 census has the family of five still intact, with Chet still working for Hood. In fact, he had been quite successful with Hood, serving as a director and member of its executive board from 1924 to 1948, when he retired.

Nourse moved to Wolfeboro, New Hampshire, after retirement. He died of nontropical sprue while on vacation in Clearwater, Florida, on April 20, 1958. He was survived by a daughter, a son, two sisters, and four grandchildren.viii He is buried at Oak Hill Cemetery in Newburyport.

In addition to the sources noted in this biography, the author also accessed Nourse’s player file and player questionnaire from the National Baseball Hall of Fame, the Encyclopedia of Minor League Baseball, Retrosheet.org, and Baseball-Reference.com.