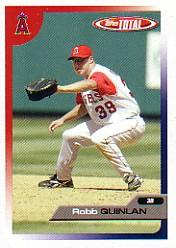 The way Robb Quinlan viewed it, either choice he had in 1995 was a good one. He could make the same decision his older brother Tom had made nine years earlier and sign a professional baseball contract, or go to college and play baseball.

At the time of the 1995 amateur draft—Quinlan was selected by the Anaheim Angels in the 33rd round—Tom Quinlan was in his ninth professional season. In his nine-year career, Tom Quinlan had made just three brief appearances in the major leagues (totaling 58 at-bats).

Robb Quinlan said his older brother didn’t try to influence him. “He pretty much left it up to me,” said Quinlan. “Either way [pro ball or college] was a very good opportunity. He [Tom] chose one path. I chose the other.”

Quinlan declined the Angels’ reported signing bonus offer of $180,000 and enrolled at the University of Minnesota. “It was a fairly easy decision,” said Quinlan, who was born on March 17, 1977, in St. Paul. “For me, at that time, Tom was bigger and more developed than I was at the same age. It had always been a big thing for me to go to college—to work on my game and get stronger. I enjoyed school.”

The decision worked out for Quinlan, who earned a degree and left his name all over the Minnesota Gophers’ baseball and Big Ten Conference baseball record books.

After hitting .325 as a freshman for the Gophers in 1996, the right-handed-hitting Quinlan earned first-team All-Big Ten honors the next three seasons. His batting average went up each season—.363 as a sophomore, .408 as a junior, and .413 as a senior. As a junior, Quinlan set a Gophers single-season record with 24 home runs and the school single-season record for hits (97) as the Gophers won a school-record 45 games. As a senior, Quinlan hit 16 home runs and drove in a school-record 84 runs as the Gophers went 46-18. During his senior season, he became the Big Ten Conference’s career hits leader (345), surpassing the previous record set by Indiana’s Alex Smith (306) set in the 1980s.

Quinlan is No. 1 in seven school career categories and is ranked in the top five in four other categories. His 55 career home runs broke the Gophers record of 45 set by Tom Steinbach from 1980 to 1983 and also are a Big Ten Conference record.

“He handles ups and downs as well as any player I’ve coached,” Gophers coach John Anderson told the Minneapolis Star Tribune in April of 1999. “That’s the part of him I like the most—his makeup. He’s got tremendous baseball makeup. He just knows how to play the game.”

Despite being named a second-team All-American as a junior, Quinlan was not selected in the amateur draft that June. Apparently major-league organizations thought Quinlan wanted too much money to forego his senior season.

That summer, Quinlan played for the St. Cloud River Bats of the Northwoods League, a wood-bat league for college players. Quinlan batted .353 with 11 home runs and 47 runs batted in (RBIs) and was named the league’s Most Valuable Player (MVP). While playing for the River Bats, Quinlan, who had been a middle infielder in at Hill-Murray High School in the St. Paul suburb of Maplewood, and started his Gophers career as a third baseman, continued to learn a new defensive position—first base. As a senior for the Gophers, he committed just one error at first base.

“He was a shortstop in high school, but we knew he wasn’t going to be a shortstop [in college],” said Anderson. “He played third base and outfield for us the first two years. We found him a home at first base. He gave our infield stability. It was a great move. He was a great leader in the field. He played outstanding there for us.”

Following Quinlan’s senior season, the Angels, who had selected him four years earlier, again drafted him as they selected him in the 10th round of the amateur draft. “We definitely liked his bat potential,” said Angels General Manager Tony Reagins.

After signing (receiving a reported signing bonus of $17,000), Quinlan began his professional career with Boise (Idaho) of the Class A Northwest League. During his climb through the Angels farm system, one thing was constant for Quinlan—he hit at each level.

“I never doubted that he would make it in pro ball,” said Anderson, who has coached 76 players who have signed professional contracts and 15 players who reached the major leagues. “He had back-to-back record years for us. He had a consistently solid four years and two great years. He’s hit at every level and kept moving up.”

In 73 games with Boise in his inaugural professional season, Quinlan led the Northwest League in hits (95), at-bats (295) and RBIs (77) while hitting .322. Quinlan was named the league’s MVP. One of the highlights of Quinlan’s season was driving in eight runs in a game against Yakima on July 6, 1999.

In 2001, Quinlan batted .295 with 14 home runs and 79 RBIs for Arkansas of the Class AA Texas League. Quinlan, who was fifth in the league with 145 hits, played in the Texas League All-Star game.

Quinlan’s fourth professional season showed he was ready for the major leagues, as he was named the Angels’ Minor League Player of the Year for hitting .333 with 31 doubles, 13 triples, 20 home runs, and a league-high 112 RBIs for Class AAA Salt Lake. The season included a 21-game hitting streak (he batted .440—40-for-91—during the streak, which ran from May 29 to June 20) and two five-hit games. On May 12, he was 5-for-5 with two home runs and eight RBIs versus Edmonton, and on July 28 he was 5-for-6 (hitting for the cycle) with two home runs and seven RBIs against Colorado Springs.

That season he also showed his versatility as he moved from first base to the outfield. “Salt Lake had a first baseman returning [Larry Barnes] but was short on outfielders,” said Quinlan. “I said I could play outfield. By moving to the outfield, I probably stayed at Triple-A, instead of going back to Double-A.”

Quinlan returned to Salt Lake at the start of the 2003 season but was recalled by the Angels on July 27. Quinlan made his major-league debut the next day, going 0-for-3 in the Angels’ 2-1 victory over Oakland in Anaheim. Quinlan’s first four major-league starts came against Barry Zito, Andy Petitte, Roger Clemens, and David Wells. Quinlan, who had hit .310 in 95 games with Salt Lake before being recalled, went 5-for-13 in those starts and went on to hit .366 (15-for-41) in his first 13 major-league games. In 38 games with the Angels in 2003, Quinlan hit .287.

Despite the solid showing, Quinlan started the 2004 season at Salt Lake. He was recalled on May 6, returned to Salt Lake on June 8, and recalled again on June 11. After hitting .296 in 27 games with Salt Lake, Quinlan went on a tear with the Angels. He batted .407 with 15 RBIs in July to be named American League Rookie of the Month.

On July 7, he began a 21-game hitting streak—the longest by a rookie in Angels’ team history. Quinlan batted .425 (34-for-80) during the streak, which ended on August 10. The streak featured Quinlan’s first career home run—off Ron Villone in the sixth inning of the Angels’ 8-4 victory in Seattle.

But six days later Quinlan’s season came to an abrupt end when he tore his left oblique muscle during batting practice. He spent the rest of the season on the disabled list. Because of the injury, he missed the Angels’ post-season appearance. In 54 regular-season games with the Angels, Quinlan batted .344.

Finally in 2005, Quinlan made the Angels’ Opening Day roster. His season was again interrupted by a stint on the disabled list. From July 1 to August 22, he was idled by a neck and shoulder injury. In 54 games, he batted a career-low .231. Quinlan made his post-season debut in 2005, making one start in the Division Series against the New York Yankees. In the American League Championship Series, Quinlan started Game Two and hit his first post-season home run—a solo homer in the Angels’ 2-1 loss to the Chicago White Sox.

Quinlan spent his second full season with the Angels in 2007, making 41of his 48 starts against left-handing pitching. For the season he batted .247 with three home runs and 21 RBIs in 79 games. Quinlan made starts at five positions—first base, third base, left field, right field, and designated hitter. He made just two errors in the field.

“I’m very grateful where I’m at,” said Quinlan, who signed a two-year contract prior to the 2007 season, “but yet, I would like to be given a chance to play every day and see what I can do. At the same time, Anaheim has been a great organization to play for.”

After five seasons in the big leagues, Quinlan had a .290 career batting average.

“It would be interesting to see if Robb would get the chance to get 500 to 600 at-bats,” Anderson said. “No one has played him long enough. Players get a label of not having a position. I think that stereotype has come into play. You have to ask, ‘At all the positions he’s played, has he played poorly?’ I don’t think so.

“He’s a professional hitter. He uses the whole field. He reminds me of Paul Molitor with his ability to see the ball, and, with his bat speed, he is able to wait until the ball is deep in the hitting zone and still hit it hard.”

Anderson believes the Angels have learned something about Quinlan. “The Angels organization is loaded with prospects,” said Anderson. “Robb is a player you can’t watch just one time. To appreciate him, you have to watch him for a week. I think they’ve found out that he’s a team guy—a leader and a role player that has a value on the team.”

While at a coaches’ convention, Anderson got some unsolicited praise of Quinlan. “When I was at the ABCA [American Baseball Coaches Association] convention,” said Anderson, who was inducted into the ABCA Hall of Fame in January of 2008, “a coach from Cal Poly Pomona came up to me and introduced himself. He said he throws BP [batting practice] for the Angels. He said Robb is a leader of that team, that everyone respects him and everyone likes him.”

Reagins, who has worked for the Angels since 1991, agreed. “He’s always hit for us,” said Reagins. “He’s hit left-handed pitching really well. He could do damage if he got 500 at-bats. But a team needs guys like him [because during a season] things happen on a daily basis. He’s one of our leaders. He’s a great clubhouse guy and a great teammate.

“It’s tough to be a leader when you don’t play every day. But a player can have an impact on a team in a variety of ways—by being a good teammate, having a good makeup, being a good supporter. [Then] when you do get an opportunity to play, by being productive. He’s done that. He’s a talented guy. We’re very happy with him.”