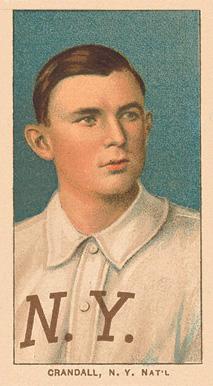 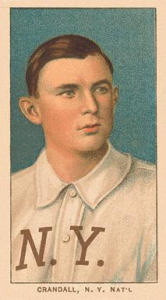 Doc Crandall is generally regarded as the premier relief specialist of the Deadball Era. Though he never led the National League in saves, he did lead the league in relief appearances each year from 1909 to 1913, and from 1910 to 1912 he led the NL each year in relief victories, compiling an overall record of 45-16. “Crandall is the Giants’ ambulance corps,” wrote Damon Runyon after the 1911 campaign. “He is first aid to the injured. He is the physician of the pitching emergency, and they sometimes call him old Doctor Crandall. He is without an equal as an extinguisher of batting rallies and run riots, or as a pinch hitter.” In the latter role the .285 lifetime hitter never really excelled, batting just .229 in 96 pinch at-bats over the course of his 10 seasons, but one reporter nevertheless proclaimed him “the only pinch-hitting pitcher ever developed in the Big Leagues.”

James Otis Crandall was born on October 8, 1887, in Wadena, Indiana, a town with fewer than 60 inhabitants but a long baseball history. Three Wadena residents, the Rowley brothers (Warren, Frank, and Tom), organized the town’s first club in the late 1860s or early 1870s and later played organized baseball with George and Harry Wright. Two generations later, four more Wadenans went on to play organized baseball. One of them was Fred “Cy” Williams, who led the National League in home runs four times. The other three, fittingly, were brothers: Otis, Karl, and Arnold Crandall. Their father, Mark, had been part of the second generation of Wadena ballplayers in his youth, and later owned a farm and co-owned the Crandall Mead & Co. general store, which sponsored the town baseball team. Once the chores were done on the farm and at the store, he had no qualms about his sons taking off for an open pasture to play ball with friends. The same went for young Williams, who also worked in the store as a clerk.

“Ote” (as his brothers called him) made the jump from the town team to semipro ball before turning 15, pitching for the Brook club in 1902. The next year he tried out for the club in Fowler, the county seat, but caught on with a team from Frankfort, Indiana, when Fowler passed on him. In 1906 Crandall reached Cedar Rapids of the Three-I League, where he caught the attention of John J. McGraw, manager of the New York Giants. In My Thirty Years in Baseball, McGraw wrote that in reviewing the list of players available for the 1907 draft, he noticed a Crandall playing for Cedar Rapids. The Giants manager knew nothing about the player, but he had been the Cedar Rapids shortstop early in his own professional career, felt warmly toward the club there, and decided to take Crandall on that basis alone.

When he arrived for spring training in 1908, Otis found that the Giants had no uniforms available that would fit his stocky frame. Unfazed, he shagged flies in his street clothes for a couple of days. McGraw eventually found him a uniform and a position on the club when it went north. Crandall was a good groundball pitcher, and McGraw had the infield to take advantage of that style. The 20-year-old rookie said little, listened intently, learned quickly, and worked tirelessly. In his first big-league season, Crandall started 24 games, completing 13, and relieved in eight others. It was the only year in his six with the Giants in which he started more games than he relieved. “Crandall was one of the coolest pitchers I ever saw,” McGraw recalled. “He had no fear, no nerves.”

Doc Crandall’s career as a relief specialist began in 1909, when he started only seven games but relieved in 23. McGraw had experimented with relief pitchers before; in addition to sending in Christy Mathewson to extinguish rallies, he had also used Cecil Ferguson almost exclusively in relief in 1906, when Ferguson led the NL with seven saves. In an era when financial concerns prevented clubs from carrying anywhere near the full 25-man roster permitted by league rules, some considered McGraw’s use of relief pitchers an extravagance, but most acknowledged Crandall’s aptitude for the role. He posted a career-high six saves in 1909, and five in each of the next two seasons. Crandall’s best overall year was 1910 when he appeared in 42 games, a career high. He went 17-4, relieving in 24 games and starting 18. Nine of his starts came during September when he filled in for the injured Red Ames. Proving that he was not just a “failed starter” converted to relief because of an inability to finish games, Crandall pitched seven complete games and won all of them.

During the following off-season a rumor spread that Crandall had lost his right thumb in a butchering accident. He showed up in Marlin with all ten digits, however, and was also in the best shape of his career. McGraw gave Crandall his first managerial experience that spring, entrusting him with one of three Giant touring squads that played exhibitions throughout Texas and the South. Doc was at his most versatile in 1911, though the story he told later in life about playing every position except catcher was an exaggeration, at least as far as regular-season games are concerned. Coming off a season in which he had batted .342 with power, Crandall filled in at shortstop in late June when Al Bridwell came down with “malaria.” As soon as Bridwell was able to take the field, Larry Doyle was injured in a base-running collision, so Crandall moved to second base for three games. His defense was adequate at both positions, though he did make three errors in the nine games.

Crandall also pitched in 41 games in 1911, posting a 15-5 record, but he saved his best effort for Game Five of that year’s World Series. While his teammates were falling to pieces, the quiet and calm Doc pitched the last three innings of the contest, socked an RBI double, scored a run, and earned New York’s second and last win of the series. Crandall turned in two more solid seasons as the Giants repeated as NL pennant-winners in 1912-13. During the latter year he became the first pitcher to make over 30 relief appearances (33, against only two starts), but his campaign took an odd turn on August 6 when McGraw traded him to the last-place Cardinals for catcher Larry McLean. Twelve days later, after Doc had appeared in only two games as a pinch-hitter, the Giants paid cash to get him back. One source attributes the reversal to fan displeasure; another says the Giant players were the cause, nearly coming to blows with their manager. The Sporting News at the time advanced a more credible theory, namely that St. Louis was unwilling to pay Crandall the same salary that he had earned in New York, and the pitcher was threatening to go home to Wadena.

Crandall returned to St. Louis in 1914, this time with the Federal League’s Terriers. He shed his reliever role, starting in 21 of his 27 appearances, and also played 63 games at second base, batting .309 with a .429 on-base percentage. In 1915 Crandall started in 33 of his 51 appearances, posting a 21-15 record and finishing second in the FL in innings pitched (312⅔). The St. Louis Browns acquired him in the Federal League dispersion, but he was shelled in his first two appearances and the Browns cut him loose. Coming off a 20-win season, Crandall’s career appeared to be over at the age of 28.

But Doc Crandall was just getting warmed up: over the next 13 years he became a fixture in the Pacific Coast League, starting games instead of finishing them. In 1917 he was a 26-game winner for the Los Angeles Angels, good for second in the league. In the war-shortened 1918 season Crandall won 16 games for the PCL-champion Angels, including a no-hit bid on April 7 that was spoiled with two outs in the ninth inning by his brother Karl, playing for Salt Lake City. After the PCL season ended in July, Doc got into five games with the Boston Braves for his final major-league tour. With the Angels from 1917 through 1926 and again in 1929, Crandall rolled up a 224-147 record with a 2.92 ERA. He threw the first pitch from the mound when Los Angeles’s Wrigley Field opened in 1925.

Crandall tried ownership in 1927-28 with Wichita of the Western League, where he also hurled a few games. He then returned to the majors for a four-year stint as the pitching coach for the Pittsburgh Pirates. In 1935 Crandall managed Des Moines, where his roster included his son, Jim, a catcher who fashioned a long minor-league career as player and manager. Doc ended his baseball career with two PCL coaching stints: Seattle in 1937 and Sacramento in 1938. In his later years he suffered a series of strokes that left him paralyzed. Doc Crandall died in Bell, California, on August 17, 1951, survived by his wife, Bertha, and his children Jim and Dorothy.