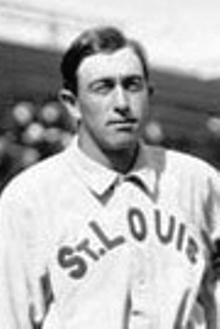 Even a cursory glance at Homer Smoot’s entry in baseball encyclopedias may register the fact that there was something very unusual about his career. A closer inspection reveals what is so odd: in each of Smoot’s five major league campaigns, he collected at least 500 at bats. The brief list of players who had at least one 500-at-bat season while never falling below that level underscores the uniqueness of Smoot’s achievement: Smoot (1902-06), Joe Cassidy (1904-05), Irv Waldron (1901), Scotty Ingerton (1911), Al Boucher (1914), Dutch Schliebner (1923), Art Mahan (1940), and Johnny Sturm (1941). How did Homer Smoot become the answer to a trivia question too hard even for the annual SABR Trivia Contest?

When the eldest of their three children was born on March 23, 1878, Luke Smoot and the former Rebecca Wheatley propitiously named him Homer. Homer spent his childhood in the small town of Galestown, on Maryland’s Eastern Shore. One of his elementary school classmates was Geneva Gordy, who would become his wife in 1901. Homer crossed the nearby Delaware state line to attend prep school at Wesley Collegiate Academy in Dover.

His early baseball career is not well documented. Smoot attended Washington College in Chestertown, Maryland, and played baseball and football. When he was elected to that school’s Athletic Hall of Fame in 1992, he was listed as a member of the Class of 1897. However, Marty Payne found that Smoot was playing for Washington College in 1898 and may also have played in 1899. In these same years, Smoot was also playing semipro baseball for Cambridge and Salisbury in his native state, and for Purcell and Laurel in Delaware.

In 1900, Smoot signed his first professional contract with the Allentown Peanuts of the Atlantic League. When the Atlantic League folded on June 12, Smoot caught on with the Worcester Farmers of the Eastern League. He spent the remainder of the season in Worcester, with the exception of ten days in which he was loaned to Providence of the same league. He returned to Worcester in 1901 and led the league with a .356 batting average.

The ongoing war between the two major leagues assured that such batting proficiency would not go unnoticed. When the St. Louis Browns joined the American League following the 1901 season, manager Jimmy McAleer saw no need to look far for players, signing two starting infielders, two starting outfielders and the top three pitchers from the cross-town Cardinals. The devastated Cardinals signed Smoot to fill one of the gaping holes in their lineup, prompting The Sporting News‘ Worcester correspondent H. T. Brewer to write in his November 9, 1901, column that Smoot should return to Worcester since, although he had “whacked the ball viciously … Homer can neither run bases nor throw.”

The Cardinals were forced to turn to other untried youngsters and were being derisively referred to as the “kindergarten team” as the 1902 season began. Smoot had earned the club’s starting center field position, but the young club staggered out of the gate with five straight losses. On April 25, the drought ended when Homer lived up to his name by clubbing two home runs, the second one in the tenth inning, to lift St. Louis to a dramatic 9-8 win. Smoot’s heroics were all the more surprising considering that fewer than 100 home runs were hit in the National League that year, with the Cardinals managing only ten.

Smoot would hit only one more home run that season, but his robust .311 batting average would help keep the young team respectable. In spite of having had to replace two of its three starters, all three members of the Cardinals’ outfield batted .300, the last time that feat would be accomplished during the so-called “dead ball era.” However, the league’s worst pitching staff consigned the club to a sixth-place finish. Smoot also disproved the criticism that he was a one-dimensional player by stealing twenty bases and tying for the league lead in putouts. A retrospective SABR project designated Smoot as the National League’s best rookie.

The 1903 season was a disaster for the Cardinals, who plummeted to the league basement. Rookie pitcher Mordecai “Miner” Brown tied for the lead on a beleaguered staff with a mere nine wins. Brown was shipped to Chicago at season’s end in what was probably the worst trade in franchise history. Smoot couldn’t quite match his fine rookie season, but hit a solid .296, and his four homers were half of the club’s total for the season. One of the home runs was particularly memorable: on July 22, Smoot hit a three-run home run on a two-strike pitch with two out in the bottom of the ninth to lift the Cardinals to an 8-7 victory.

The Cardinals rebounded to a creditable fifth-place finish in 1904. Smoot’s average slipped to .281, but he provided some timely hitting, with his career-best 66 RBI being only fourteen off the league lead. The 1905 campaign saw the Cardinals fighting to stay out of the cellar again, but Smoot put together his best season. He matched his rookie average of .311, and posted career-best totals for runs (73), on-base percentage (.359), and slugging average (.433).

However, 1906 would prove a different story. Smoot was hitting a disappointing .248 on July 19, when he was traded to Cincinnati for journeyman Shad Barry. The change of scenery didn’t do him much good, and he finished the season with a .252 average.

Smoot was only twenty-eight at season’s end and had been a major-league regular for five seasons. In spite of his off-season, it seemed reasonable to expect that he would bounce back and might even achieve the promise of stardom that had seemed likely only a year earlier. Instead, his contract was sold to Toledo of the American Association at the season’s end, and Smoot would never again appear in a major league game.

Several explanations have been offered for the abrupt end to Smoot’s major league career. One source claims that Smoot’s diminishing eyesight caused his demotion. His obituary, however, specifically claims that Smoot’s batting eye remained “undimmed,” but that he was slowed by muscular rheumatism. In addition, his daughter claimed that Smoot never had eye problems, but that his rheumatism was so bad by his career’s end that he sometimes had to stay in bed until noon to have the strength to play ball that afternoon. This testimony is supported by the fact that Smoot had averaged twenty stolen bases per season in his first four years, but swiped only three bases in 1906. In addition, after being exclusively a center fielder for his first four seasons, he saw action in all three outfield positions in 1906. Finally, it is possible that Smoot was still good enough to play in the majors but never was given the chance. In his 1910 book, Alfred Spink wrote that Smoot was “still pounds better than many outfielders in the major leagues.”

Smoot spent three seasons with Toledo, batting .312 in 1907, .301 in 1908, and .270 in 1909. He split the 1910 season between Louisville and Kansas City, but hit a lackluster .236. He started the 1911 season with Kansas City and seemed to have regained his old form. In July he was hitting a splendid .379 when his contract was sold to Wilkes-Barre of the New York State League, where he played on the only pennant-winner of his professional career. He began the 1912 season as an assistant manager and a weekend player for Wilkes-Barre, but by June his rheumatism had become too severe and his playing days came to an end.

Smoot was offered the opportunity to manage in organized baseball. However, he and his wife Geneva had started a family that would include two boys and three girls, and they preferred to see them grow up near where they had spent their own childhoods. Accordingly, he became head baseball coach at his alma mater of Washington College. After one season, he decided to leave baseball and spent the next ten years farming, raising chickens and operating a feed business in nearby Salisbury.

In 1925, Smoot was offered the opportunity to manage the local minor league club. Although the Salisbury Indians finished only five-and-a-half games out of first place in the Eastern Shore League, Smoot decided to return to the feed business. Two years later his oldest son Roger would follow in his footsteps and sign with the Cardinals’ farm system. On March 25, 1928, Homer Smoot died of spinal meningitis.

Marty Payne provided me with his extensive notes on Smoot’s career. Tom Ruane confirmed the unusual distinction noted in the first paragraph and compiled the list. The remainder has been picked up from Smoot’s Hall of Fame file, contemporary newspapers and censuses.