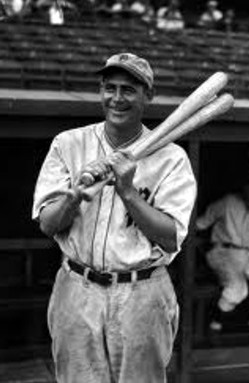 In his first five seasons in the major leagues he hit over .300 four times, clubbed as many as 31 home runs in a year, and once led the National League with 143 runs batted in. He has been compared to Will Clark and Ted Kluzewski among first basemen getting off to a hot start in the majors. During their first five years in the big leagues Don Hurst outperformed Kluzewski in every major hitting category, and topped Clark in batting average and runs batted in. Yet the exploits of Will the Thrill and Big Klu are well-known to today’s baseball fans, while Hurst is an almost obscure figure. Why? Because his career was short-lived. He was out of the major leagues before he reached his 30 birthday.

Frank O’Donnell Hurst was born on August 12, 1905, in Maysville, in northern Kentucky on the Ohio River about 60 miles southeast of Cincinnati. He was the youngest of the four children of Nannie Porter and Elmer Hurst, who divorced when he was quite young. The 1920 census showed 4-year-old Frank living in the Cincinnati suburb of Norwood, Ohio, with his mother, who was reported as the landlady of a boarding house. He probably started playing baseball while living in the Cincinnati area, but no records of it are available.

In 1923 the youngster enrolled at The Ohio State University, where he played freshman football and perhaps a little baseball before dropping out in the spring of 1924 to pursue a career in professional baseball. By this time he was known as Don, probably a shortened form of his middle name, O’Donnell. His first summer he was an outfielder for the Paris (Kentucky) Bourbons, and led the Class D Blue Grass League with a .382 batting average and 20 home runs, as well as leading in doubles and tying for the lead in triples. In addition to playing the outfield he won five and lost five as a pitcher. By 1926 Hurst had made it up to the International League, where manager Burt Shotton of the Syracuse Stars converted him from an outfielder to a first baseman. He made the International League all-star team that year. He hit well over .300 for the Stars in both 1926 and 1927. In 1927 Syracuse became affiliated with the St. Louis Cardinals. On May 11, 1928, the Cardinals traded Hurst along with catcher Spud Davis and outfielder Homer Peel to the Phillies for first baseman Bill Kelly, pitcher Art Decatur, and catcher Jimmie Wilson.

Hurst made his big-league debut at Redland Field in Cincinnati on May 12, 1928. He got off to an auspicious start, walking twice, collecting two hits in two official times at bat, scoring one run, and driving in another off the underhand slants of the Reds’ Carl Mays. A big (6-foot, 215-pound) left-handed power hitter, Don established himself as one of the National League’s premier sluggers. Playing in an era of a lively ball and in the home run-friendly Baker Bowl, he reached the majors at the right time and in the right place to post some huge numbers. From 1928 through 1930, National League run production, home run totals, and batting average increased each year, reaching all-time highs in 1930. In that season the league batting average topped the .300 mark at .303, and the teams scored an average of 5.68 runs per game, records that still stood in the 21st century. Baker Bowl, where the Phillies played their home games, was a paradise for left-handed hitters: 300 feet to right-center and 281 feet down the right-field line. Hurst took full advantage of those dimensions, hitting over .300 and slugging better than .500 in his first six years with Philadelphia. He hit 31 home runs in 1929, twice scored 100 or more runs in a season, and twice had 125 or more RBIs. (In 1932 he led the league with 143 RBIs.) Hurst was one of four Phillies to knock in more than 100 runs in 1929. Only the 1936 Yankees have had more teammates accomplish that feat.

After the 1930 season Hurst participated in a seven-game series between two All-Star teams in Havana, Cuba. Hurst played first base for a team managed by Jewel Ens, which defeated Dave Bancroft’s All-Stars five games to two. Players in this series truly deserved the designation All-Stars. Hurst’s counterpart at first base for the Bancrofts was Bill Terry, the National League batting champion, who hit .401 that season, the last time a National League hitter has topped the .400 mark as of 2011. In all, nine future Hall of Fame inductees participated in the series. Five others received votes, but fell short of election to the Hall. It is a sign of the respect with which Hurst was held that he was named to this august assembly.

In 1933 Hurst was an early-season holdout. However, he soon signed and returned to the lineup, but he slumped greatly and fell out of favor with the management. He was traded to the Chicago Cubs for first baseman Dolph Camilli on June 11, 1934, one of the all-time worst trades the Cubs have made, and they have made more than their fair share (see Brock for Broglio, for example.) Camilli went on to become a star, while Hurst was out of the majors at the end of the year. At the age of 29, he made his final major-league appearance on September 20, 1934, when he successfully pinch hit for pitcher Guy Bush. During his brief time in “The Show” he finished in the National League’s top ten four times in runs batted in, four times in bases on balls, and three times in home runs. Among leading first basemen whose major-league careers ended at the age of 30 or younger, Hurst has the highest batting average and the most runs batted in. He ranks second in on-base percentage and third in both hits and runs scored.

The Cardinals purchased Hurst from the Cubs on January 4, 1935, and assigned him to their American Association affiliate, the Columbus Red Birds. After one season with Columbus, Hurst played two seasons for the Los Angeles Angels in the Pacific Coast League. In 1939 he emerged as a player-manager in Canada, with the Hamilton Red Wings of the Class D Pennsylvania-Ontario-New York League. He played first base, pitched enough to compile a record of three wins and three losses, and managed the Red Birds to a second-place finish. That ended his career in professional baseball.

For several years Hurst was employed in a managerial capacity at the Veterans Memorial Auditorium in Culver City, California, a suburb of Los Angeles. After an illness of several months, the nature of which was undisclosed, Frank O’Donnell Hurst died en route to a Los Angeles hospital on December 6, 1952, at the age of 47. Survivors included his widow, Helen, and three sons, Don, James, and Larry. His remains were cremated.

Bill Nowlin and Kit Krieger, “La Tropical Park, Then and Now,” in The National Pastime: A Review of Baseball History, Volume 25 (Cleveland: SABR, 2005), 3-5.