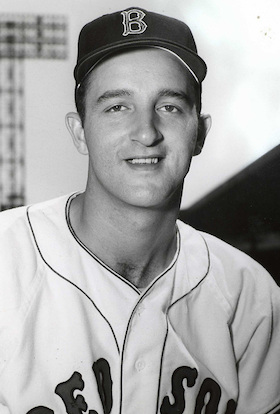 Left-handed pitcher Duane Wilson was born during the Depression in Wichita, Kansas, and made it to the major leagues, albeit only briefly, facing 34 batters over two games in July 1958.

Duane Lewis Wilson was born on June 29, 1934, the son of Lewis and Bessie Wilson, their fourth child. Lewis worked as an automobile mechanic.

Scout Danny Doyle signed Wilson to the Boston Red Sox in 1952.1 He’d come to the attention of a number of scouts when pitching Wichita to victory in the Junior American Legion sectional championship. His two-base hit was key in a four-run second-inning rally, an inning that also featured two walks, three errors, a wild pitch, and a passed ball.2 The Red Sox placed him in Class-D baseball that year, with the High Point-Thomasville Hi-Toms in the North Carolina State League. He was 9-4 with a 2.60 ERA in 104 innings of work over 21 games, and the Hi-Toms won the league pennant. Still a teenager, he moved up to Class B in 1953, pitching for Eddie Popowski’s Greensboro Patriots in the Carolina League. His load almost doubled, to 204 innings, his ERA improved to 2.21, and his record was 13-12.

In 1954 he advanced a level to Single-A ball, pitching for the Eastern League’s Albany Senators. He flipped his won/loss record from 13-12 to 12-13. His ERA was 3.76 in 194 innings of work. At the very end of the year, he got a taste of Triple-A, pitching in two games for the Louisville Colonels. He was 1-0. (He had actually been sent up to Louisville in September 1953, but not pitched.)

Wilson played for three teams in 1958 – Memphis, Minneapolis, and the Boston Red Sox. He started the season with the Memphis Chicks, and on June 23 was promoted to Boston, who sent lefty Frank Baumann to Memphis in exchange. Wilson had been 9-5 with a 2.50 ERA for the Chicks. It was a propitious time. Wilson, it was reported, “had told his wife that if the Sox did not call him up this year for a chance in the majors, he was calling an end to his baseball career. He admitted he was becoming discouraged after seven winning years in the Sox system and never being called to Sarasota, Fla. for a look.” 3

Now, midseason 1958, Red Sox manager Mike Higgins was ready to give him a shot. As for Wilson, preparing to work in Fenway Park with its looming left-field well, he wasn’t any “fence-phobe.” He said, “I don’t mean to sound chesty, but nothing bothers me when I’m pitching; all I think about is trying to pitch well.” He said he wasn’t going to give the wall a second thought “especially after pitching in places like that New Orleans Park. There the left field fence is 247 feet away and about 20 feet high. It’s 300 feet to center, and the last time I pitched there, they had eight right-handers in the lineup. But I got through it all right.”4

Now, six years later, Duane Wilson finally got his crack at the big time. He started the game on Nova Scotia Day at Fenway Park — July 3 against the Baltimore Orioles — and escaped with only one run charged against him, despite giving up eight hits and five walks in the six-plus innings he pitched. The game went on and on. Tied 2-2 after nine, it looked like it was over when Leo Kiely gave up three runs to the O’s in the top of the 10th, but the Red Sox scored three, too. In the top of the 15th, Baltimore scored two unanswered runs off Murray Wall and the whole thing was over. Wilson’s one official at-bat was a whiff. He’d laid down a successful sacrifice bunt in the fifth inning, but the runner never scored.

Joe Cashman of the Boston Record wrote that he “pitched fairly well,” likely more mindful of the one run in six innings, rather than the 13 baserunners.5 He’d loaded the bases in both the first and third, but worked out of both situations. The one run was unearned, in the top of the seventh.

Nine days later, the visiting White Sox dealt a 7-4 loss to Boston in the first of two games on July 12. Wilson started the day’s second game but didn’t last long. A walk, a single, and another walk loaded the bases in the top of the first with nobody out. He retired the next batter, but it was on a sacrifice fly to left field. After another single scored a second run, he was relieved from further duty. Mike Fornieles faced Earl Battey, who hit a three-run homer. Fornieles was tagged with the ultimate 11-5 loss, but Wilson had only pitched a third of an inning and was charged with four earned runs. Two days later the Red Sox called up rookie Bill Monbouquette from Minneapolis and sent Wilson to the Millers.

Wilson was recalled on September 1, but saw no further action.

He gave baseball one more year, pitching in Minneapolis in 1959. He started eight games, relieved in another 18, and was 3-3 with an even 3.00 as his earned run average.

After baseball, Wilson worked in Wichita as Assistant Manager for Interstate Finance Company.

Duane Wilson died on November 9, 2021. His obituary on Legacy.com said that he had retired from work  as a bank loan officer. He was preceded in death by his wife Carol Sue, but was survived by two brothers, a sister, three daughters, and numerous other relatives.