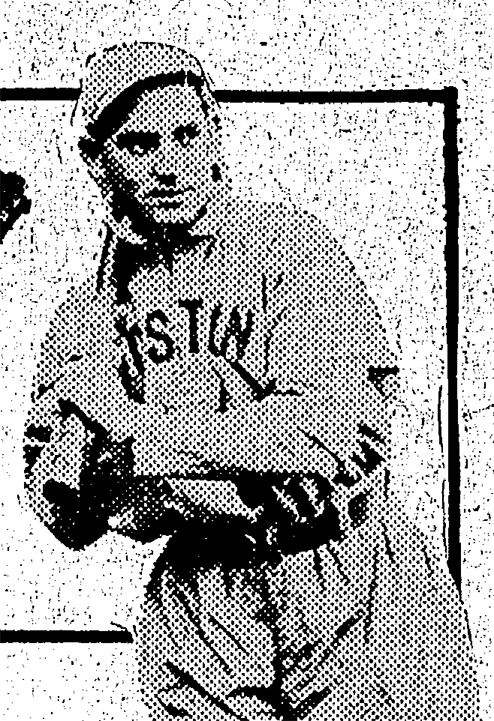 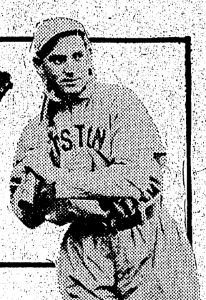 Edmund Hearne enjoyed two cups of coffee in 1910, one on June 9 and one on June 10. That was the sum total of shortstop Hearne’s experience in the major leagues. Two games, two at-bats.

“Hearn, a California recruit, played shortstop for Boston, and performed well in the field.” So read the wire-service note in several newspapers around the country the morning after Hearne’s error-free debut for the Boston Red Sox in a briskly-played game against the White Sox in Chicago lasting only an hour and 35 minutes.1 Hearne batted eighth, filling in for Heinie Wagner by playing short behind Red Sox pitcher Frank Arellanes. Hearne was 0-for-1 at the plate, despite playing the whole game. He even made the subhead in the Washington Post: “Hearn Plays Well.” Even Hearne’s walk leading off the third inning came to naught, as the White Sox won, 3-0, behind the two-hit pitching of Irving “Young Cy” Young, a former Boston National League pitcher. Hearne was credited with two putouts and two assists. Whatever Red Sox manager Patsy Donovan may have thought of Hearne’s performance was apparently not recorded for posterity, but he put him in again the following day.

The player, correctly spelled Hearne in the June 11 Boston Globe, couldn’t have been too pleased for his future prospects if he’d seen the subhead after his June 10 game against the Cleveland Naps: “Hearne Like a Sieve.” Oops. Two runs ultimately scored after his fumble of an “easy grounder” in the first inning.

Red Sox pitcher Ray Collins had allowed a leadoff single to Jack Graney. Bris Lord hit the ball to Hearne at short and was safe on Hearne’s fumble. Shortstop Terry Turner stepped into the box and hit it to another Lord — Boston’s third baseman Harry Lord (no relation) — who fired the ball across the diamond to Jake Stahl — but the ball sailed into the stands. Graney scored and Bris Lord scored when Nap Lajoie hit a sacrifice fly to Tris Speaker in center.

“In the third the Naps gave young Mr. Hearn a most through trying out,” wrote Henry P. Edwards in the Cleveland Plain Dealer. Bris Lord hit the ball to him again leading off the inning. Hearne handled it well. Turner reached on a hit between pitcher Collins and third baseman Harry Lord. Hearne rushed in and got to it but it was too slowly hit for him to make a play. Then Lajoie hit yet another grounder to Hearne but “the ball bounded so slowly that Larry was perched on the initial sack when Hearn’s throw arrived, Turner taking third.” Catcher Harry Bemis then “poked one to the same spot that was too hot for Hearn to handle and Turner scored.” The ball scooted between his legs. As if that wasn’t enough, the fifth batter in succession — first baseman George Stovall — “followed with another to the same precinct but this time Hearn was on the job and nailed his man at first. He might have pulled off a double play by throwing to second, but having the distance to first pretty well gauged by that time he opined it were better to play safe. His slip did not hurt, however, as Lajoie and Bemis were left when [left fielder Art] Krueger” — actually Kruger — “bounded one to [Sox third baseman Larry] Gardner.”2

Hearne came to bat with two men on and one out in the top of the second, but struck out and so did Jake Stahl.

The Red Sox scored a run in the top of the fourth. Then Stahl drew a two-out base on balls and Donovan decided to have Bill Carrigan pinch hit for Hearne. Carrigan hit the ball hard, but was out on a leaping catch by Naps shortstop Turner.

Despite having a bad leg, Heinie Wagner played the rest of the game starting in the fourth “and it closed a big hole,” remarked the Globe.3 Two games, two at-bats, one of them a strikeout. The historical record doesn’t assess Hearne an error on any of the plays, though the July 11 newspaper box scores all do.

“Hearn and Lord Slip Up, and Cleveland Lands a 3-1 Victory” was the subhead in the Boston Journal. The Journal’s sportswriter Herman Nickerson wrote, “It is not my intention to criticize Patsy Donovan, who, in my judgment, did the wise thing in playing Hearn at short. This young Californian made a fine showing in yesterday’s game in Chicago and has all the earmarks or a clever infielder. … Hearn was in front of every play he had and slipped up on only one, the fatal one, as it proved, though later in the game he had a chance for a double play and threw to first instead of second.”4 Not a ball was hit to Wagner for the rest of the game.

Despite the “slip,” the official records do not assess Hearne with an error. He’s in the books with a 1.000 fielding percentage, handling seven chances with three putouts and four assists.

Who was this young Californian? He was born Edmund Hearne on September 17, 1887, in Ventura, California. His father, Nicholas Hearne, was a grocer in the year Edmund turned 13, a native Californian born to an Irish father and a California-born mother. Edmund’s mother, Mary, had been born in the Golden State, too, and both her parents were native Californians. Edmund was the second of four children in the family.

By 1910 Nicholas Hearne had become an agent for real estate and insurance. In the 1910 census it was reported that Mary, though Californian, was of “Mexican-Spanish” ancestry. Edmund himself was working as a clerk in a grocery store; later in the year, as we know, he was brought east to play for the Red Sox.

Quite how he progressed to the big-league opportunity is hard to trace. His minor-league experience was minimal. He seems to have played semipro ball, and is certainly the “Herne” playing second base for Ogden, Utah in 1906.5 He is probably also the same Hearne who played in the Northwestern League in 1907 for three teams — the Butte Miners, Vancouver Canucks, and Seattle Cubs.6 He played most of the games for Seattle, where he was known as Reddy or Red Top. He’s listed with a combined league record of 39 games and a .151 batting average. In September he was seen playing for Kelso in the Tri-City League.7 He was said to have received an offer in early 1908 to play for the Cripple Creek team, but he was under contract to Seattle so was unable to accept.8

Researcher Chris Woodman reports that Hearne appears to have played semipro ball in Richmond, California during May and June 1908 for the Point Richmond and I. M. Perrins teams.9 In August, he was in North Bend, Oregon playing for a semipro team. An article in the Coos Bay Times, in Woodman’s words, “glowed about his fielding” and foresaw him making the major leagues in a few years.10 Still later in 1908, he was playing professionally again, for the California State League’s Oakland Commuters.11

In 1908 Hearne played for Dan Dugdale’s Seattle team but broke his leg, and it doesn’t seem he played much at all.12 He elected not to play for most of 1909, at the request of his mother. On February 12 his 19-year-old brother, Thomas, had died at Bard Hospital in Ventura. The Los Angeles Times reported, “Edmund Hearne, noted in professional baseball circles as a second baseman, has, at the solicitation of his mother, given up baseball and will devote his time to merchandising, taking the position held by his brother, Thomas Hearne, who died a few days ago of appendicitis.”13 Ed is listed as appearing in two games, with one hitless at-bat, for the 1909 Vernon Tigers. And he’d been signed by Vernon for 1910, but manager Hap Hogan planned to farm him out to Bakersfield.14 He’s seen playing for the Bakersfield Drillers in late May.15

How Hearne eventually wound up in the major leagues for the Red Sox remains a bit of a mystery, but Chris Woodman has an explanation. With Heinie Wagner playing injured, the Red Sox were in dire need of a shortstop. Sox pitcher Charley Hall hailed from Hearne’s home town of Ventura. An article in the May 24, 1910 Bakersfield Californian mentioned that Hall had telegraphed Hearne about joining the Red Sox, and Hearne left for Boston.

Donovan kept Hearne around for a month, but never used him again. “Hearn Sold to Waterbury” — such read a subhead in the July 15 issue of the Boston Journal. He’d been sold to Mike Finn’s club in the Connecticut League.16 He played shortstop in a number of games for Waterbury, batting.250 in 23 games and 76 at-bats. Also on the team was an Ahearn. As far as we can tell, that was Ed Hearne’s last engagement playing pro ball.

The year 1910 ended nicely for him. The November 5 Sporting Life told readers that Hearne was married at Ventura on October 23 “to Miss [Marie] Willis, of that city. The wedding was so quiet that the couple got away on their wedding trip before their friends became aware of the event.”17 Perhaps Miss Willis urged him to give up baseball. Even though the Red Sox spent most of 1911 spring training in California, it doesn’t appear that Hearne received even so much as an invitation to work out with the team.18

The Hearnes settled in Oxnard, and Ed played on city semipro teams from 1910-15, with his principal employment being as a clerk in the Hotel Oxnard until July 1913 when he left that work to join in partnership with a Jacob Seckinger and run the Palace Pool Hall in Oxnard.19

It’s also not clear if or how that marriage ended; come June 1917, Hearne was single and living by himself in the Cadillac Hotel in San Francisco. He was working as the assistant manager of a cafeteria. Shortly afterward, he was called and he served in the US Army from August 4, 1917, until January 24, 1919, leaving the army as a sergeant.

The very next year, 1920, Hearne was the proprietor of a cafeteria. We were unable to find him in the 1930 census, but a 1938 voter registration document shows him as a deputy sheriff living with his (second?) wife, Ada, and the 1940 census shows him and Ada — and their 2-year-old daughter, Patricia — living in San Buenaventura, California, with Ed serving as a bailiff in the superior court. Ada was a Texan by birth.

Edmund Hearne died on September 8, 1952, of an acute myocardial infarction. He had made arrangements in advance, and even purchased a headstone. His last position was working as a guard at the Veterans Administration complex in Los Angeles. As a veteran, he was buried in Los Angeles National Cemetery.

In addition to the sources noted in this biography, the author also accessed Hearne’s player file from the National Baseball Hall of Fame, the Encyclopedia of Minor League Baseball, Bill Lee’s The Baseball Necrology, Retrosheet.org, and Baseball-Reference.com. Thanks to Chris Woodman for additional information which significantly improved this biography.

1 The same story appeared in the July 10, 1910, Cleveland Plain-Dealer, New Orleans Times-Picayune, Washington Post, and elsewhere. The Post ran more of it than the other newspapers. The spellings of Hearne’s last name are presented here as printed in the various newspapers.

9 Multiple box scores in multiple newspapers including the May 12, 1908 Oakland Tribune.

17 The January 7, 1911, issue provides the exact date and first name of Hearne’s bride.