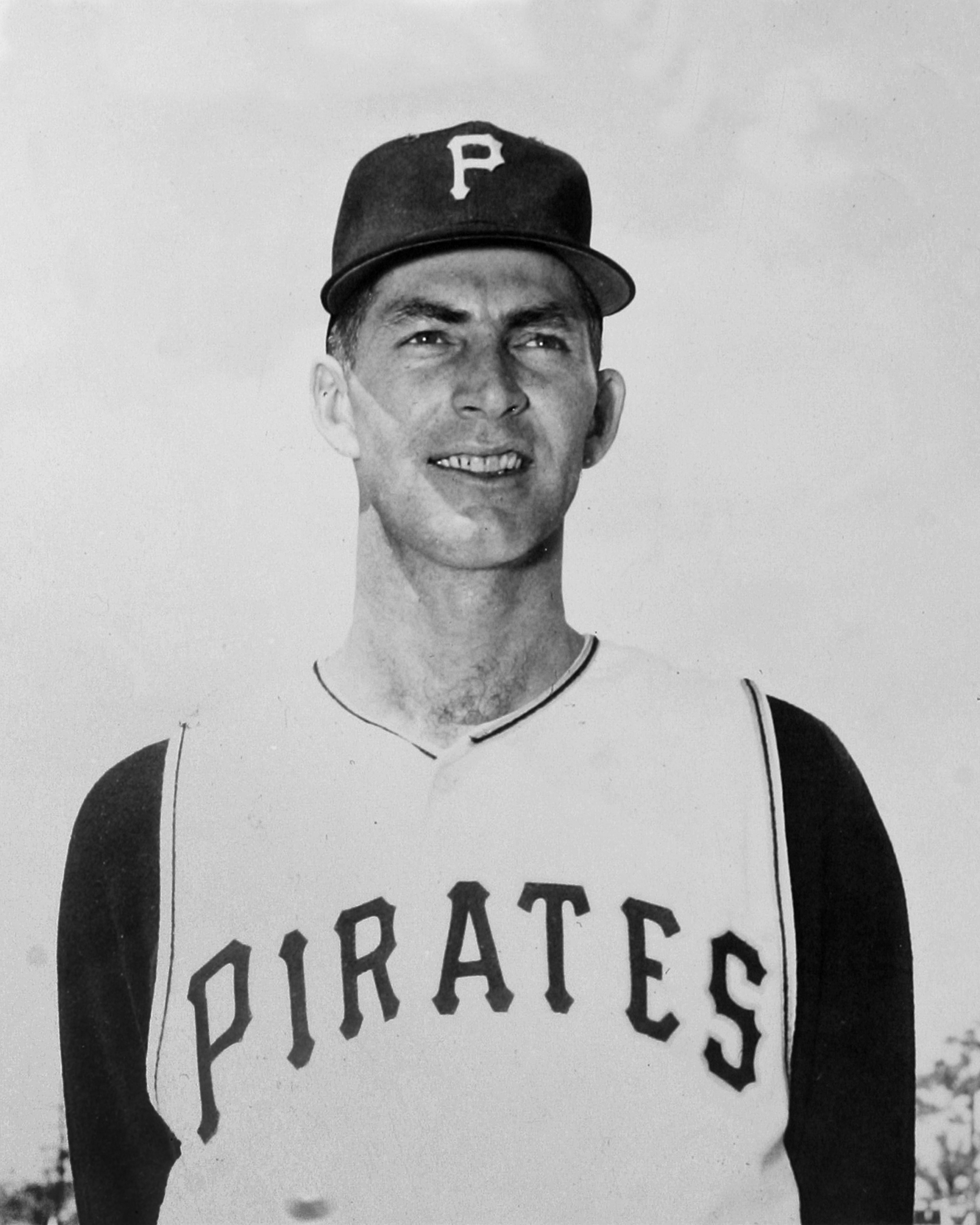 At 3:36 P.M. on October 13, 1960, Fred Green watched a ball hit by Bill Mazeroski sail over the left-field wall as Forbes Field erupted into bedlam. The improbable Pirates pulled off their stunning upset over the highly favored New York Yankees!

Years later, Fred’s widow, Mona, shared her husband’s feeling on the experience: “Fred’s biggest thrill was playing in a World Series, although he didn’t pitch well. But the fact that the club won the Series delighted him very much!”1

Fred Allen Green was born to David and Edna Green in Titusville, New Jersey, on September 14, 1933. Fred had one sibling, his younger brother Robert. David Green was a carpenter and Edna a homemaker. Titusville, a tiny hamlet, is a few miles north of where George Washington and his Continental soldiers crossed the Delaware River on Christmas night of 1776 and surprised the Hessian garrison at Trenton.

The Greens’ son grew to be 6-feet-4 and 190 pounds. His athletic agility allowed him to become a star in baseball, basketball, and soccer at Titusville High School. His prowess as a left-handed pitcher brought him the most attention, and the Pirates signed him after he graduated from high school in 1952. His signing was a part of Branch Rickey’s youth movement, a group jocularly known as Rickey’s Dinks.

Green began with the Brunswick Pirates of the Class D Georgia/Florida League. He finished with a 20-12 record, a 2.54 earned-run average, and a league-leading 265 strikeouts, and was selected to the league All-Star team. For the next four seasons he moved up on the minor-league ladder, to Waco, Williamsport, New Orleans, and finally the Hollywood Stars of the Pacific Coast League in 1956. There, pitching mostly in relief, Green posted a 5-4 record, then was drafted. He spent his two-year Army stint in the Special Services, which basically meant playing baseball.

Discharged in 1958, Green returned to pitch for the Salt Lake City Bees, who had replaced the Stars as the Pirates’ farm in the Pacific Coast League. Manager Larry Shepard welcomed him with open arms; the Bees had only one other lefty. Green compiled a 10-8 record. After the season the Pirates purchased his contract. They invited him to spring training in 1959 to compete with 18 other pitchers for a spot on the roster. Green impressed the Pittsburgh brain trust and went north with the team to start the season.

He made his major-league debut against Cincinnati on April 15, relieving Bennie Daniels in the seventh inning with the Pirates losing 8-5. He walked Jerry Lynch, the first batter he faced, then gave up a homer to Ed Bailey. On the 27th he pitched again, giving up two runs to the Los Angeles Dodgers. It became obvious that he needed more seasoning, and the Pirates sent him to Triple-A Columbus. While his future in the major leagues seemed to be as a left-hander out of the bullpen, he was used as a spot starter at Columbus, and on May 30, soon after he was sent down, Green hurled a two-hit shutout against Richmond.

While he was not spectacular at Columbus, going 3-5 with a 3.46 ERA, neither were the Pirates. Between July 21 and August 2 they lost 12 of 13 games, and Green was recalled.

On August 15 Green proved his worth in the bullpen during a game against the Milwaukee Braves, who were rallying against Elroy Face. It was one of the rare occasions when Face was unable to stomp out a threat. Manager Danny Murtaugh brought in Green to face Frank Torre with the bases loaded. Torre reached on an error after a force play and two runs scored, cutting the Pirates’ lead to 10-8. Bobby Avila doubled, but Green struck out Eddie Matthews with the tying run on base, then retired the side in the top of the ninth.

Two days later Green won his first major-league game. He entered a one-run game against the Cubs in the sixth inning and allowed the tying run to score, but got the victory when the Pirates scored a run in the seventh. Green finished 1959 with a 1-2 record and 3.13 ERA in 17 appearances. He made his only major-league start on September 11, against the second-place Dodgers with the Pirates struggling to stay in the pennant race. Green pitched well until Wally Moon hit a three run homer in the fifth, and lost the game, 4-0. After the season Green and a group of other Pirates prospects played for Aguilas Cibaenas in the Dominican Winter League.

In 1960 Green joined Face and others in the Pittsburgh bullpen. On April 21 he came in against the Philadelphia Phillies in a third inning, pitched out of a jam and went 3? innings for his first win of the season. In a lefty-righty combination, Green was the first left-handed reliever Murtaugh called upon. On July 27 The Sporting News proclaimed Face and Green as the best bullpen combination in the National League. Face finished at 10-8 with 24 saves and Green was 8-4 with three saves as the Pirates won the pennant.

In a Series of contrasts, the victorious Pirates’ four victories were by scores of 6-4, 3-2, and 5-2, while the Yankees crushed the Bucs, 16-3, 10-0, and 12-0. Green pitched in all three of the Pirates’ losses, and was hit hard. In four innings he yielded ten runs. He gave up two home runs to Mickey Mantle, including a mammoth shot over Forbes Field’s right-center-field wall in Game Two. Although he appeared to be throwing batting practice for Yankees hitters during the World Series, Green was named to The Sporting News’ 1960 All-Star rookie team.

Green developed a palmball after the season and experimented with changing speeds on his pitches. The Pirates had him penciled in for their 1961 bullpen. He ended splitting his time between Pittsburgh and Columbus. His 7-3 record helped Columbus win the International League pennant. With Pittsburgh he was 0-0 in 13 games and his ERA ballooned to 4.79. He never won another major-league game. The Pirates skidded to sixth place. Just before the end of the season Green was sold on waivers to the expansion Washington Senators.

Green became reacquainted with the Yankees early in the 1962 season. On April 28 he entered a game at D.C. Stadium in the sixth inning with the Yankees leading, 5-1. He gave up an unearned run. Then in the seventh, he gave up home runs to Hector Lopez, Clete Boyer, and Roger Maris. A few days later Green was sent to Jacksonville. He split the rest of the season between Jacksonville and Syracuse, combining for a 4-7 won-lost record and a 5.13 ERA. In May of 1963 the Senators released Green. He signed with the Pirates, who sent him to Columbus to finish the season. He made the Pirates’ roster in 1964 but was used sparingly, pitching 7? innings in eight games with a 1.23 ERA. On June 14 he made his last major-league appearance, against the Chicago Cubs. Green entered the game in the seventh game and pitched to two future Hall of Famers, Billy Williams and Ron Santo, retiring them both. Shortly afterward Pittsburgh sent Green back to Columbus.

Green finished the season with Columbus and returned in 1965, hoping to work his way back to Pittsburgh. He appeared in 37 games and was 1-4 with a 4.66 ERA. After the season he retired from professional baseball, at the age of 32.

Green went to work for Leaseway Transportation Company and eventually became a manager for the firm. He and Mona had two sons, Gary and Gregg. Gary played shortstop for the San Diego Padres, Texas Rangers, and Cincinnati Reds, and managed Pirates and Tigers farms teams for 11 season. Fred loved being around baseball and occasionally pitched batting practice for the Pirates.

Fred Green died of a heart attack in Titusville on December 22, 1996. He was 62 years old. He was buried in the Harbourton Cemetery in Lambertville, New Jersey.

Nellie King, a former teammate and Pirates broadcaster, put Green’s baseball career in perspective: “He was a journeyman … a good, friendly guy who had to work like hell to get where he was, but there are great players who never played on a championship team. He did!”2

In addition to the sources cited, the author also consulted: