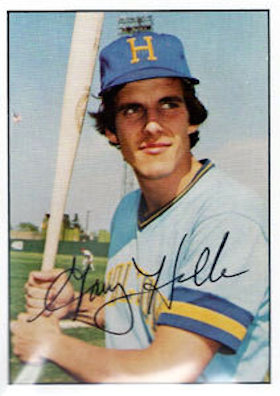 In the 1970s Gary Holle was a dual-sport phenom (baseball and basketball) from upstate New York who had a six-year minor-league baseball career and a two-week stay with the Texas Rangers in 1979.

Born in Watervliet, New York, on August 11, 1954, to Charles and Jean Holle, Gary carved out a successful business career after his brief adventure in baseball. As of 2015 he was the director of sales for the SMG Group at the Times Union Center sports facility in Albany, New York. He and his wife, Paula, lived in Loudonville, New York. Their two sons, Gary Jr. and Greg, followed their father in being successful athletes.1

At 6-feet-6 and 210 pounds, Gary Holle was an intimidating and dominating presence on both the hardwood and on the diamond. He achieved his earliest athletic prominence in basketball. As a gangly freshman who barely made his high-school junior varsity team at Catholic Central High School in Troy, New York, Holle through hard work, determination, and grit became an all-star center whose scholastic career culminated with regional honors and basketball scholarships to Xavier (Cincinnati) and Siena College (Loudonville, New York). In 2015 he still held Catholic High’s single-game scoring record of 53 points (in an era when there was no three-point goal).

In 1975 for (then) Division II Siena College, Holle was named third-team All-American in basketball while averaging 20.6 points and 9.5 rebounds per game. In his “second” sport, Holle was even more impressive, becoming a first-team All-American in baseball. An awesome power hitter, he led all Division II and III players in batting average (.577) and had an 0.55 per game home run average.2

Labeled a “can’t-miss” prospect, Holle was drafted in the 13th round of the 1976 amateur draft by the Milwaukee Brewers and signed with them, forgoing his senior year of eligibility at Siena. Sportscasters were effusive in their praise of the young first baseman’s potential: “Pro scouts [were] drooling and opposing pitchers were cringing” was the general consensus. Siena College baseball coach Tony Rossi believed his power hitting star would be drafted by the fifth round: “Gary has excellent bat quickness and is very, very strong for a power hitter. … He’s very coachable with a wealth of natural ability.”3

In spite of being selected lower in the draft than expected, Holle nonetheless was eager to begin his professional baseball career. When he was offered a roster spot with the Brewers Instructional League Camp in Tempe, Arizona, he jumped at the chance: “I realized the camp was a once in a lifetime opportunity and baseball could be my career. … Sports have been a big part of my life, I’d like to make a career of [baseball].4

Brewers general manager Jim Baumer sang Holle’s praises: “[He is] the top first baseman prospect in our entire organization.”5 However, Holle’s seemingly limitless potential and a highly productive six-year minor-league career were not enough to get him more than the proverbial “cup of coffee” experience in the major leagues.

After the season Holle returned to Siena to earn his degree in sociology, then played in 1977 for the Holyoke (Massachusetts) Millers of the Eastern League, batting .253 with 30 home runs, 25 doubles, 75 runs batted in, and 50 walks.

Holle split the 1978 season between the Millers and the Spokane Indians of the Triple-A Pacific Coast League. He hit a combined .277 with 18 home runs and 84 runs batted in. On December 15, 1978, the Brewers traded him to the Texas Rangers with pitcher Ed Farmer for pitcher Reggie Cleveland.

Holle reached the major leagues in 1979, called up by the Rangers on June 2, after batting .341 for the PCL’s Tucson Toros. His improved hitting was due in part to a decision he made early in the year: “At Holyoke, [I had] an all-or-nothing hitting style. I decided to become more reserved at the plate. I cut back on my swing and my batting average soared.”7

On June 2, 1979, at Arlington Stadium, Holle played in his first major-league game. He pinch-hit for outfielder Johnny Grubb and grounded out against Baltimore closer Dan Stanhouse in a 5-4 Orioles victory. When Baltimore, Boston, and Milwaukee threw five consecutive right-handed starters at Texas, the right-hand hitting (and left-handed throwing) rookie rode the bench.

Holle got his first (and only) major-league start on June 8 in Baltimore. Southpaw Mike Flanagan, who went on to win the 1979 American League Cy Young Award with a 23-9 record, pitched a four-hitter for the victory while the Rangers’ Doyle Alexander, who also pitched a four-hitter, took the 3-0 loss. Holle fielded flawlessly at first base (11 putouts) while going 0-for-2 with a walk. Only a diving stop by Orioles second baseman Rich Dauer on a ball hit up the middle prevented the rookie from getting his first major-league hit.8

The next day Holle got his first (and only) major-league hit. Pinch-hitting for Rangers shortstop Larvell Blanks, the rookie stroked a double over the head of outfielder Ken Singleton off Stanhouse.

Back home at Arlington Stadium, Holle pinch-hit on June 13 and 14 against the Brewers, each time batting for shortstop Nelson Norman and making an out. On the 13th Holle faced pitcher Reggie Cleveland, for whom he had been traded, and made the last out in a 5-4 loss. On the 14th, in his last appearance in a major-league uniform, Holle grounded out against Brewers hurler Bill Travers.

The next day Holle and Ed Farmer were sent to the Chicago White Sox for third baseman Eric Soderholm. With .300-hitting Lamar Johnson and slick-fielding Mike Squires manning first base, the White Sox had no opening on their roster and sent Holle to their American Association affiliate Iowa Oaks, where the young first baseman completed the 1979 season batting .273 in 39 games.

The 1980 season was a nomadic one for Holle. He opened the season with Iowa (.250), was sent to the Pacific Coast League Phoenix Giants (.381 in 60 games), and ended the season with the Charleston Charlies of the International League (.210 in 20 games). His composite year was more than respectable with a .316 batting average, 12 home runs, and 60 RBIs. Holle summed up the year as “a crazy one” in which “I never felt settled in with Iowa and Charleston.”9

The next season, 1981, was Holle’s swan song in Organized Baseball. The perennial top prospect spent the entire season with the White Sox’ PCL affiliate in Edmonton, where he batted .327 with 26 home runs and 88 RBIs. Such production clearly established that Holle had nothing left to prove in the minor leagues.

On October 30, 1981, Holle was traded for the third time in 34 months. He was sent with pitcher Dewey Robinson to the Philadelphia Phillies for minor leaguer Juan Castro. When Holle reported to the Phillies’ training camp in Clearwater, Florida, in 1982, he saw the handwriting on the wall, while competing for the first-base job with Pete Rose (who was to play all 162 games that year). The 1982 Philadelphia roster also had aging first baseman and pinch-hitter deluxe Willie Montanez and a versatile young infielder, Julio Franco. Faced with another demotion to Triple-A, Holle retired and returned home. His reason for his retirement was quite simple: “I had enough. I wanted to get on with things. [My baseball career] was all about making it to the major leagues, so I didn’t want to return to Triple-A. I was never cut or released.”10

When he returned to the Capital District in 1982, Holle had no plans to become involved with professional athletics: “I wanted to do normal stuff, to get away from the sports stuff.”11 However, within a few weeks, he was back in the sports industry: “A bunch of local businessmen wanted to start a local (Continental Basketball Association) team.” Planning to stay with the project for only a few months, Holle stayed with the team, the Albany Patroons, for a decade as general manager. The Patroons were a successful franchise that seemed to attract first-rate coaches. Albany won the CBA title in 1984 (under Phil Jackson) and in 1987 (under Bill Musselman). In 1990-91, under George Karl, the Patroons went 50-6 and were undefeated at home.

Holle became a known and desired commodity in the Capital District sports world, often working for two organizations concurrently: “I seemed to parlay one job into another one.” For example, he became director of Heritage Park, in Colonie, New York, which housed a Double-A baseball franchise. In the first year of his tenure, the club was an Oakland farm team; in the second year, the New York Yankees used the facility for their Colonie Yankees team, which featured such future major leaguers as Derek Jeter, Bernie Williams, Jorge Posada, and Dave Drabek.

In 1990 Holle was asked to help organize an arena football franchise that was being contemplated by some of the same business group that backed the Patroons. Holle was a central figure in the application process because he was overseeing the Patroons’ transition from the ramshackle Washington Avenue Armory to a new county-owned sports facility, Knickerbocker Arena, which subsequently was renamed the Pepsi Arena and then the Times Union Center. The complex also became the home of the Albany Firebirds of the Arena Football League, who won the Arena Bowl in 1999, the year before the team relocated in Indianapolis.

In 1990 Holle was named director of sales by the SMG group, the operator of the Times Union Center, and, along with other administrative duties, was still serving in that position as of 2015.

Holle spent only two weeks in the major leagues, but looks back on his baseball days as memorable ones: “It is about the many laughs you have and the great people you meet. There is such a wide variety of people from all places. They are thrown together because they can do one thing well – pitch, catch, hit. [This group] is in a completely different world, all pulling together for only one reason – to win. It’s a type of confinement with everyone feeling the same pressure. Then suddenly it all ends and you never see [your team members] again.”12 This sense of the sport of baseball as an intense, all-too-short experience, a flashing meteor across the sky that is soon out of sight, is a metaphor that can be aptly applied to Holle’s career in baseball.

All biographical and statistical facts were checked by Gary Holle in a telephone interview on June 2, 2015, and verified on at least two of the following databases: Baseball Almanac, Baseball Cube, Baseball Prospectus, Baseball Reference, Fangraphs, or The Sporting News.

1 Gary Holle, telephone interview, June 2, 2015 (hereafter cited as Holle interview). Elder son Gary Jr. followed directly in his father’s athletic footsteps: He was an All-City basketball player for Catholic Central High School and played Division I basketball for Siena College. Younger son Greg starred in baseball at Christian Brothers Academy in Albany and played three years of varsity baseball at Texas Christian University. In 2015 he was pitching for the Laredo Lemurs of the independent American Association. Greg was selected in the amateur draft in both 2007 (New York Yankees) and 2010 (Milwaukee Brewers, the same team that selected his father in the 1976 draft).

2 Holle’s.577 batting average in 1977 was the third highest ever for NCAA Division II baseball players. His statistics were other-worldly that year: .630 on-base percentage, 1.183 slugging percentage, and 1813 on base plus slugging statistic (OPS). He won the NCAA “Big Stick” award as the best hitter in all divisions. Troy (New York) Times Record, March 31, 1976.

11 Holle interview. There are moments when old teammates do get together. One such meeting happened on July 21, 2014, at Bruno Stadium in Troy, New York, home of the Tri-Cities ValleyCats of the New York-Penn League. Holle took part in a promotion, Capital Region Baseball Heritage Night. He met and exchanged war stories with ValleyCats manager Eddie Romero, who before having a 12-year career as a middle infielder in the major leagues was a teammate of his on the 1977 Holyoke team.