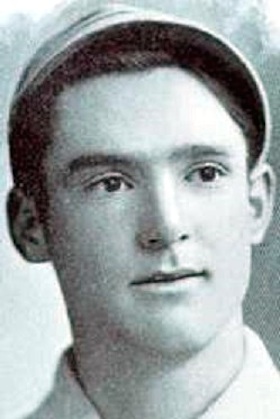 Born in St. Paul, Minnesota, of French parentage on March 10, 1873, Gene Demontreville took pity on typesetters by playing as “Demont” for most of his career and was the brother of marginal major leaguer Lee Demontreville. He became a cause célèbre in 1899 when the July 8 issue of The Sporting News revealed that Washington owner J. Earle Wagner had gloated to Cincinnati writer Harry Weldon that in 1897 Washington scorekeepers had inflated Demontreville’s average from .285 to .345 (since reduced to .341) to make him seem a more valuable commodity to Baltimore manager Ned Hanlon and admitted the club had done similar padding with Bill Joyce, which was why Joyce’s average had dropped so precipitously after he was traded to New York in 1896. When Hanlon later queried Wagner about Demontreville’s hitting decline, the Washington owner admitted the deception (or so he said) and Hanlon then did the same trick with Demontreville in 1898 so that Chicago would be willing to deal its far more talented but irremediably unhappy shortstop Bill Dahlen for him the following year.

Wagner recanted his story only a week after it first appeared in The Sporting News, claiming he’d made it up because Weldon needed a scoop, and H.F. Patterson, writing for the July 15, 1899, issue of The Sporting News, concurred, saying it would be impossible to hike a batting average by so large an amount by crediting errors as hits, and that any other method would be such an obvious fraud that it would be detected immediately. When Washington scorer Joseph Campbell vehemently denied there had been any skulduggery involving Demontreville’s batting averages, at least not to his knowledge, in the same issue of The Sporting News, the supposition was that Wagner had manufactured the tale to make it seem he had not been as badly outfoxed in the Demontreville deal with Baltimore in December 1897 as the press believed after it developed that the three-for-three trade brought Washington only one quality player, Jack Doyle, while Baltimore got three – Demontreville, Dan McGann, and pitcher Doc McJames. Whatever the truth, if Demontreville’s three seasons in question (1896-98) are deducted from his career totals, his batting average shrinks from .303 to .274.

Demontreville began his professional career at the age of 20 in 1894 and played in four different minor-league cities that season, including the Allentown, Pennsylvania, Eastern League club under Mike “King” Kelly. In addition, he participated in two games with the Pittsburgh National League club as an injury replacement for shortstop Jack Glasscock. In his Pirates debut on August 20, 1894, at Baltimore, he went 1-for-4 in a 7-5 win over the Orioles’ Duke Esper and Bill Hawke. Demontreville also went 1-for-4 in his second and final appearance with the Pirates before they released him after deciding his arm was inadequate for the shortstop position. In the February 12, 1900, edition of the Washington Post, DeMontreville himself was uniquely frank when he said: “I was never a howling success as a shortfielder, perhaps because I was never cut out to play that position.” Nevertheless, upon being notified of his release, he impudently vowed that he would soon be back in the majors, by which time Pirates manager Connie Mack would be in the minors. Mack’s reply was to laugh in his face, but such nearly came to pass when Washington drafted Demontreville from Toronto after the 1895 Eastern League season ended and Pittsburgh fired Mack the following year.

The son of a recently deceased dentist, after being drafted Demontreville immediately took up residence in Washington with his widowed mother, who didn’t want him to play ball for fear of injury but ultimately decided to let her son do as he wished with his life and came out to all of Washington’s home games when she was given a box seat by Wagner. In 1896, his official rookie year, he led Washington in batting average and total bases. Moved to second base the following year, Demontreville continued to lead the D.C. club in most batting departments but by midseason had begun to be chided for arrogance and selfish play. He grew increasingly unpopular with teammates and the public when the press began accusing him of playing for his release.

After being traded to Baltimore, Demontreville continued to hit for average, but his power numbers dropped and he was criticized by Hanlon for persistently “advancing a step or two” after fielding a ball before throwing it to first base. Baltimore still was able to unload him when the Chicago Natonals’ manager, Tom Burns, desperately wanted to get rid of “disorganizer” Dahlen. Demontreville lasted only four months in Chicago when he “mixed with the worst set in the team,” according to the Chicago Tribune, and showed up for a game with a head injury from being beaned by a popcorn bowl another bar patron threw at him. On August 2, 1899, he was returned to Baltimore for lightly regarded infielder George Magoon. The following day Demontreville was involved in a controversial nontrade when he and pitcher Jerry Nops were shipped to Brooklyn for sore-armed shortstop Hughie Jennings, who was nearing the end of the road as an impact player. The deal was canceled before any of the figures could report to their new clubs after the press in the other NL cities yowled that “Brooklyn was being strengthened by their Baltimore farm team.”

That winter, with the NL about to downsize to eight teams and Baltimore slated to be among the four franchises that would be lopped, one of the last acts perpetrated by the syndicate ownership that existed between the Orioles and the Superbas moved Demontreville to Brooklyn, where he was expected to hold down third base. But even though he lost the job to Lave Cross, he remained on the team because he had protected himself against the imminent downsizing by insisting on a contract that guaranteed he would stay with Brooklyn all of the 1900 season.

In August 1900 Demont married Anna Kelly, a Toronto woman he had met while playing there in 1895, and seemed ready to take himself less seriously and his profession more so. He let it be known that he intended to take Tom Daly’s second-base job with the Superbas in 1901, but instead he was sold to the NL Boston Beaneaters. In the first year of the new century he hit an even .300, the last time he would achieve that mark in the majors. During the offseason he injured his throwing arm sometime in February 1902 when he tried to get an early jump on spring training by working out in the cold Northern weather. After he dipped to .260 in 1902, Boston was happy to let DeMontreville jump to Washington of the American League. Back in the city where he had achieved his greatest glory, Demontreville opened the 1903 season at second base on April 22, batted seventh and went 1-for-3 in a 3-1 win over New York in the Gotham club’s maiden game as a member of the American League. He also participated in the Highlanders’ (soon to be re-nicknamed the Yankees) first home game, on April 30, but was replaced at second base on May 6 at Boston by Ducky Holmes, normally an outfielder, and the Senators then made do without a bona-fide second baseman until Barry McCormick joined the club. Demontreville’s release was not reported, however, until over a month after his last appearance with Washington. In its June 17 issue Sporting Life remarked: The release of Gene Demontreville caused no surprise, as he has been utterly useless to the Washingtons. [Manager Tom] Loftus has certainly been goldbricked into paying fat salaries to men who have failed to deliver the goods.”

In its February 27, 1904, issue The Sporting News bestowed its coveted cover photo on DeMontreville after he had been signed by the St. Louis Browns and also pledged in its brief bio on him that after recuperating at Mount Clemens, Michigan, he had been “fully restored to health and was expected to be one of the stars of the team.” But Demontreville lasted just four games with the Mound City club. Released after he played second base for the Browns on April 26, 1904, at Detroit and went 1-for-4 in a 6-5 win over the Tigers’ Jesse Stovall, by May 6 he was the captain and second baseman of the Atlanta Southern Association entry under the tutelage of longtime minor-league skipper Abner Powell. He then spent the next two seasons and part of a third with Toledo of the American Association before returning to the Southern Association, where he finished his pro career in 1910 with Charlie Frank’s New Orleans Pelicans. By that time Demontreville had made the South his permanent home and become involved in the Tri-State Fair Project in Tennessee. In 1935 he died of a heart attack on February 18 while running to investigate a minor fire on the Mid-South Fairgrounds in Memphis, where he had been the concessions manager for the past 25 years. He was buried in Glenwood Cemetery in Washington, D.C.

In assembling this biography I made extensive use of Sporting Life, The Sporting News, and the Washington Post for details of DeMontreville’s professional baseball career, 1894-1910. For information about his grave site I used the internet. DeMontreville’s major- and minor-league statistics came from baseball-reference.com