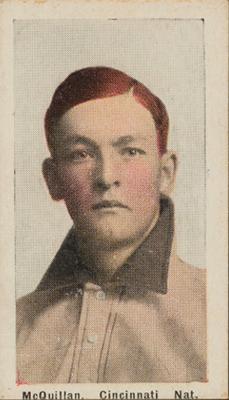 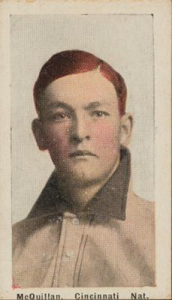 George McQuillan was the Doc Gooden of the Deadball Era. In 1908 he enjoyed one of the best rookie seasons in history, going 23-17 for the mediocre Phillies with a sparkling 1.53 ERA in nearly 360 innings of work (in 1985 the young Gooden posted an identical ERA). An unusually fast worker even in an era of briskly paced games, McQuillan pitched with “supreme self-confidence” according to Baseball Magazine, becoming known as the brightest young pitcher in the game. Within three years, however, his career came crashing down in a sordid web of alcoholism, sexual escapades, and financial troubles.

George Watt McQuillan’s parents, Mary (Smyth) and Robert McQuillan, were Irish immigrants living in Brooklyn when George was born on May 1, 1885. A few years later the family moved to Paterson, New Jersey, the first planned industrial city in the United States. After playing outfield for his high-school team, McQuillan got his start in professional baseball in 1904 with Paterson’s minor-league team in the Hudson River League. On January 5, 1905, he married 19-year-old Mary Bernadine, whom he had met at the Paterson ballpark. The couple had a son, George Jr., in 1906. After his marriage, McQuillan supplemented his baseball income by working as an electrician during winters for the Edison Electric Company in Paterson.

Abandoning the outfield for the pitcher’s mound, McQuillan put together impressive minor-league stints at Paterson, New Bedford, Jersey City, and Providence before joining the Phillies in 1907. He pitched well, posting a 4-0 record and 0.66 ERA in six games, earning a shot at Philadelphia’s starting rotation in 1908. By almost any measuring stick, McQuillan was the second-best pitcher in the National League that season, inferior only to Christy Mathewson. Baseball Magazine said he had “enough inherent ability to make him a worthy rival of Mathewson.” He also bore a striking physical and facial resemblance to the great Giant pitcher. At 6’0″ and 185 lbs., “Big Mac” was intimidating. As one writer put it, “he looms up on the landscape like the head boss of a gang of lumber jacks or a scene shifter in a stone quarry.” Thanks largely to McQuillan, who pitched in 48 games (15 more than any of his teammates), the Phillies led the league in team ERA at 2.10.

McQuillan spent the winter of 1908-09 pitching for Matanzas in the Cuban Winter League, facing African-American stars such as John Henry Lloyd, Pete Hill, Grant Johnson, and Bruce Petway. Mac started out 0-2, including a 4-2 loss to the legendary Cuban hurler José Méndez, who pitched for Almendares. The hapless Matanzas club, mired in last place with a 3-36 record, folded in mid-season. The free-spending McQuillan, who had been counting on a full season’s paycheck, was left penniless and stranded in Havana. He borrowed $25 from a friend for passage back to the United States, a debt the friend was still trying to collect three years later. Shortly after returning from Cuba, McQuillan came down with what the media called a case of jaundice, but which probably was a venereal disease contracted in Havana. He still managed to pitch almost 250 innings in 1909, posting a 13-16 record despite a 2.14 ERA.

By that time Mary McQuillan had filed for divorce and George had become an alcoholic. While never overtly mentioning his alcoholism, sportswriters constantly criticized his “refusal to take care of himself”; one writer said his “careless disregard of training rules” had made him “undependable,” while another said he “failed to keep in condition.” McQuillan’s unreliability limited him to 152 innings in 1910, and the frustrated Phillies decided to get rid of him even though he posted a league-leading 1.60 ERA. After the season the Phillies sent McQuillan to the Reds in a mammoth deal involving eight players, all of them major-league regulars.

Almost immediately after becoming property of the Reds, George McQuillan hit rock bottom. On November 24, 1910, he reported to a medical clinic in Hot Springs, Arkansas, the Reds’ spring training site. He was diagnosed with secondary syphilis, an advanced but not serious stage of the disease. “He must let alcohol alone and stick to his treatment and if he will do that he will come out all right,” wrote his doctor, W. O. Forbes, in a letter to Reds owner Garry Herrmann, who had reluctantly agreed to pick up the tab for the treatment. “He has made up his mind thoroughly to abstain from alcohol in all forms and this will be of great value to him the coming year. I will outline a course of treatment for him to follow during the summer which will in no way interfere with his work and, I feel sure, will keep him in A-1 condition. [We] will take good care of him and see that he behaves.”

In addition to paying for the syphilis treatment, Herrmann also paid for McQuillan’s wife, with whom the pitcher had reconciled, to join him in Hot Springs. To make amends, George bought $270 worth of jewelry on credit from a Hot Springs jeweler. The store balked at first, but after McQuillan got a respectable citizen—Senators catcher Gabby Street—to vouch for him, the store let him purchase the jewelry. Two years later the jeweler, after repeatedly failing to collect the debt from McQuillan, was forced to appeal to the National Commission for the funds to be drawn out of McQuillan’s paychecks.

Though Dr. Forbes had assured Herrmann that his pitcher would be as good as new by the start of spring training, McQuillan in 1911 bore no resemblance to the promising pitcher of a few years before. After watching him post a 2-6 record and 4.68 ERA in half a season, the Reds, according to one report, “jumped at the chance to let him slide to the minors when the opportunity presented itself.” The Reds felt that “McQuillan’s persistent refusal to take care of himself and to lead the simple life ruined a most promising career,” and sold his contract to Columbus of the American Association. The move seemed to wake up McQuillan, and he became determined to make it back to the majors. “I won’t be there [in Columbus] long, let me tell you,” he told Baseball Magazine. “They can’t keep me down in the sticks.” That statement is ironic in hindsight, for McQuillan spent the rest of his life in the Ohio capital—it remained his permanent home until his death in 1940.

In the three seasons he pitched for the Columbus Senators, McQuillan compiled a 34-30 record with a 2.34 ERA. In 1913 he was hit on the head by a line drive, an injury that at first was believed to be career-threatening. He recovered quickly, however, and had a 12-4 record in July 1913 when he returned to the majors with the Pittsburgh Pirates. McQuillan had three middling seasons with Pittsburgh before being sold back to the Phillies for the waiver price in mid-1915. He pitched relatively well but Philadelphia let him go in 1916. After a brief stint with Cleveland in 1918, McQuillan’s major-league career was over. He remained in the minors until 1924, pitching for Kansas City, Peoria, Nashville, New Orleans, Rock Island, and Columbus, the latter two of which he also managed. Soon after his retirement he found employment as manager of a furniture warehouse in Columbus, a job he held for the rest of his life.