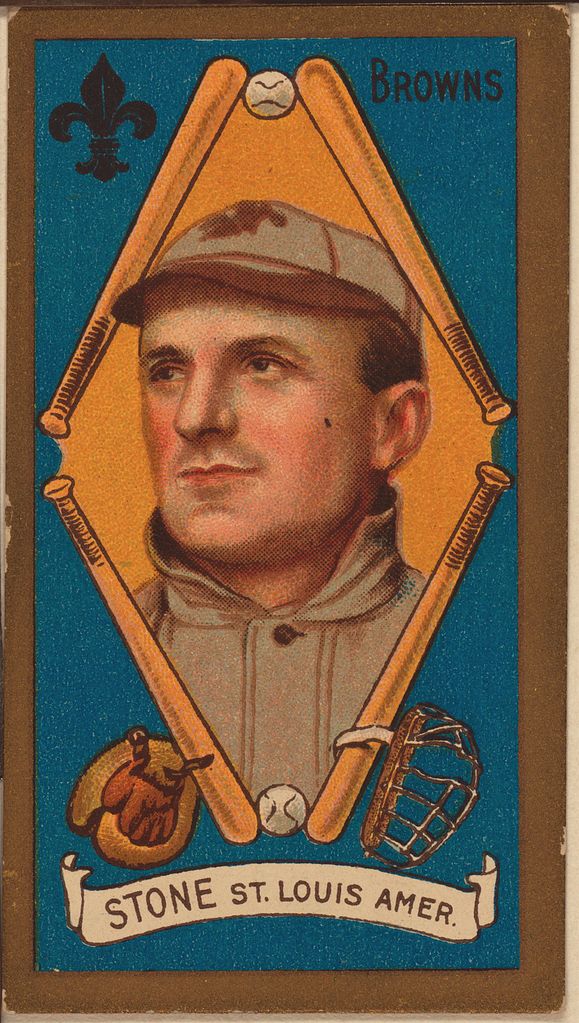 From 1901 through 1928, a future member of the Baseball Hall of Fame won the American League batting title in every season but one. The exception was in 1906, when outfielder George Stone of the St. Louis Browns hit .358 and beat out four-time batting champion Napoleon Lajoie for the AL batting crown. Stone’s great 1906 season is often forgotten, likely because his team finished in the second division, but in that year, Stone led the league in batting average, hits, total bases, and slugging percentage while finishing second in triples, third in RBI, and seventh in home runs. In spite of his batting success, Stone was self-effacing and reticent, and he acquired the nickname “Silent George” because of his understated disposition. According to a 1906 article, Stone “never talks loud and is one of the most inconspicuous men on the team outside of the fact that he is a man way above the average in physical development and has a head and face that indicate a man of business or one following a profession rather than a ball player. Stone’s taste runs to reading and his hobby is violin playing. In fact, he would rather be a great violinist with a limited income than he would a great ballplayer with a handsome salary.”

George Robert Stone was born on September 3, 1877 in Lost Nation, Iowa, to George and Hannah Stone. As a 16-year old, while working as a clerk in Coleridge, Nebraska, Stone got five hits in a local game along with three home runs. That performance led Stone to take baseball more seriously, and in 1902, he played with Peoria and Omaha, both in the Western League, and led the circuit with 198 hits. He soon was purchased by the Boston Americans, for whom he debuted on April 20, 1903. Stone’s time with Boston was short-lived, however, as he made just two pinch hitting appearances, striking out both times, before getting farmed out to the Milwaukee Brewers of the American Association, a team owned and managed by Hugh Duffy.

Remaining with the Brewers for the 1904 season, Stone enjoyed one of the best seasons in minor league history–his .406 batting average remained the league record until the circuit folded in 1997, and he also belted out a league-best 254 hits that year. “He is so highly regarded in Milwaukee that the press there claims he is the premier batter of the world,” the Washington Post reported. On August 9, 1904, Milwaukee sent Stone to the Washington Senators in a three-way deal, in exchange for a sum “as large as was ever paid for a minor league player.” But when the Philadelphia Athletics reneged on their end of the deal, refusing to send Ollie Pickering to Milwaukee, the deal fell through. Later in the 1904 season, Boston re-purchased Stone from Milwaukee, but he refused to report. That December, the Americans promptly shipped Stone to the St. Louis Browns for Jesse Burkett and cash.

In his 1905 rookie season, Stone made an immediate impact, leading the American League in at-bats, hits, and total bases. “He is a clever bunter as well as a clean hitter and his speed allows him to beat out an infield fumble,” said one contemporary writer. “He covers a great deal of territory and is a reliable fielder.”

Stone’s batting style was the subject of considerable fanfare. “When [Stone] first joined the Browns he was let go by Boston because Jimmy Collins did not like his style and considered him a doubtful batter owing to it,” The Sporting News remarked in 1906. “Stone crouched down over the plate, with his bat tight against his shoulder, took two steps and soaked the ball for all he was worth…His explanation of the advantages of the crouch is that it gets the eyes in a better position to follow the ball, as they are almost on a direct line with any delivery that comes over the plate. Secondly, the crouch sets the muscles so that a quick chop can be taken at the ball instead of the longer swing employed by most players. As a matter of fact, Stone can and does hit the ball with terrific force, when it looks as though he is going to let it pass without attempting to hit it, so close is the leather to him before he starts his stroke.”

The 5’9″, 175 lb. left-handed throwing and batting outfielder enjoyed his best season in 1906. At age 28, Stone set career highs in hits, triples, and stolen bases, in addition to winning the American League batting title. At the end of the season, though, Stone commented to the Sporting Life that he thought his major league career might be fleeting: “I realize that each year I continue in base ball sets me just that much further back in a business career. I am still a young man and believe it should be the ambition of every young man to get in business for himself…No, in a few years, you will see me hustling for myself in my Nebraska home, trying to work up a business that by and by will work for me.”

After his great initial success, Stone held out for $5,000 to start the 1907 campaign. In order to make sure that team owner Robert Hedges met his demands, Stone did not report to the team until right before the start of the season. The holdout, as one publication put it, “seems to have been the turning point of his career.” On one level, “the papers aired the case and naturally by some Stone was censured for what was termed unreasonable demands.” Moreover, “when he was finally granted the amount he asked, the fans figured that a player getting such big money should never fail to deliver the goods. Any time Stone failed, and unfortunately for him he had a rather tough year in 1908, he was roasted to a turn by the fans. Stone began to show signs of slowing up that year.”

Stone’s statistics fell off in both 1907 and 1908, though he was still an outstanding hitter. One account indicates that he contracted malaria in 1908, and Stone’s production plummeted in 1909 when he suffered an injury to his ankle. That injury cost Stone his speed, which had enabled him to beat out many infield hits. He also had problems with his arm, and “any time a ball was hit into his territory the opposing base runners advanced almost at will. The worry over all these things caused Stone’s batting to suffer and as a result the sensation of the American League of 1906 was a near joke in 1910.” Stone never hit higher than .300 after 1907, and his average fell to .256 in 1910, his last season in the major leagues. Stone returned to the Milwaukee Brewers in 1911, batting .282, but injuries led him to retire from professional baseball just 12 games into the 1912 campaign. He wrote to manager Duffy “that he has retired from the game for good and will spend all of his future time attending to his business in Nebraska.”

Stone soon entered the banking industry in Coleridge, Nebraska, and retirement afforded him more time to play the violin. He also owned a Western League franchise in Lincoln, Nebraska in 1916. In 1940, he and his wife Pearl (Moore) moved to Clinton, Iowa, near his birthplace.

George Stone died of a heart attack in Clinton at age 67 on January 3, 1945. He was survived by his wife and son, Dr. Vean M. Stone. He is buried at Coleridge Cemetery in Coleridge, Nebraska.

“Crouches At Bat: Still Stone is Star of All Stickers,” November 3, 1906, Clipping from George Stone’s player file at the Baseball Hall of Fame Library.

“Stone’s Belief Is That a Player Should Retire While Still Young,” Sporting Life, October 6, 1906. Clipping from George Stone’s player file at the Baseball Hall of Fame Library.

“Stone Loves the Game: Anxious to Sign Contract, Hedges tells Him to Wait,” Clipping from George Stone’s player file at the Baseball Hall of Fame Library.