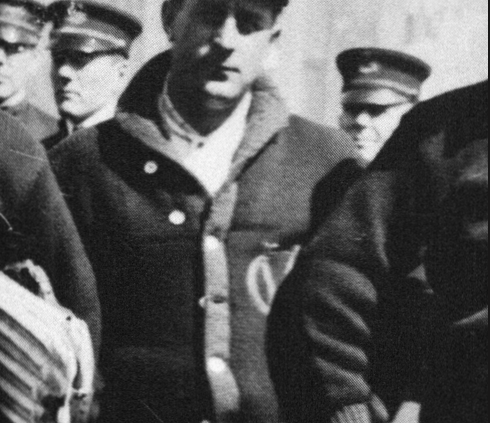 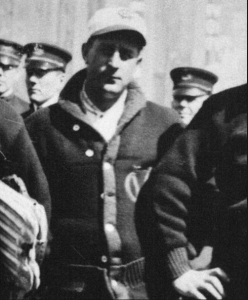 Grover Cleveland Gilmore was born in Chicago on November 1, 1888. He was the son of William Gilmore, born in Chicago, a railroad engineer, and Catherine Nantz, born in New York City, the daughter of German immigrants.

Grover Gilmore was a man with legends surrounding his life. Check out his few lines in Total Baseball and the Baseball Encyclopedia — you may pass by his name if you don’t look carefully, because there he is called Ernie Gilmore. When searching the newspaper articles about his career hardly ever is the name Ernie attached to him. He was always called Grover, and once the nickname Gilly was tried without sticking. The issue about his name brings up an amusing anecdote. He came into this world named Grover Cleveland Gilmore, certainly fitting since he was born during Grover Cleveland’s first term as the 22nd president. Although the name was not problematic for another ballplayer with the surname Alexander, little Grover Cleveland Gilmore, once he was able to weigh in on the decision his parents had made, protested the name he thought burdensome, requested that Cleveland be dropped and Ernest be added instead. And yet, around baseball he was always called Grover until the day he died.

Growing up in Chicago gave Grover unlimited opportunities to end up with a career playing baseball. One advantage early in life found him living next door to Jack Hendricks, a player with the New York Giants, Chicago Cubs, and Washington Nationals as well as a longtime major- and minor-league manager. His acquaintance with Hendricks would prove in the future to help advance his career.

From a very early age, Grover loved baseball, and the game was all around him, but at first, he was not allowed a place on a team, as he was not considered good enough. Instead he was given peripheral jobs like waterboy and bided his time carrying equipment. At that time, Jack Hendricks was managing a Chicago semipro team called the West Ends; he saw the fire in Grover’s soul, and gave him his first opportunity to swing a bat instead of carrying them for others. As his teenage years moved along, Grover developed into a better ballplayer and he broke into a few local corner-lot clubs. With hard work and attention paid to the baseball education offered to him, in 1910 he signed with the West Ends for $10 a Sunday and $3 a Saturday. Hugh Duffy, then manager of the Chicago White Sox, noticed him and in 1911 Duffy gave him a chance to show what he could do. But jumping from the West End field to the big league was a leap Grover was not quite ready for. He traveled to spring training that year with Chicago, but what talent he was able to show did not win him a place on the team roster. Remembered more for a joke he played on Ping Bodie than for his batting and fielding prowess, Grover did not leave empty-handed — he was sent on to Denver, where, it was hoped, he’d receive more professional training.1

And there in Denver, his old neighbor, friend, and mentor Jack Hendricks was waiting for him. Hendricks had moved on from the Chicago semipro scene and was now the manager of the Denver Grizzlies. Like many minor-league players before and after him, Grover Gilmore got a chance to see more of America than he might have otherwise. From the Denver Grizzlies in 1911, he spent part of 1912 with the Buffalo Bisons and the San Francisco Seals, where his next moment of note on the baseball pages came at the expense of a watch fob on the same day that he lost his job in San Francisco and was ordered transferred back to the Buffalo Bisons of the International League. Gilmore’s prized possession was a diamond-centered watch with a fob given to him by President William Howard Taft and bearing a facsimile of Taft’s signature. The loss of that cherished object affected Gilmore more than the thought of reporting back to Buffalo. He determined that a pickpocket had robbed him while he traveled on a ferryboat in San Francisco harbor. The fob had been given to him at the end of the 1911 season at Denver after the team won the Western League pennant. The sad tale apparently softened the hardened heart of the thief, as a package containing the stolen fob was returned to his most recent address while Gilmore was preparing to travel on to Buffalo. Lucky that the fob was returned so promptly as it might have had a difficult time catching up with him if it had been much delayed, as Gimore was about to move on to Buffalo, plans changed. President McGill of the Denver club heard about Gilmore’s impending return to Buffalo and got busy at once, purchasing his contract out from under Buffalo as he needed a reliable outfielder to replace the injured Lester Channell. Gilmore would fit in perfectly, and he would be back with Jack Hendricks in Denver. His reputation as a solid ballplayer was reflected in the box scores with an average of .299 in 1911 and he improved in 1912 with an average of .319.2  In 1913 “Grover Gilmore monopolized the fence cracks for Denver, lamming the pellet straight to the left center field fence on one occasion and on another larruping a dandy double. He also had a single. The Speed Kid called upon all his sprinting ability, too, twice scoring from second on stingy hits.”3

And yet, there were many ballplayers around who were working the semipro teams with dreams as big as Gilmore’s about making it to a major-league team, and he figured out he had to do something more on his own to make that leap instead of waiting for the scouts to come around and discover him on one of his best days on the field.

Offseason, Grover Gilmore wore a different uniform. He worked for the post office in

Chicago, a job that afforded him the opportunity to disappear during the baseball season and then return to delivering mail offseason, keeping at least his legs in good physical shape. Rumors were also circulating around the baseball Hot Stove League that Gilmore was also a victim of Cupid and was about to get married. A solid government job and wedded bliss were seen as possible deterrents to pursuing a baseball career.4 But the speculators had it all wrong about Gilmore’s intentions. He married Eleanor Tiede on April 12, 1913, and the newspapers reported Grover Gilmore was even faster on his feet since getting married than he was before.5

When the Federal League went “major” in 1914, Gilmore decided being an outlaw was not such a bad career decision for him. One afternoon he paid a visit to the office of Tom Gilmore, secretary of the Federal League, and brother of James Gilmore, president of the organization. Although he knew Tom somewhat, he had not yet met Jim. Grover was not a relative of the Federal Gilmores but he thought perhaps name recognition might be an advantage before he asked for anything. He appeared at the Federal League office dressed in his postman uniform and approached Tom:

“Hello, Grover,” answered Tom. “Well, wait till Weeghman gets back to town and maybe he can place you in one of his restaurants.”

“Aw, get away with that stuff,” says Grover. “I want a job playing ball with the Federal League.”

“Well, that’s different,” says Tom with a smile as wide as his face.6 And so they started talking business, and as it was getting near time for the season to open, the Kansas City Packers just happened to be in need of a solid outfielder and a decent bat. In Denver, the Grizzlies were skeptical that Gilmore would sign with the Feds as he was asking for a three-year contract stating that he was still a civil service postal worker and that he would lose his government job in order to play baseball. He figured he needed a solid contract in order to make it worth his while.7 Gilmore right away sent off a letter to C.C. Madison, president of the Kansas City club and the two came to terms.8

Gilmore had notified McGill that he would not be at the training camp at Excelsior Springs, Missouri, and instead would report to Denver, as the post office would not allow an earlier release. And then the news hit Denver by surprise that Gilmore had signed with the Federals, and who could blame him? His reputation as a good fielder and a batting average in 1913 of .335 and a fielding average of .973 in 122 games9 made him an attractive catch, and Gilmore figured, this might be his only chance to hit the big leagues, despite the stigma he might acquire as an “outlaw.” Although Gilmore did not start with the Packers until after the season started, he got himself into shape and when he did join the team, he made good on his promise to become a dependable player. His greatest asset was speed, but he was also a hitter and he was out to prove he was a major-league-caliber baseball player.

The Kansas City Packers gave Grover Gilmore the opportunity to play major-league baseball, and he made good use of the time. He put up commendable stats, posting a .286 batting average with two home runs and 79 RBIs in 258 games, and he broke no records, except for one: In 1914 as a rookie, he struck out 108 times, a record he held until Ralph Kiner in 1946 struck out 109 times. Nevertheless, Gilmore was a solid enough player, fleet of foot and, with a .287 average in 1914 and .285 in 1915, a player with nothing to regret. The Federal League folded up its tents and was no more. The Kansas City Packers finished sixth in 1914, and fourth behind the Chicago Whales in 1915.

Grover Gilmore was not satisfied with ending his baseball career along with the Federal League. He wrote to James Gilmore, president of the now defunct league, asking him where he stood, and received the reply that Harry Sinclair of the Newark club held his contract and would dispose of the same as he saw fit.10 He also approached Jack Hendricks, then manager of the American Association Indianapolis Indians, and asked if there might be an opportunity there. George Stovall stated that Gilmore had greatly improved in 1915,11 but unfortunately, no major-league teams were interested in picking him up. Instead he waited anxiously in Chicago for a word from any baseball club that might show interest, and spent the offseason working as a department-store floor-walker.

The Sioux City (Iowa) Indians of the Western League signed Gilmore to the outfield, and he appeared in 130 games in 1916 with 538 at-bats and hit .340. He and Eleanor settled in Sioux City and he worked offseason as a traveling salesman for a meat-packing company. In 1917 he started the season with Sioux City and was then sent to the St. Joseph Drummers. In 1918 and early 1919, Grover Gilmore was still sending out inquiries about any possibilities for returning to baseball. In August 1919 the El Paso Herald-Post reported that Grover Gilmore wanted to return to St. Joseph although he did not intend to be a regular player but that “he just wanted to take a vacation from his business and he finds playing ball a treat when he doesn’t have to do it as a regular thing.”12

6 “Ernest Grover Gilmore the Speedy Right Field of the Packers.”