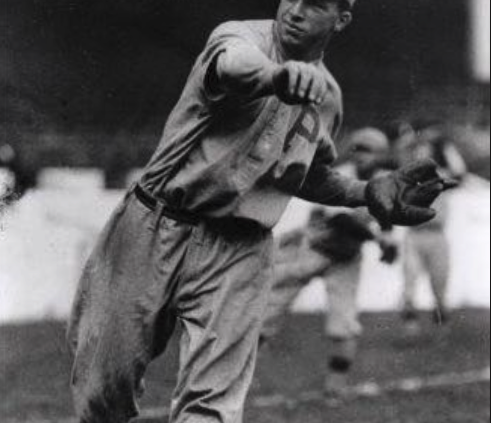 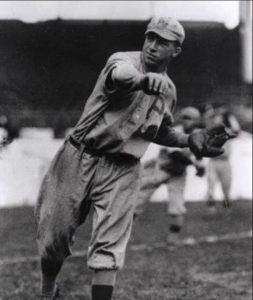 Right-handed pitcher Happy Finneran played major-league baseball for five seasons. After playing two years for the Philadelphia Phillies, Finneran jumped to the Federal League in 1914 and played until the league folded in 1915. In 1918 he pitched for the Tigers and the Yankees.

Joseph Ignatius Finneran was born on October 29, 1890, in East Orange, New Jersey. His father’s name is not known. The 1900 Census shows that Joseph was being raised by his mother, Mary Finneran. The youngest of five children, he had a sister, Mary, and three brothers, Charles, Bernard, and Christopher.

Finneran played baseball from an early age. He played in various industrial league teams in New Jersey before turning pro. He played for a semipro East Orange team in 1909. His obituary stated that in 1910 he “played for the Forest Hills [New Jersey] club where he became known as the ‘iron man.’”1 The obituary notes that Finneran once won a doubleheader for Forest Hills, pitching an 11-inning game against East Orange in the morning and a nine-inning game against the team in the afternoon.

He signed his first professional contract with the Class-C Norfolk Tars (Virginia League) in 1911. He finished the season with a 21-15 record to help the Tars finish in second place with a 67-54 record.

Finneran’s manager, Charlie Babb, brought Finneran to the attention of the Phillies organization. They kept their eye on him as he continued his success in Norfolk in 1912. He had an 18-15 record, the best on the Tars, when the Phillies called him up late in the season.

Finneran made his major-league deput on August 20, 1912, pitching two scoreless innings in relief in a 6-1 loss to the Chicago Cubs. Overall he pitched in 14 games for the Phillies, starting four of them. Finneran finished the season with a 0-2 record and a 2.53 ERA.

When the 1913 season began, the 5-foot-10, 169-pound Finneran joined the Class-B Lowell (Massachusetts) Grays. He pitched in 20 games and had a 14-2 record when the Phillies once again came calling. The team was in second place and looking to bolster its pitching staff. Finneran pitched three games in relief. He gave up 12 hits and 7 runs in five innings pitched in the waning days of the season.

When the Federal League expanded to eight teams and pronounced itself the third major league for the 1914 season, Finneran was recruited by the Brooklyn Tip-Tops. He made his first start on June 13 against the Kansas City Packers and went eight innings, losing 2-1.

Finneran failed to pitch with consistency throughout the season. He pitched a complete game, 11-2 victory against the Baltimore Terrapins on June 29. Both Baltimore runs were unearned, and the Brooklyn Eagle described Finneran as “invincible.”2

Finneran won his next three games. But he struggled in Pittsburgh where, the Eagle wrote, he “became nervous when the Pittsburg Feds evinced a faculty of touching up his delivery and thereby four bases were stolen during the game.”3

When Brooklyn returned home, the team held a “Finneran Day” in his honor. “The fans of East Orange, Newark and other way stations are to be there in large numbers and intend to give Joe some recognition of the regard in which they hold him,” the Eagle reported. “They realize that but for the Seton Haller, Jersey would not be on the map and will hand him a gold watch. Thus does Finneran class with President Wilson.”4

Finneran stayed with the Tip-Tops in 1915. On a preseason trip through the South, he pitched well in a victory over a local team in Hazelhurst, Mississippi. Finneran “worked four innings [with] only one safe hit made off [his] delivery,” the Eagle reported.5

Nine days before the season began, the Eagle commented that “Finneran had a lot of trouble rounding into form this spring, but at the present time he is ready to do battle with anyone who says that he is out of condition.”6

Finneran continued to struggle with consistency throughout the  season. When in late August he won for just the third time, the Eagle wrote the he “outlasted two of St. Louis’ best moundmen and did all around better work than they.”7

Finneran finished the season with a 10-12 record with an improved ERA of 2.80. He started 24 games and had 12 complete games.

The Federal League folded at the end of the season and Finneran was not picked up by any major-league club. He eventually signed with the St. Paul Saints (Double-A American Association).

Finneran’s success in St. Paul got the notice of major-league clubs and he started the 1918 season with the Detroit Tigers. He lost his first two starts and was released in mid-May. Finneran signed with the Yankees and made his debut with the New Yorkers on May 29, pitching 4⅓ innings to earn his first win of the season.

Finneran won three and lost six for the Yankees. His last game as a major leaguer came on September 1, 1918, when he threw three innings in relief as the Yankees lost to the Senators, 5-3. Finneran gave up four hits and no runs in his final appearance. He was released the next day.

Finneran joined the Kingsbridge Athletics, a semipro team playing at the Dyckman Oval in the far northern section of Manhattan. He pitched a complete-game victory for the Athletics on September 4, allowing two runs and scoring the winning run after getting a single.8

Although he had no offers from major-league clubs, Finneran was not willing to give up his baseball career. He moved west and was signed by the Vernon, California Tigers of the Double-A Pacific Coast League in 1919. In 28 appearances, Finneran had 14 wins and 4 losses with a 2.49 ERA as the Tigers won the PCL pennant.

In 1920 Finneran joined the Akron Buckeyes of the Double-A International League. He led the team with 20 wins, losing 11. Wanting to move closer to home, Finneran signed with the league’s Newark Bears for 1921. He pitched in 26 games and finished with a 10-9 record.

Then in his 30s, Finneran saw his playing days beginning to draw to a close. He moved out west again in 1922, signing with the Seattle Indians of the PCL. Finneran made just 16 appearances and ended the season with a 1-4 record. In 1923, his last season in Organized Baseball, he jumped back to the International League, signing with the Toledo Mud Hens. He appeared in 25 games and had a 3-7 record. He retired after the season. He was 156-119 in his 13 years in the majors and minors. He had a 3.30 ERA in his five years in the majors. Though he finished his with a winning record, his inconsistency prevented him from staying in the major leagues more than just a few years.

Moving back to East Orange, Finneran went to work for an undertaker, John Quinn, who taught him the mortuary business. Finneran started his own funeral business in 1929.

Finneran married Margaret Donlin after he retired from baseball. They had six children, John Jr., Anna, Josephine, Margaret, Kathleen, and Clare. He died from pneumonia on February 3, 1942, at St. Mary’s Hospital in Orange, and was buried in Gate of Heaven Catholic Cemetery in New Hanover, New Jersey.9

In addition to the sources cited in the Notes, the author also used Baseball-Reference.com for player, team, and season pages, and other pertinent material. FamilySearch.org was also used for some genealogical information.

9 Bill Lee, The Baseball Necrology: The Post-Baseball Lives and Deaths of More Than 7,600 Major League Players and Others (Jefferson, North Carolina: McFarland Publishers, 2009), 129.