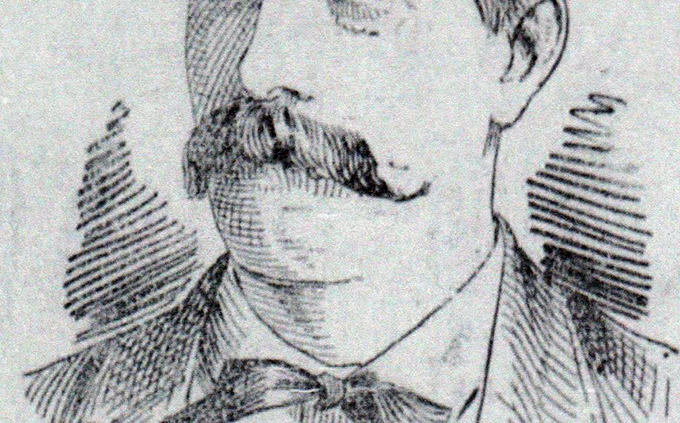 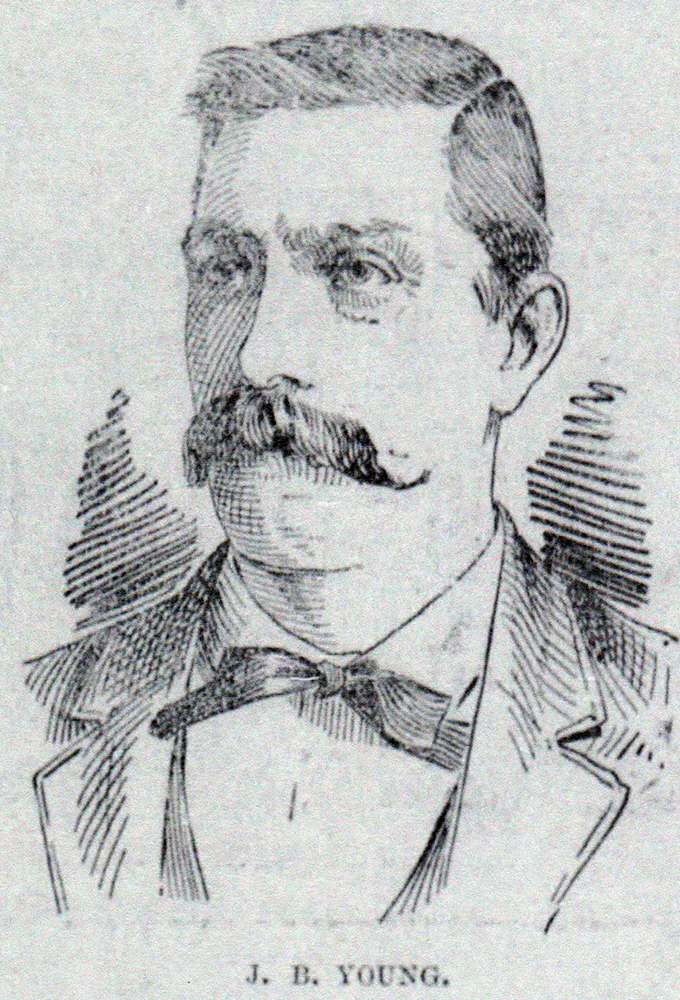 Right-handed pitcher J.B. Young celebrated his 35th birthday in unique fashion — by appearing in his first, last, and only major league game.1 Unhappily for Young, his outing on behalf of the 1892 St. Louis Browns was a nightmare: two innings-plus, 13 runs surrendered. He never appeared in another Browns game and was back home in Pennsylvania shortly thereafter. Yet like other one-game major leaguers, Joe Young (as he was known locally) led an interesting and productive life, active in the athletic, business, and political affairs of his adopted hometown of Mount Carmel.

Joseph Bartholomew Young was born on June 10, 1857, in Pottsville, a small-city county seat located in the heart of East-Central Pennsylvania’s anthracite coal region. He was the fourth of five children2 born to coal miner John Young (1825-1891) and his wife Mary (née Niekes, 1825-1910), both Bavarian Catholic immigrants.

When Joe was still a toddler, the family relocated to nearby Locust Dale, where a new mine had just been opened. By age 13, he was working in the mines as a breaker and slate picker.3 Three years later, he escaped mine drudgery to become a clerk at a Locust Dale general store. In his leisure time, Joe played on local sandlot baseball teams, including as an underhand pitcher for the regional champion Locust Dale Centennials.4 As he matured physically — eventually reaching upwards of 6-feet-2 and 185 pounds5 — and the pitching rules evolved, he developed into an intimidating hurler with a blazing overhand fastball.

In 1882, 25-year-old Joe Young married Ella (Helen) Carey, the daughter of local Irish immigrants. In time, the couple had seven children but three, sadly, did not survive infancy.6 In 1883, the family moved to Mount Carmel, the place where Young would live, work, and play ball for the next 20 years. He opened a general store but soon took up being a druggist, the occupation that he pursued, on and off, for the rest of his working life. On the diamond, Young became the star pitcher for the Reliance club of Mount Carmel, the area’s premier semipro nine. Given his imposing size and athleticism, Joe was also recruited as a center plunger (fullback) by the fledgling Mount Carmel semipro football club.7

In 1886, he and other members of the Reliance club formed the nucleus of the championship Mount Carmel entry in the newly formed but unrecognized Central Pennsylvania League. The following season, the league was accorded protection under the National Agreement, becoming a bona fide minor league. But Mount Carmel could not repeat its success, falling to fourth place in the eight-club circuit. Nor was Young the dominant force he had been the year before, his 10-11 pitching log roughly in keeping with the club’s 21-21 overall record. The decline in his productivity was later attributed to an arm injury suffered from pitching on six consecutive days for Mount Carmel and other area teams.8 A powerful (likely righty) batter,9 Joe played the outfield or first base when not in the box.

Mount Carmel’s fortunes continued to slide during the next campaign. With the club languishing near the league cellar with an 11-20 record, its board of directors acted. Manager Kendrick was supplanted by Joe Young,10 but the club showed only marginal improvement (7-11) under his command. At season’s end, the Central Pennsylvania League disbanded. By this time, Young had expanded his Mount Carmel business interests, acquiring the centrally located National Hotel, which he immediately set about enlarging. He also became involved in Northumberland County Democratic Party politics and was an active parishioner at the Church of Our Lady in Mount Carmel. Meanwhile, he continued to pitch for area teams, attracting the notice of the big leagues.

In October 1889, Young reportedly put in an impressive workout for manager Billy Sharsig, who attempted to sign the pitcher for his Philadelphia Athletics of the major league American Association.11 Simultaneously, manager Harry Wright of the National League Philadelphia Phillies was said to have offered Young an audition during 1890 spring camp.12 In addition, major league umpire/off-season scout Tim Hurst journeyed to Mount Carmel to offer Young a tryout in the minor Western League.13 But with ongoing business concerns and a growing family, Young stayed put, turning down a reported $250 per month contract offered by the Athletics.14 Instead, he remained home and pitched for a newly organized Ashland-Mount Carmel semipro club which he also served as assistant manager.15

Evidently undergoing a change of heart toward major league baseball, Young traveled to New York and Philadelphia in June 1891 to assay if there remained any interest in his services.16 But now, there was none. Upon his return home, Young gathered up many of his old Reliance club teammates and formed a new Mount Carmel team.17 He returned to the box for his hometown club the following spring. Now 34 and seemingly content, Young had his personal and business affairs in order when a belated offer to give major league baseball a whirl came his way in the form of a contract offer from the St. Louis Browns.

A four-time American Association champion in the late 1880s, the Browns had fallen on hard times — a talent-poor team headed for a dismal 56-94 (.373) next-to-last finish in the bloated 12-club National League of 1892.18 Coinciding with the release of pitcher Jack Easton and a shoulder injury suffered by Kid Gleason, the Browns signed the untested Young in early June. The Brooklyn Eagle reported that “Young, the new pitcher signed by [Browns owner] Chris Von der Ahe, is said to have tremendous speed,”19 while Sporting Life informed readers that Young “is even larger than [Jack] Stivetts and is said to possess wonderful speed but as yet has no experience of any value.”20 The Sporting News also made note of new recruit Young’s size and the fact that he was an alumnus of the same Central Pennsylvania minor league that had produced the formidable Stivetts.21 Regrettably, it only took one major league appearance to demonstrate that Joe Young was not the second coming of Jack Stivetts.

On June 10, 1892 — Joe Young’s 35th birthday — the Browns were in Baltimore for a doubleheader against the Orioles. Starting Game One for St. Louis was veteran right-hander Charlie Getzien, whom the Orioles hammered. With Baltimore ahead, 10-1, in the bottom of the third, Browns second baseman-manager Jack Crooks had seen enough of Getzien and decided to try out new pitcher Young. Few major league pitching debuts have gone worse. In two innings-plus, Young was pounded by Baltimore, surrendering nine base-hits — including two by future Hall of Famer Wilbert Robinson, then in the midst of a record-setting 7-for-7 day at the plate. He also walked two and hit three batters. Young struck out one and somehow the hapless St. Louis defense (10 errors committed overall) got him five other outs. With Baltimore ahead. 20-1, and the bases filled in the sixth, Young gave way to Ted Breitenstein, who immediately allowed the three inherited baserunners to score. Final score: Baltimore 25, St. Louis 4. When game totals were tabulated, Young was charged with a staggering 13 runs, although atrocious Browns fielding rendered eight of those tallies unearned.

Getzien was used again in Game Two, a 9-3 Baltimore victory, but Young was not, nor ever again by St. Louis. Before most of the coal region newspapers had published news of Young’s signing with the Browns, he was released and back home in Mount Carmel, his major league career completed in a single afternoon.

Undaunted by the debacle in Baltimore, Young resumed pitching for Mount Carmel as soon as he got home.22 He also focused on community involvement, subsequently opening a drug store and becoming more active in local politics. In June 1895, Young captured a contested Democratic Party nomination for the office of Northumberland County sheriff.23 But he lost the general election to Republican George K. Fagely that November. Meanwhile, the Young family was continually beset by woe. Having already lost three infant children, Ella Young’s health went into serious decline. In July 1898, she lost her two-year battle with tuberculosis, leaving four children for Joe to raise. He never remarried.

Young remained engaged as an organizer, manager, and occasional pitcher for Mount Carmel baseball clubs into the new century. But the tapering off of local newsprint mention of Young more or less coincided with the relocation of his drug store to Shamokin around 1903. In time, his sons followed in their father’s footsteps, Joe, Jr., and Frank taking up the pharmacy business while youngest son Charlie starred on Mount Carmel-area diamonds. Joe Young, Sr. continued working until about 1930, when he retired to a cottage in the Maysville Park section of Shamokin — the scene of a final family tragedy. In early 1934, Joe collected bachelor Charlie and attended to his needs at the cottage while his son suffered the ravages of tuberculosis. Charles Vincent Young died in June 1934 at age 38, becoming the fourth child Joe had to bury.24

Death from stomach cancer came to Joseph Bartholomew Young at the Maysville Park cottage on April 6, 1938. He was 80, and his passing was front page news for the Mount Carmel Item and Shamokin New-Dispatch.25 The pews were packed for the deceased’s Requiem Mass at his old parish, the Church of Our Lady in Mount Carmel. His remains were thereafter interred in the Young family plot in nearby St. Mary’s Cemetery, Mount Carmel. Survivors included sons Joseph, Jr. and Frank, daughter Ella Young Stief, 12 grandchildren, and two great-grandchildren.

This biography was reviewed by Rory Costello and Norman Macht and checked for accuracy by SABR’s fact-checking team.

Sources for the biographical information provided herein include the Young profiles in The Rank and File of 19th Century Major League Baseball, David Nemec, ed. (Lincoln: University of Nebraska Press, 2011) and Bell’s History of Northumberland County, Pennsylvania, Herbert C. Bell, ed. (Chicago: Brown, Runk & Co., 1891); US Census Reports, government records, and city directories accessed via Ancestry.com; and certain of the newspaper articles cited in the endnotes, particularly the Young obituaries published in the Mount Carmel (Pennsylvania) Item and Shamokin (Pennsylvania) News-Dispatch. Unless otherwise specified, stats and game-related information has been taken from Baseball-Reference.

1 Somewhat remarkably, Young is not the only player whose entire major league career consists of one game played on his birthday. 1918 New York Giants pitcher George Ross (June 27) and 1943 Brooklyn hurler Chris Haughey (October 3) share this peculiar distinction with our subject.

5 The size assigned to Young by Baseball Almanac. A contemporary source described Young as “a stalwart, as big a man as Jack Stivetts.” See “St. Louis Browns,” The Sporting News, June 11, 1892: 1. Baseball-Reference lists Stivetts as 6’2”/185 lbs.

8 Per Young’s obituary in the Mount Carmel Item, above.

9 According to Baseball Almanac, Young batted from the right side. Baseball-Reference, Retrosheet, and other authority list Young’s batting side as unknown.

18 In an attempt to stimulate fan interest, the National League split the 1892 season into halves, the first ending on July 13. The St. Louis Browns were not competitive during either half-season.