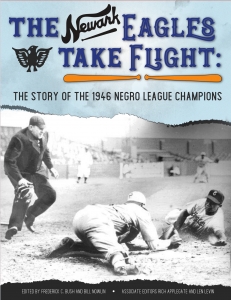 The 1946 Newark Eagles pitching staff was filled with front-line hurlers like Leon Day, Max Manning, Rufus Lewis, and Len Hooker. However, the team’s roster also lists Jimmy Boyd, who fashioned a 1-0 record with three strikeouts, two walks, and a 1.29 ERA over seven innings in two appearances (one start). Boyd signed a contract with Newark on May 25, 1946, but he was informed by co-owner Effa Manley on July 4 that he was being reassigned to the Asheville Blues and that he should report to his new team on July 8. At that point, Boyd’s tenure with the Eagles was at an end after little more than a month. Documents exist to show that he refused to go gently into that good night, although his ultimate baseball fate remains unknown.

James Edward Boyd was born on March 31, 1918, in Winnsboro, South Carolina. He was the second child of farmer Dennis Boyd and his wife, Minnie; the couple eventually had nine children – eight boys and one girl. The 1940 census shows that James Boyd worked as a granite crusher. Presumably he found time to ply his trade as a baseball player during parts of the year, perhaps as a member of a company team.

Any prospective pitching career in the Negro major leagues was put on hold as Boyd served in the US Army from February 17, 1942 to October 18, 1945, during World War II. Seven months  after his military discharge, he signed with the Newark Eagles to play for $225 per month.1

As Boyd’s statistics show, he was seldom used. His lone relief appearance came in a game against the New York Cubans, Newark’s bitter rival, on June 10 at Dexter Park in Queens, New York, the home of the renowned semipro Brooklyn Bushwicks team. After starting pitcher Cecil Cole had allowed four runs in seven innings, Boyd pitched a scoreless eighth, though he did surrender a base hit and two walks that put him in a tenuous position. The Cubans did not score on Warren Peace in the ninth inning either. They won the game, 4-1.2

After Newark clinched the Negro National League’s first-half pennant with a doubleheader sweep of the Philadelphia Stars on June 30, Boyd made his lone start, against the New York Black Yankees at Ruppert Stadium on July 2. Larry Doby hit a three-run homer as part of Newark’s four-run outburst in the third inning and the Eagles triumphed, 7-1.3 Although the box score for the game is incomplete, Boyd’s season statistics make it clear that he pitched six full innings before being relieved by Len Hooker. Newark’s victory was Boyd’s sole pitching win as a member of the Eagles.

In spite of Boyd’s successful outing, Effa Manley may have decided to reassign him as part of the Eagles’ preparations for the NNL’s second-half race since manager Biz Mackey had used him so sparingly. She wrote a letter that was postdated July 7 – one day before Boyd was to report to Asheville – to C.L. Moore, the owner and manager of the Negro Southern League’s Blues. In a rarity for the Negro leagues, the Blues served as a farm team for the Eagles. Boyd was supposed to present Manley’s letter to Moore when he reported to his new team.

Manley’s missive made clear the reason for Boyd’s reassignment, as she wrote:

I believe him to be a nice person so far as conduct is concerned, and if he gets his control he will be a good pitcher. I have seen him pitch some good games.

I believe in your league he may not be pressing so hard, and it will give him a chance to loosen up a little.4

Boyd’s statistics do not seem to indicate that he was performing poorly and Manley appears still to have considered him to be a good prospect, so he might have had a future with the Eagles. However, it is clear that Boyd was not yet prepared to go to Asheville. He may have felt that he had not been given enough of a chance to prove his mettle or that his success in his brief appearances merited keeping him on the Eagles’ roster; thus, he took actions to try to invalidate his reassignment to the Asheville club.

Evidence for Boyd’s actions is found in another letter that Manley wrote, this time to team attorney Jerome Kessler and also dated July 7, 1946, though the content indicates that it actually was written on July 8. The fact that Boyd was threatening to sue – whether for breach of contract or to have his contract voided – becomes apparent from the second paragraph, in which Manley wrote:

I am enclosing the letter from the Atty. Also a copy of the letter I had written to Mr Moore of our Ashville N. Carolina farm club. This letter was to have been delivered by Mr. Boyd. Also enclosing the contract. In the contract paragraph 3, and 5, and 5b, seem to me to take care of this situation.5

She also informed Kessler that Newark had issued a paycheck to Boyd dated July 7 and that the Asheville club had “agreed to pay him the same salary we were.”6 She expressed her concern that, “(i)n view of what has happened, if Asheville learns about it, I doubt if they will want him. No club wants what is known as a bad actor on the team. They can cause so much trouble.”7 Boyd’s actions had obviously changed Manley’s earlier opinion of him as “a nice person so far as conduct is concerned.”

In reference to the pertinent sections of Boyd’s contract that Manley referenced, they are as follows:

3) The player will faithfully serve the Club or any other Club to which, in conformity with the agreements above recited, this contract may be assigned and pledges himself to the American public to conform to high standards of personal conduct, of fair play and good sportsmanship.

(b) This contract may be terminated at any time by the Club or by any assignee upon five days’ written notice to the Player.8

Based upon these clauses in Boyd’s contract, it is obvious that he had no legal leg to stand on. However, no further documents exist to confirm whether he finally reported to Asheville or simply quit playing professional baseball; given the lack of any further news accounts or statistics on Boyd, the latter option is more likely.

Little is known of Boyd after the events of July 1946. He eventually married Lillie Bell, the daughter of Henry and Ida Bell of Fairfield County, South Carolina. (Boyd’s hometown of Winnsboro is in Fairfield County as well.) It is unknown whether the couple ever had children. James Boyd died of cerebral thrombosis at the youthful age of 47 on October 14, 1965, in a Columbia, South Carolina, Veterans Administration hospital. He is buried in Saint John Baptist Church Cemetery in Winnsboro. His widow, Lillie B. Boyd, died in Winnsboro at the age of 71 on March 3, 2001; she is buried beside James.

Gratitude is here expressed to Bob Golon, who made several trips to the Newark Public Library, scanned every document in the Effa Manley Collection, and made them all available to the authors of the present volume. Bob’s actions show the spirit of collegiality that is so often present among those who endeavor to research the history of the Negro Leagues.

All player statistics and team records listed in this article were taken from Seamheads.com.

Ancestry.com was consulted for census, military service, and death information.