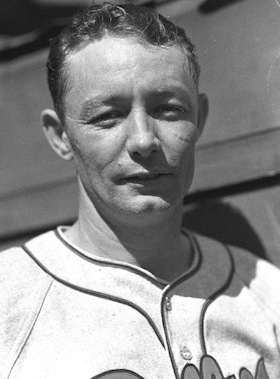 Jennings Poindexter was a lefty, and an Okie, who was apparently also something of a character. He pitched in three games for the 1936 Boston Red Sox, 11 games for the 1939 Philadelphia Phillies, and 11 seasons in the minors.

Chester Jennings Poindexter was born in Pauls Valley, Oklahoma, less than three years after the Oklahoma Territory became a state. Pauls Valley is the county seat of Garvin County and had a population of 2,937 in 1910, almost double what it had been just 10 years earlier. His father, William Thomas Poindexter, was a farmer, who had moved to the area from Missouri. His mother, Emma Jane (North), came from Arkansas. The couple had two older sons – George and Carl – when Jennings joined the family on September 30, 1910. The family lived in nearby Stratford.

Poindexter’s first appearance in professional baseball was in the Class-C West Dixie League in 1935. The Shreveport Sports began the season, but moved 80 miles west to Gladewater, Texas, on June 4, becoming the Gladewater Bears. The Bears were a Red Sox farm club, and finished the season in last place in the six-team league. Poindexter may have been signed by Texas-based Red Sox scout Bibb Falk, though farm director Billy Evans‘s name cropped up in a couple of stories commenting on the lefty. Red Sox GM Eddie Collins had traveled to Gladewater to see him.1

It was the second year in a row that Shreveport’s team had moved in midseason; in 1934, the Sports began the season in another league, the East Dixie League, in Shreveport, but moved to Greenwood on July 13. With Shreveport/Gladewater, Poindexter was 7-5 in 14 games, with a 3.06 earned-run average. There weren’t that many left-handers in the league, but when it came time for the writers and managers to select the league’s all-star team, “Jennings Poindexter of Gladewater was named the best of them.”2

Poindexter started the 1936 season with the Bears once more (now in the East Texas League) and got off to a terrific 5-0 start in an 18-day stretch, with back-to-back shutouts against Tyler and Palestine, followed by a 15-strikeout game against Marshall, a one-hitter against Jacksonville, and then another 15-K game against Kilgore.

One wouldn’t be surprised to learn that Poindexter was jumped from Class C to Single-A ball, but the “promotion” came about in an unusual way. The Dallas Steers were interested in him, but he wound up with the Little Rock Travelers, thanks to an unusual intervention by Commissioner Kenesaw Mountain Landis. There had been a deal of some sort at the end of 1935, between Syracuse, Poindexter, and Gladewater. The commissioner declared the “temperamental” (there was no explanation of the characterization) Poindexter ineligible to play for Gladewater and the deal was thrown out. He was sent to Little Rock, itself a Red Sox farm club.3

In his first game for the Travelers, Lefty Poindexter threw a three-hit shutout on the last day of May. It wasn’t all smooth sailing. On June 5 he gave up five runs in the first inning. He set a Southern Association record with 17 strikeouts in a two-hit game, on July 11 against Nashville. (He’d struck out 17 Henderson batters in a game for Gladewater the year before.) In the end, Poindexter was able to win 12 games against 11 defeats for manager Doc Prothro, with a 3.56 ERA. Despite only joining Little Rock in midseason, he led the league in strikeouts with 144.

On July 31 the Red Sox announced they had claims on him. On September 9 they purchased his contract from Little Rock. On the 10th he won his final game for the Travelers, his fifth shutout of the season, and headed to join Boston.

Poindexter’s debut did not go well. It was September 15, at Cleveland. He started the game and faced just six batters, getting only one out. He walked the first four batters who stepped into the box, and gave up a single, and was charged with four runs (and the loss). Sporting an ERA of 108.00, he was given another start by manager Joe Cronin. On September 23 he worked 6⅔ innings in Washington, allowing just one run on five hits (the outing marred by seven more bases on balls). His third and final appearance was another start, on September 27 at Fenway Park. In 3⅔ innings, he doled out five more bases on balls and gave up six runs, three of them unearned. He lost that game, too, finishing the season 0-2 (6.75). In 10⅓ innings, he walked 16 batters.

That was a good enough reason to ask a pitcher to put in more time in the minors. Whether there was another reason remains uncertain, but United Press syndicated a story claiming that Poindexter was “one of the most colorful rookies” in the game, a “wild and wooly Texan.” It continued, “Poindexter had a brief trial with the Red Sox but Joe Cronin sent him back to the Southern Association when he chased a steward off the dining car with a butcher knife.”4 It was apparently a Filipino porter, and writer Bill Dooly quoted Poindexter in print. The pitcher said he’d asked the porter what city the train was in and that the porter had replied, “What the hell do you care?” Poindexter said he shot back, “‘Why you **** heathen, ah’ll kill you.’ An’ ah went for him an’ he ran up the steps of the train and ah chased him through two cars and out the back end. He didn’t even get back on again when the train pulled out. Yeah, ah guess that was it, because Cronin didn’t seem to like me after that.”5

At some point, Poindexter acquired the nickname “Jinx.” He was also dubbed “a second Rube Waddell“6 and a “screwball loose-jointed lefthand pitcher.”7 Writer Red Smith once said he was “as wild a lefthander as ever conked an innocent bystander,” and wrote of the time in Minneapolis when he suddenly came down, late in a key game, with an arm injury the team trainer was unable to diagnose. The trainer, wrote Smith, “shook his head, [and] significantly tapped his forehead.”8

Alcohol may have had something to do with Poindexter’s erratic reputation. Jack Troy wrote in the Atlanta Constitution, “Jinx used to take a sociable highball. In fact, he didn’t always stop at one. He’d cheerfully admit it.”9

Poindexter was back with Little Rock for 1937 and in a full season was 15-10 with a 3.48 ERA. Little Rock won the pennant. In 1938 the Red Sox had him work in Double A, with the Minneapolis Millers. The Travelers had faded, falling to fifth. Manager Doc Prothro signed on to skipper the Philadelphia Phillies for 1939, and he was able to bring Poindexter with him, signing him as a free agent in the fall of 1938. Poindexter started the season with the big-league Phillies.

He worked relief in nine games through April and May, then was given a start on June 3 against the Pittsburgh Pirates. He lasted 2⅓ innings, giving up five runs (three earned). His last appearance in the majors was on June 7, three innings of hitless relief. Two days later, on June 9, the Atlanta Crackers traded first baseman Jack Bolling to the Phillies for Poindexter and cash.

Poindexter’s ERA for Philadelphia was 4.15, with no decisions. In Atlanta he was 10-7, struggling at first but then winning five games in a row; he finished the year with an almost identical 4.17 ERA. The other Philadelphia team, the Athletics, bought his contract from Atlanta in December 1939, but by the time the 1940 season began, he had been returned to Atlanta, and worked for the Crackers all season (11-7, 3.45), setting a Southern Association record with eight consecutive strikeouts on September 20 against the visiting Nashville Vols.

Poindexter began 1941 with Atlanta, but was sent to Knoxville during the season. He did spend at least a few hours in the clink after running a red light – and claiming he didn’t see it because he was colorblind.10 He was a combined 12-15. That December, three days before Pearl Harbor, Knoxville traded Poindexter to the Oklahoma City Indians, taking him back to his home state. Poindexter appeared in only 12 games (3-5) for combined work with Oklahoma City and Tulsa in 1942.

The final two full seasons of Poindexter’s career were with the Texarkana Bears. He won 15 games in 1946, when Texarkana was in the East Texas League, and 10 games in 1947 when the Bears were in the Big State League. He appeared in only 10 games in 1948

Fully back home, in Pauls Valley, Poindexter was the manager of the Pauls Valley Raiders of the Class-D Sooner State League, one of two skippers for the seventh-place team. He and Beatrice lived in Pauls Valley.

Poindexter took a position with Phillips Oil, from which he was retired at the time of his death on March 3, 1983, at Norman (Oklahoma) Municipal Hospital of metastatic lung cancer leading to cardiac arrest.