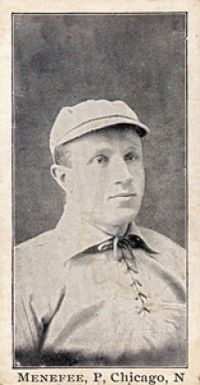 Of Scottish ancestry, John Menefee, like many Scotsmen of immigrant families who were baptized with the forename John, was nicknamed Jock early in life. He had a younger brother Tom, a catcher-outfielder two years his junior, who preceded him in pro ball by a year and spent all or part of some 10 seasons in the minors. In the late 1880s the two worked together as a battery for West Virginia semipro teams and a crack nine representing Scottdale, Pennsylvania (a small borough in Menefee’s day that was named in honor of Thomas Alexander Scott, who had been president of the Pennsylvania Railroad and the Assistant Secretary of War during the Civil War) even though Tom was left-handed.

Jock, in contrast, was right-handed all the way. A lean 165-pound six-footer, he was described by the August 5, 1893, issue of The Sporting News as a good hitter for a pitcher but “awfully slow in his delivery with a long arm swing which lets a base runner steal bases right along” and dependent almost solely on guile and a wide assortment of slow curves and drops.

By the time he made his major-league debut in 1892 at age 24, the entrepreneurial young Scot had already accumulated about seven years of experience in semipro and minor-league ball and enough cheap real estate near Pittsburgh that he became moderately wealthy when it was designated as the construction site for several new factories.

Born in Rowlesburg, West Virginia, on January 15, 1868, Menefee drew his first pro cash payment in 1891 with Erie of the New York-Pennsylvania League and went 8-7 as a pitcher-outfielder. Rowlesburg to this day is a town little more than one square mile in size. What drew Menefee to Erie or even to professional baseball, considering that he was doing quite well in the semipro ranks and seems to have been self-supporting at an early age, will probably never be known. The following year began with him a member of the Pittsburgh Tigers of the Pennsylvania State League; in mid-June he moved on to Wilkes-Barre after the Smoke City’s lone minor-league entrant since it first achieved major-league status in 1882 disbanded and transferred to the eastern Pennsylvania city. Menefee joined the National League Pirates that August around the same time as Jake Stenzel and was one of the many victims of manager Al Buckenberger’s reluctance to try new players unless injuries made it absolutely imperative. After playing right field as a late-inning replacement for Doggie Miller in his ML initiation on August 17, 1892, in a 3-1 win over Washington, he got into just one more game under Buckenberger, a mop-up four-inning relief stint in which he gave up 10 hits and six runs, and then was returned to Wilkes-Barre, where he finished the year with a 20-6 record against PSL competition.

Menefee journeyed south to Chattanooga of the Southern League in 1893 but jumped the team in the early spring when martinet manager Gus Schmelz fined him $10 for disobedience. He fled back north to Johnstown of the Pennsylvania State League. After he racked up 16 wins against only five losses for the PSL Terrors, Louisville pilot Billy Barnie wanted him badly enough to pay Schmelz $200 for his contract to get him off Chattanooga’s blacklist so that he could join the Colonels in late July.

Barnie was richly rewarded when Menefee was by far his most effective pitcher in the second half of the 1893 season, posting a 8-7 ledger and 4.24 ERA with the 11th-place Colonels at the new 60’ 6” distance. The Pirates, realizing they may have made a mistake, traded pitcher-outfielder George Nicol for him in August 1894, but when Barnie, who had wanted pitcher Tom Colcolough rather than Nicol, howled foul Pittsburgh added $500 to sweeten the pot. By the end of the year Menefee had compiled a disappointing composite 13-25 mark and was released by the Pirates after just two games in 1895 when his arm went sour. For the next four seasons he plied his trade largely as an outfielder, but his bat was too weak to keep him in the higher echelons of the minors. Following a wretched .221 season in 121 games for Kansas City of the Western League in 1897, Menefee was released and began the 1898 campaign behind the counter in his Pittsburgh cigar store awaiting a call to return to action. The New York Giants hired him for one game on June 23 when they ran short of pitchers while visiting Pittsburgh but left him behind in the Smoke City after he lost 8-7 in 10 innings. A short while later Menefee took the only offer that came his way that year and signed with Wichita of the outlaw Kansas State League.

The stats for his work in the 1898 KSL are still unavailable, but they were evidently strong enough to tease Walt Wilmot, the player-manager for Minneapolis of the Western League, into taking a flier on him in 1899 and turning him back into a pitcher. Menefee remained with the Millers for the entire season, except for a cooling off period in July, during which the July 22 issue of The Sporting News explained that he had been fined and suspended for 10 days along with “Bad” Bill Eagan of Detroit when he slugged Eagan after Eagan made an “offensive remark” to him following an unsuccessful at bat against his “junky stuff.”

The following year Menefee returned to the majors with the NL Chicago Colts and won the season opener in relief but was used sparingly after that even though he was quite effective, finishing 9-4 in his 16 appearances. He was then a semi-regular member of the Chicago rotation in 1901-03 and logged a 28-32 record during that span. On September 7, 1903, at Pittsburgh, Menefee became the only hurler in history to start both ends of a doubleheader in his coda major league appearance. In its account of the event the Chicago Tribune related that he “lasted less than two innings in the forenoon and retired before the close of the first frame in the afternoon,” as Chicago’s Clarence Currie bagged a 11-8 relief win over the Pirates in the AM game and Menefee was credited with a 7-4 loss to his original ML club in the PM contest. That October Menefee told Sporting Life’s Chicago correspondent that his future plans were uncertain: “I’m not so sure about going back to Chicago if I do continue in the game. I have been there for four seasons, and there is such a thing as a player staying too long in one town.” He then revealed her had “several offers from big towns in minor leagues to take up the reins as player-manager.”

But even though none of the offers from “big towns” ever materialized, Menefee remained in the game another five years for the sheer love of it. In 1905 the September 7 edition of the Boston Globe recounted that he had been hospitalized in Monongahela, Pennsylvania, in serious condition ever since he had suffered a fractured skull when he was beaned in a semipro game against Donora, Pennsylvania, on April 7. By that time Menefee was serving as the director of numerous banks in Monongahela Valley as well as owning brickyards and business lots in Monessen and McKeesport and was reportedly worth $75,000. Notwithstanding his off-the-field success and the beaning that kept him out of the pro ranks for two full seasons (1905-06), he continued to pitch in the low minors until he was past 40, finishing his long career in 1908 with the McKeesport Tubers of the Class-C Ohio-Pennsylvania League.

Two years later the April 23 Sporting Life sadly reported that Menefee had suffered a grievous personal tragedy the previous Saturday when his 17-year-old son Fred was buried alive in a bin of loose dirt at a factory site his father owned in Monessen. “The body was found erect and still warm with the lad’s hands above his head. It is believed the boy slipped feet first into the dirt and sank out of sight.” When Menefee died in 1953 at the Restful Acres Nursing Home in Belle Vernon, PA, it removed one of the last remaining pitchers who had hurled in the majors at the 50-foot distance. He was buried in Cochran Cemetery in the town of Dawson, Pennsylvania.

Menefee seems to have been a highly intelligent, self-made man who could no doubt have contributed a lot to what little is known about the everyday life of a professional ball player in his time. One can only regret that Larry Ritter did not begin interviewing ex-players for The Glory of Their Times 10 years earlier.

This biography is an expanded version of one that appeared in David Nemec’s Major League Baseball Profiles: 1871-1900 (Lincoln, Nebraska: Bison Books, 2011) vol. 1.

In assembling this biography I made extensive use of Sporting Life, The Sporting News, Find a Grave on the Internet, and assorted box scores and sporting news items in the New York Times, Chicago Tribune, Washington Post, and Boston Globe for details of Menefee’s professional baseball career, 1891-1910, and his subsequent life. Menefee’s major- and minor-league statistics came from www.baseball-reference.com.