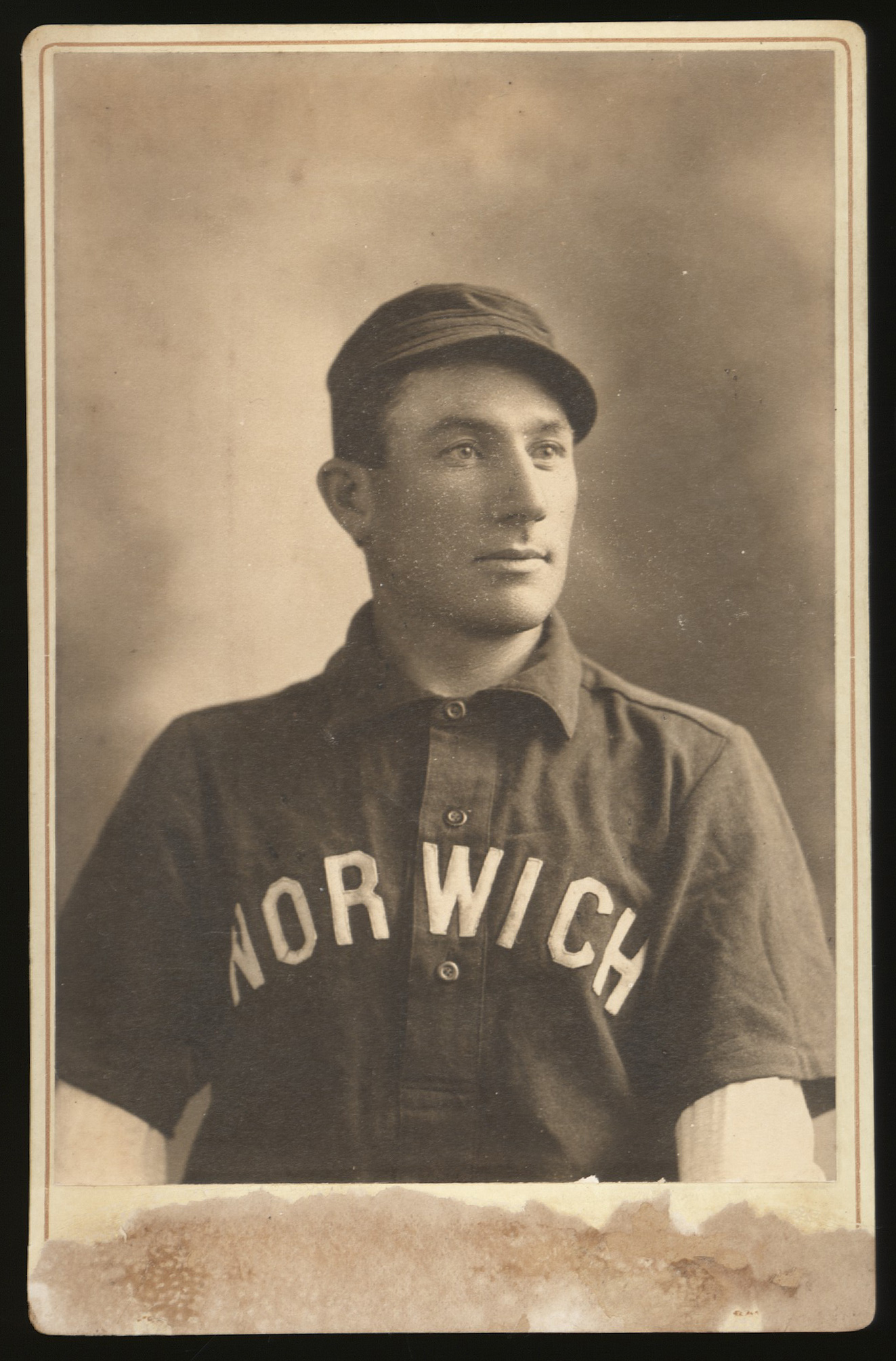 A funeral Mass was celebrated for one of Fall River’s favorite sons on Saturday, September 16, 1933, at the city’s St. Louis Church. Bouquets and tributes were sent by many of his old baseball friends and fans. Joe Harrington had been born in Fall River, Massachusetts, and he died in Fall River, having played baseball for Fall River among many other stops along the way. His brief major-league career came in late 1895 and through the majority of the 1896 season with the Boston Beaneaters of the National League. His debut with Boston was special, as he hit a home run on September 10, 1895, becoming the first major leaguer to hit a home run in his first major-league at-bat.

Joseph C. Harrington was born in Fall River on December 21, 1869, to the 39-year-old Jeremiah and 36-year-old Mary (McCarty) Harrington. Jeremiah and Mary had been born in Ireland and were part of the great Irish migration to the United States in the middle of the nineteenth century. Fall River, south of Boston and just across the state line from Rhode Island, was the center of the American cotton textile industry at the time, boasting over 120 cotton mills. Jeremiah worked in one of the local cotton mills and Mary kept house. Joe came into the world as the youngest of seven. It was a hard life for the Harringtons as it was for many in those days: According to the 1870 census, Joe’s three eldest siblings (ages 15, 14, and 12) had joined their father to work in the mill.

There would be no full-time life in the mill for Joe, however, as baseball beckoned. At the age of 21 in 1891, he joined the Woonsocket (Rhode Island) club of the New England League. He played in Woonsocket for two years, batting only .213 in 96 games (384 at-bats) in 1892,1 before joining his hometown Fall River Indians for the 1893 campaign. At the age of 23, Harrington was among the youngest on this team but the right-handed batter and thrower led the team with a .333 batting average in nearly full-time play. During 1893, Harrington played exclusively at first base for the club, managed by fellow local Michael McDermott.

Statistical records for Fall River and the New England League do not exist for the 1894 and 1895 campaigns, but we do know that Harrington continued to play for the Indians through the end of the 1895 season and that his team won the New England League championship in both of his seasons, with the 1894 team being called “one of the best ever representing Fall River in the league.”2 He is presumed to have moved off first base and primarily to third base during the 1894 and 1895 seasons as he was celebrated as “star third baseman for several seasons in the old New England League” in his funeral announcement.3 Upon his death, Harrington was not remembered as a great slugger but as a wonderful fielder:

Joe Harrington was without question one of the greatest baseball players ever developed in Fall River, and in the opinion of veteran critics, he was the best third basemen ever to play in the New England league. As a fielder he had no faults, being able to go to his right or left without any apparent exertion and on bunts he had few surprises. His great arm, which enabled him to get the ball across the diamond with bullet-like speed, was sure death to any opponents who tried the bunting game.4

In Harrington’s post-major-league return to the New England League, records were a bit stronger and he is recorded as playing 31 games at third base over two seasons. This reputation as a great New England League third baseman must have come from 1894 and 1895.

When the Fall River season ended in 1895, Harrington had earned a bigger chance. His contract was purchased on September 9 by the National League’s Boston Beaneaters led by manager Frank Selee. On the morning of September 10, when Harrington was set to make his major-league debut, Boston sat at 62-49, in fourth place, 10½ games behind the eventual champion Baltimore Orioles. Harrington joined a team featuring future Hall of Famers including pitcher Kid Nichols, who finished the year at 26-16 with a 3.41 ERA; outfielder Tommy McCarthy, who was at the tail end of his Hall of Fame career; and outfielder Hugh Duffy, who was the team batting leader with an impressive batting average of .353, after record 1894 average of .440. Hall of Fame third baseman Jimmy Collins was also a member of the 1895 Beaneaters but he spent the bulk of the season on loan to Louisville.

The regular second baseman for Boston, Bobby Lowe, was out with an injury and many Beaneaters had covered second base for a stretch. Boston called on the 25-year-old Harrington to play second base and bat eighth in his first game, on Tuesday, September 10, against the St. Louis Browns before a sparse crowd of 1,000. The Beaneaters lost the game 8-4 before heading off to New York to play the Giants the next day. The Boston Post wrote of his debut:

The Boston team was a trifle strengthened, as Joe Harrington of Fall River was secured to play second base. He filled Lowe’s shoes, and both in fielding and at the bat he acted like Duffy. When he stepped to the plate in the first inning he was given a great ovation as he approached the rubber. He responded with a home run drive over the left field fence. Harrington has come to stay. He has the style and make-up of a natural ball player. When he stands up to the plate he reminds one of the Cleveland batters. He is not afraid and meets the ball squarely. His fielding was perfect, as he handled ground balls with ease.5

Harrington added two more singles later in the game to finish 3-for-4 with two runs scored. In the field he was credited with two putouts, five assists, and no errors. The Post assured its readers that Harrington would be back at second base for that afternoon’s contest in New York.

Harrington had a scare less than a week later when he was injured in a traffic accident on the team bus after a doubleheader in Baltimore on September 14.6 Despite early fears, he returned the Beaneaters lineup quickly. Harrington manned second base for 18 of the final 20 games of the team’s season. He added one more home run and finished the season batting .277 and slugging .431 in his 75 plate appearances as the Beaneaters played out a 71-60 sixth-place campaign.

When the 1896 season opened, Harrington was a regular fixture for the Beaneaters, but at third base this time. In the offseason, the Beaneaters made a few transactions that cleared room for him. They traded regular third baseman Billy Nash to the Phillies for outfielder Billy Hamilton. Then they sold outfielder Tommy McCarthy to the Brooklyn Grooms and Jimmy Collins came back from the Louisville Colonels on his loan. Collins, who had split time between third base and the outfield for Louisville in 1895, was installed in Boston’s outfield, clearing third base for Harrington. That arrangement did not last long.

Harrington played most of the games in the first half of the season, primarily at third base with a bit of shortstop and second base thrown in.7 In that time, his defense was below average, with a range factor of 3.19 compared with the league average of 4.09. With below-average defense, his bat would have to carry the day and it did not. In 222 plate appearances in 1896, Harrington hit just .201 and slugged only .271. And so, on July 28, 1896 Harrington was released by the Beaneaters and Jimmy Collins was installed at third base.

After his release, Harrington played for many minor-league teams from the top-level Eastern League Syracuse Stars and Worcester Farmers to the New England League’s New Bedford Whalers and his hometown Fall River Indians, to even lower-level teams in the Connecticut State League, including the Norwich Reds and Meriden Silverites. After splitting time between New Bedford and Meriden in 1904, Harrington hung up his spikes and moved home to Fall River.

Harrington never married and never had children, but remained close with his many nephews and nieces. He was a favorite of Fall River baseball fans throughout his life. In his 1933 obituary, a brief story was told about a benefit game for him held some years before:

A few years ago a benefit game was staged here for Harrington and the money received as a result of the game helped to make Joe’s last years happy. He never forgot the great turnout at the benefit game, which he attended himself, and for which he was always grateful to Fall River fans.8

Harrington was long forgotten as the first major leaguer to hit a home run in his first at-bat. But he was not forgotten by the baseball fans of Fall River, Massachusetts.

In addition to the sources cited in the Notes, the author also used Baseball-Reference.com and ancestry.com

1 Spalding’s Official Base Ball Guide and Official League Book for 1893: A Complete Handbook of the National Game of Base Ball (Chicago: A.G. Spalding & Bros, 1893), 142.