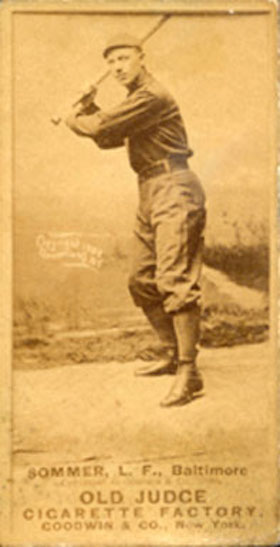 Joe Sommer was a Kentuckian through and through: born in Covington, raised in Covington, retired to Covington, and buried near Covington. In order to play professional baseball he left the Bluegrass State temporarily to ply his trade in large cities, such as Cincinnati, Baltimore, and Cleveland, and in smaller cities like New Haven, Rochester, and Albany, but he always returned to his home town on the banks of the Ohio.

Joseph John Sommer was born on November 20, 1858, in Covington, Kenton County, Kentucky, just across the Ohio River from Cincinnati.

He was the fourth of the six children of well-to-do German immigrants, Mary and John Sommer, whose original names were Anna Maria Lochte and Johannes Henry Sommer. Although Covington has since fallen upon some hard times, it was a prosperous river town during Joe’s childhood, Joe’s father and his father’s brother Benjamin owned the Central Hotel at Pike and Washington Streets in downtown Covington. The establishment must have done a thriving business serving travelers along the busy river. The 1870 census reported the value of John Sommer’s real estate was $20,000 and his personal property was valued at $3,000, at a time when the dollar was worth about 20 times its present value.

The hotel not only hosted overnight guests, but it also served as a residence. The 1870 census showed 25 residents, including eight family members, six additional employees, and 11 other persons. John Sommer died in 1877, but the family carried on the business. In the 1880 census Mary Sommer was identified as the hotel keeper, and her four sons were all listed as employees. Before the year was over, however, Joe had another occupation – ballplayer.

With no minor-league experience, Joe Sommer made his major-league debut for the Cincinnati Reds on July 8, 1880, at the age of 21. At five-feet-eleven and 165 pounds, he batted and threw right-handed. He played 24 games for the Reds that season, mostly in the outfield, but with one game each at shortstop, third base, and catcher. At the end of the season, Cincinnati was expelled from the National League for refusing to pledge that they would stop selling beer in the ballpark and stop allowing other clubs to play on their field on Sundays. After only half a season in the majors, Joe was out of professional baseball.

In 1882 Cincinnati joined the American Association, a new major league that was known popularly as the Beer and Whiskey League. Joe Sommer was back in the majors. He was clad in an all-white uniform above his knee-length red stockings and installed as the club’s regular left fielder. Sommer played a prominent role in helping the Red Stockings win the pennant in their first season in the new circuit. His .288 batting average was third best on the club and 44 points higher than the league average. He ranked second in the American Association in runs scored, fourth in hits, and fifth in on-base percentage. Good as he was as a hitter, he was even better as a fielder. He led all American Association left fielders in putouts and fielding average. According to the Faber System, he was the league’s best fielding left fielder in 1882 and also the best at the position when both fielding and hitting are counted.1

The Red Stockings breezed to the American Association pennant in 1882, finishing 11 ½ games ahead of the second-place Philadelphia Athletics. They split two postseason games against the powerful Chicago White Stockings, champions of the National League. For good reason, Cincinnati fans, with high hopes and great expectations, looked forward excitedly to the 1883 season.

Opening Day was May 1, 1883, at the Bank Street Grounds. Built on a vacant lot used for circuses and wild west shows, the field had been the home of the National League Reds before their expulsion.2 The Red Stockings had moved into the ballpark during the 1882 season and filled it way beyond its listed capacity of 2,000 for the start of the 1883 season. Edward Achorn wrote that a crowd of 3,500 was present, including two ladies on horseback and 36 carriages and buggies parked in the outfield.3 In accord with American Association policy, admission to the bleachers cost 25 cents. For an extra 15 cents the spectator could get a seat in the shade. Two Cincinnati backups, pitcher Ron Deagle and catcher Phil Powers, collected tickets at the turnstiles4. A flagstaff had been erected north of the bleachers, and a massive pennant with the letters “Champions 1883” was hoisted up the flagpole. Although the Reds had won the pennant in 1882, the lettering was correct. Under the custom of the time, the title would be Cincinnati’s until new champions were installed at the end of the 1883 season.5

The opposition on Opening Day was furnished by Chris Von der Ahe’s St. Louis Browns, one of the two teams (along with the Athletics) expected to give the Red Stockings their stiffest competition as they sought to defend their pennant. At the end of regulation the score was tied, 4-4. St. Louis went ahead, 5-4, in the top of the 11th inning. In the home half of the frame Sommer led off with a single, and scored the tying run on a double by Pop Corkhill, who then scored the winning run on a hit by Chick Fulmer.

After that auspicious start the Red Stockings continued to play good baseball, but the Athletics and Browns were a little better, and Cincinnati finished in third place. Sommer had another good season, but did not quite match his 1882 heroics. In October he and several teammates had a narrow escape. Seven Red Stockings players, a reporter, and the elevator operator crowded into a hotel elevator prior to an exhibition game in Dayton, Ohio. Late-arriving Hick Carpenter hesitated to join them for fear the car could not support any additional weight. His teammates persuaded him to get aboard. As soon as he stepped into the cage, the overloaded lift crashed down the shaft. When the car hit the cellar floor, every particle of glass in the elevator was broken. Several players received minor cuts and bruises and later complained of aches and pains, but neither Sommer nor any of the other occupants was seriously injured.

During the 1883-84 offseason, Sommer and Jimmy Macullar were sent to Baltimore, reportedly because they had tried to cause the departure from the Red Stockings of Pop Corkhill and Chick Fulmer.6 Sommer had a long stay in Baltimore, playing for the Orioles until 1890. He never hit as well in Baltimore as he did in Cincinnati, bottoming out at .209 in 1886 and averaging only .241 over the seven years. However, his fielding prowess kept him in the lineup. According to the Faber System he was the American Association’s best fielding left fielder in 1885 and the best in right field in 1889. At times he filled in at any infield position where he was needed and was the Orioles’ regular third baseman in 1884. Over the years he even pitched in six games.

During Sommer’s seven years in Maryland, the Orioles were never a serious contender for the American Association championship. Only three times did they post a winning record. Twice they finished in the cellar, eighth place in an eight-team circuit. In midseason 1890 the club’s ownership gave up. After playing 38 games, the club withdrew from the Beer and Whiskey League and joined the Atlantic Association. Sommer starred for the minor-league club. He hit .347 and stole 38 bases in 84 games. Sometime during the 1890 season Sommer played nine games for the Cleveland Spiders of the National League. According to baseball-reference.com he played his final major-league game on October 15, 1890, at the age of 31.

In 1891 Sommer played for the New Haven Nutmegs in the Eastern Association. In 1892 he divided his time between two Eastern League clubs – the Rochester Flour Cities and the Albany Senators. He then retired from professional baseball at the age of 33.

In 1886 Sommer married a 21-year-old Ohio woman named Amelia Johanna Everett. They had two children, a son, Howard, born in Maryland in 1887, and a daughter, Ethel, born in Kentucky in 1893. At the time of the 1900 census the family was living in Covington, Kentucky, and Joseph Sommer was working as a hotel clerk.

Except for a few years in Baltimore, Sommer lived in Covington his entire life. He maintained a relationship with the family’s hotel, probably working there during the offseasons even while playing professional baseball. Covington City Directories for 1897, 1900 and 1902 listed Joseph Sommer and his brother Charles as proprietors of the Central Hotel. Sometime between 1902 and 1906 the brothers apparently sold the hotel, but Joe continued working there as a clerk through at least 1910. In the early 1910s he left the hotel and went to work for a railroad. In 1914 and 1916 he was a track manager. In the 1920 census he was identified as a pilot for the railroad.

Amelia died in on May 27, 1922, at the age of 59. Joseph John Sommer died in Cincinnati on January 16, 1938, at the age of 79. He was buried in the family plot alongside Amelia and their son Howard in Highland Cemetery in Fort Mitchell, Kentucky, not far from his native Covington.

In addition to the sources listed in the Notes, the author relied on: