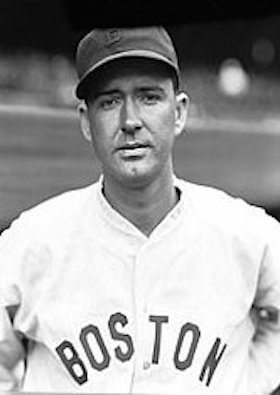 It took right-hander Johnny Welch more than five years to get his first major-league win for the Chicago Cubs. After 172 big-league games, he was 35-41 with a career 4.66 earned run average, all but two of the wins being for Boston Red Sox teams in the early to middle 1930s.

He was born as John Vernon Welch on December 2, 1906, in Washington, D.C.1 His father George was, at one point, a maintenance worker for a storage company. His mother, Jennie Welch, worked as a housekeeper for a private family.2 He attended the Webster School in Washington for Grades 1-8 and then four years at Central High School.

Welch started his baseball career at 17 in 1924. He signed with Buffalo (International League) for the 1924 season and appeared in two games, playing most of the year (with a 3-4 record) for Utica/Oneonta in the New York-Penn League. In 1925, he pitched in the Class D Mississippi Valley League for the Ottumwa Cardinals. One game very early in the season featured Welch, the youngest player in the league, facing future Hall of Famer Joe “Iron Man” McGinnity, formerly of the New York Giants, at the time age 54, pitching for Dubuque. McGinnity gave up 13 hits and Welch gave up 10, but Dubuque won, 7-3, “largely because of the loose fielding behind Welch.”3 Welch won 17 games and lost 12 for the fourth-place Cardinals, and caught the eye of the Chicago Cubs.

He trained with the Cubs and new manager Joe McCarthy on Catalina Island in the spring of 1926, but everyone knew he would need more experience. Welch was a prospect of note, however. He was, wrote Irving Vaughan of the Chicago Tribune, “a long, loose jointed kid who will not reach his twentieth birthday until next December, but despite his youth can pitch with the calmness and ease of a veteran.”4 Welch was 6-foot-3 and listed at 184 pounds. Though he threw right-handed, he batted from the left side.

It was “Grover Alexander Day” on May 22, when Welch made his big-league debut. The Boston Braves were beating the Cubs, 7-1, when Alexander was finally removed in the top of the ninth. There was one out with runners on first and third. Welch came in and got Braves catcher Eddie Brown to pop up for the second out. The Braves tried a double steal, but the runner from third (Boston right-fielder Jimmy Welsh) was nailed at home plate for the final out.

Welch pitched in two more games–1 2/3 innings on June 2 against the visiting Cardinals (he gave up one earned run) and two full innings, without an earned run, on June 6 in New York against the Giants. For the most part, Welch was “bull penning” for the Cubs.5 Indeed, he was with the team all year, but only worked those three times.

In March, 1927, the Tribune said Welch “was kept on the bench all last season” but as a new spring training opened was “beginning to show signs of knowing what pitching is all about and he is hoping that occasions will rise for his employment in parts of the game during the pending championship season.”6

Not hardly. This time he only pitched one inning, in one game. It was on June 22 in St. Louis. Though he didn’t give up a base hit, he faced seven batters and walked three of them, charged with the last run in an 11-5 loss. The Associated Press box score shows him also hitting a batter–Taylor Douthit.

Typically, a young ballplayer is sent to the minors to get “more seasoning,” but Joe McCarthy seemed to want to keep Welch at hand. In the middle of March, it was written “Welch has mastered as good a curve ball as anybody could wish for, and has a fair change of pace. McCarthy thinks he can break him gradually by letting him finish games here and there.”7 Well, maybe. But he only let him work that one inning all year long.

Welch started the season with the big-league ballclub again in 1928, and once more got into three games–April 20, April 25, and May 1. He gave up three earned runs in two innings on the 20th, three earned runs in one inning on the 25th, and just one run–earned–on May Day. Then the Cubs decided that Welch really did need some seasoning. He was sent to the Reading Keystones (International League), where he spent most of the next four seasons, 1928 through 1931.

Welch began the 1932 season on option to Los Angeles, but on April 23 he was sent back to the Cubs, Commissioner Kenesaw Mountain Landis determining that the Cubs had “exceeded the legal limit on farming out the player.”8 On May 13, he was released outright to the Newark Bears.9

He was 4-4 for Newark, but a July 22 trade of right-handers sent Pete Jablonowski (a/k/a Pete Appleton) to Newark and brought Welch to the Red Sox.10

Early in 1933, Tom Yawkey purchased the team and brought in Eddie Collins as GM. A major turnover resulted and only seven men who started the 1933 season were carried over to 1934. Welch was one of them. He kicked off the season with two wins, both over the Washington Senators, shutting out Washington on five hits in their home opener attended by President Franklin D. Roosevelt. Welch pitched in stretches of starts and stretches of relief stints, appearing in 41 games (22 of them starts) in 1934. He finished with a career-high 13 wins (13-15), with a 4.49 ERA. Only Wes Ferrell, with a spectacular 14-5 record, won more games for the Red Sox in 1934. Ferrell was also the only Red Sox pitcher to win more than he lost, excluding pitchers with two or fewer wins.

Early in the season, Welch married Frances Marie Geekie on May 18. Near the end of the season, a breach of promise suit was filed in September by Bernice Nieman, who said that Welch asked for her hand in marriage in November 1933, setting the date for May. Come May, he married Miss Geekie.12 In June 1935, the Welches welcomed a daughter.

With Lefty Grove purchased from Philadelphia, the Sox had two 20-game winners in 1935–Grove (20-12) and Ferrell (25-14). Welch was third in wins (10-9, 4.47 ERA). He’d worked in 31 games, 19 of them starts. The Red Sox finished in fourth place, the first time they’d been in the first division since 1918. Welch had been troubled by a sore arm later in the season, and had his tonsils removed over the winter, which it was thought might address the problem. Unfortunately, he had deferred the operation until early February and arrived in camp “in poor physical shape.”13

In 1936, Welch was 2-1 in April but after six relief stints in May had seen his ERA climb to 5.10. On May 21 he was released by the Red Sox. Welch was the last member of the Red Sox who dated back to the Bob Quinn days, before Tom Yawkey bought the team. It was said that he had been kept on the team not as much for what he had done on the field “but because it was feared he would develop his potentialities if traded to a rival.”14 Welch cleared waivers and was sent to San Diego; the Sox owed the Padres a player in exchange for Bobby Doerr and George Myatt.15

Welch refused to report to the Padres. When the Pirates offered him a deal, San Diego owner Bill Lane agreed to let the Pirates take him and would seek a player from Pittsburgh instead.16

He worked 22 innings in nine games for Pittsburgh, with no decisions. His ERA was 4.50. They were Welch’s last innings in the majors.

On December 4, 1936, the Pirates sold his contract to the St. Paul Saints, a Chicago White Sox farm club. Welch worked a full season for St. Paul, with a 12-19 record and 4.95 ERA. A year later, on December 3, 1937, St. Paul sold his contract to San Francisco. It took a couple of months, but in February 1938, Welch returned his contract unsigned and said he didn’t want to play in the Pacific Coast League. He asked Seals owner Charles Graham to send him to an American Association team.17 Welch was put on the suspended list instead. It was the end of his time in organized ball.

Johnny Welch contracted tuberculosis and fought it for a couple of years, confined for his last nine months in the Robert Koch Hospital in St. Louis, before dying of the disease on September 3, 1940. His widow survived him–for 59 years–dying in 1999.

1 Though both the 1920 and 1930 census say Welch was born in Maryland, his State of Missouri death certificate states he was born in Washington, D.C., as did his widow Frances when completing his player questionnaire for the Hall of Fame.

2 The author was unable to find the Welches in the 1910 census. In 1920, Jennie and John lived in Barnesville, Maryland, with her sister Susie and brother-in-law Samuel Carroll. Samuel worked as a farm laborer. At the time of the 1930 census, George and Jennie were in the same household, George with the maintenance job, and with John listed as a ballplayer.