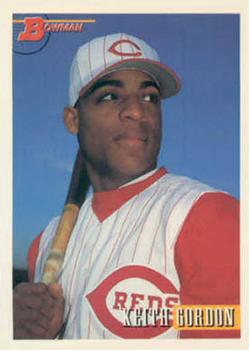 People from all walks of life play the great game of baseball. They play in Little League, Babe Ruth League, high school, American Legion baseball, and college, just to name a few. During those years they dream of one day playing in the major leagues and they are told that if they work hard and practice enough, they can do it.

A study showed that between 2006 and 2017, an average of 14.21 million people six years old and up played baseball in the United States each year.1

Based on the amount of high school seniors and college players eligible for the major-league amateur draft, there were 140,435 players available to be drafted in one year.2 From 2012-2019 just over 1,200 players were drafted by major-league teams each year. That amounts to 0.8% being drafted as an eligible high-school or college player.

One of those fortunate few was able to make his dream come true: Keith Gordon, who was born on January 22, 1969, in Bethesda, Maryland. He did all of the above. Appropriately, he played at Walter Johnson High School, as a shortstop and pitcher.

His father, William Gordon, introduced Keith to football, basketball, and baseball at an early age. William knew about the world of sports from playing college basketball at Maryland-Eastern Shore and being drafted by the NBA’s Seattle SuperSonics.3

All of the hard work of practicing and playing throughout his younger years started to pay off in high school. Gordon played all four years on the varsity team as a hard-hitting, good-fielding shortstop and pitcher and led his team in hitting starting in his freshman year. He was named to the “All-Met” team in his junior and senior years. He was the Maryland Athlete of the Year in his senior year. While in high school, Gordon also played American Legion ball and was a Selective All-Star three times.4

Asking what made him so good, Gordon responded, “I received a lot of help starting with my mother, Carolyn, and father, and my grandparents. They were always running me somewhere to a practice, or a game. My sister Erica, and brother Ali, and friends and coaches all helped me to be better. And then hard work, determination, and wanting to be the best.”

Gordon went to college on a scholarship, majoring in communications and business at Wright State University in Dayton, Ohio, for one year and then to Arizona State for two years. While in college he continued to be a shortstop and pitcher and was drafted by the Cincinnati Reds in the second round of the June 4, 1990, amateur draft. He was 6-feet-1, weighed 200 pounds, and batted right and threw right-handed.

How did he find out he had been drafted? “I received a phone call from the Cincinnati Reds telling me I had just been drafted in the second round.” What happened next? “My father was handling everything up to that point but we realized I needed an agent. Then we met with the Reds and signed the contract.”

Gordon started his minor-league career with the Billings (Montana) Mustangs of the Pioneer League, a Rookie classification. He played in 49 games, hitting .234 with a .346 on-base percentage playing shortstop.

The next year, 1991, he was promoted to the Charleston (West Virginia) Wheelers, who won the Class-A South Atlantic League championship. Switched to the outfield, he hit .268 with a .358 OBP and 25 stolen bases.

Gordon was promoted to the Chattanooga Lookouts of the Double-A Southern League for the 1993 season. A big surprise soon followed. In July he was called up by the Reds and on July 9 he made his major-league debut, in a game against the Pittsburgh Pirates in Pittsburgh. He was the starting left fielder and batted eighth. In his first at-bat, against the Pirates’ Bob Walk, he lined out to shortstop. His second at-bat produced a fly ball to center field. In the top of the seventh inning, Joel Johnston was pitching for the Pirates and with one out and the pitch count at 1-and-2 Gordon hit a line drive single to right field. He finished the night with one hit in four at-bats.

The next night, Reds manager Davey Johnson put Gordon in as a pinch-hitter for pitcher Scott Service in the top of the ninth inning. Facing Pirates pitcher Cliff Otto with teammate Chris Sabo on third and two outs, Gordon hit a groundball to first base for the third out.

For the third game in a row, Gordon found himself in the action. With the score tied 2-2 in the top of the seventh inning and one out, Reds first baseman Brian Dorsett hit a double. Needing a run, manager Johnson decided to bring in some speed and used Gordon as a pinch-runner. The next batter, Jacob Brumfield struck out. Jose Rijo tried for a bunt but popped it up. Gordon stayed in the game and played left field. He batted in the top of the ninth inning and struck out against Blas Minor.

The three games he played in July of 1993 were the only games Gordon played in the major leagues. He had one hit in six at-bats.

Asked about being called up to the majors, Gordon replied, “It was everything I had worked for, it was great. Walking out onto the field was awesome. It was a bit overwhelming for a minute but then I remembered what the manager, Davey Johnson, and shortstop Barry Larkin told me, ‘Don’t get wrapped up in the moment, it’s still baseball. Get back to what made you comfortable when you played at the other levels and enjoy it. Go have fun. “That is exactly what I did.”

Gordon did not give up on his dream of playing in the majors. He went back to the minors and finished the season with Chattanooga, batting .291 with a .327 on-base percentage and a .468 slugging percentage. “I then went to something new, the Arizona Fall League, I think it was the second year for it.”

In 1994 Gordon played in 82 games with Chattanooga and then was promoted to the Indianapolis Indians of the Triple-A American Association, where he batted .207 in 18 games. He played for Indianapolis in 1995, batting .264 and helping them to a division title.

A change in scenery happened during the offseason: Gordon was a free agent and remembering his youth and how much time his family and friends devoted to helping him, he wanted to play near enough so they could watch him play. Knowing the Baltimore Orioles had minor league teams close enough to drive to their stadiums he signed with the Orioles organization and was sent to the Bowie Baysox of the Double-A Eastern League, Gordon batted .261 and a .679 OPS (On-base plus slugging) in 82 games. Gordon showed he still had the base stealing ability by stealing 13 bases which were second most on the team, just two shy of the team leader who played in 129 games. Gordon was promoted to the Rochester Red Wings of the Triple-A International League, where he batted .250 with a .762 OPS in 33 games. The increase in OPS was due to having 10 extra-base hits in his 26 hits, five of which were home runs.5

In 1997, a huge change of scenery took place. Gordon received an offer from the Mercuries Tigers of the Chinese Professional Baseball League (Taiwan). Since he was a free agent he wanted to give it a try. There are no statistics readily available but according to Gordon the competition was similar to Double A/Triple A, and there were a few Americans on each team. During the season he learned the Cincinnati Reds had interest in him again and he packed his bags to head for the United States where the Reds sent him to Chattanooga.6

Always willing to try something new, Gordon was a free agent again and began 1998 with the Cancun Langosteros of the Mexican League, then signed with the New Jersey Jackals of the independent Northeast League. Batting .312/.354/.527, Gordon was an all-star outfielder for the Jackals and led the team to a division title. He was second in the league in RBIs (70) and third in home runs (16). No statistics are available for the Cancun team.

Winning a batting title is a big deal and Gordon did just that in 2000, batting .339 for the Atlantic City Surf of the independent Atlantic League. In 2001 he was with the same team, had the same batting average and ranked fifth in the league. He also played 24 games for the Saltillo Saraperos of the Mexican League.

Gordon played in the minor and independent leagues from 1990 through 2002. He was in the Reds organization for seven seasons, the Orioles one season, and the Seattle Mariners one season (New Haven of the Double-A Eastern League for 23 games in 2000). He definitely improved with age: His batting average for his final three seasons with the Atlantic City Surf (2000-2002) was .321, his slugging average was .544, and his OPS was .909.

Looking back on his time in baseball, Gordon said, “Spring trainings with the major-league teams were so much fun. I was practicing and playing with the major-league players and learned so much from them and the coaches, it was great. Also, each day we would receive gear from different equipment manufacturers so I always had the best stuff.”

Toward the end of Gordon’s professional playing days, he met his future wife, Julie, from Pittsburgh. When their daughter, Jenna, was born, family and fatherhood became the priority. Knowing the salary of a minor-league player and independent-league player cannot support a family. Playing professional baseball was a dream come true and now Gordon had to decide between his dream and his priorities with his loved ones. He retired from playing baseball. Leaving the baseball world was not easy but he decided to start a career in finance as a loan officer. He knew one day he would return to baseball in some capacity. A few years later he began teaching and coaching at Bullis School, a prestigious private school in Potomac, Maryland. He became the head coach of the varsity baseball team, a post he still held in 2020.

Realizing how much he enjoyed coaching and teaching baseball, Gordon began to coach a local travel team during the summer. A couple of years later, he became the coach of the 17U Mid Atlantic Red Sox, a showcase travel team.7

In 2019 the team finished second in its bracket in the Perfect Game in the Georgia tournament, which attracted 400 teams.8 Some of the players Gordon coached have gone to major universities or have been drafted by major league teams. One of the players was drafted by the Philadelphia Phillies in 2019, and during the previous couple of seasons, two were drafted by the Cleveland Indians, one each by the Houston Astros, New York Mets, Seattle Mariners, and Toronto Blue Jays.9

Although some might look at Gordon’s professional playing career as a short time in the major leagues without any evident impact on baseball, he sees his experience as a positive. “I was able to achieve a childhood dream. Now I can use all of my experiences and everything I’ve learned and pass it on to the young people of today and help them achieve their dream,” he said.

All minor-league and major-league information and stats came from Baseball-Reference.com.

The author had personal interviews with Keith Gordon on July 10, December 10, December 14, 2019 and September 16, 2020. Unless otherwise attributed, all quotations come from these interviews.