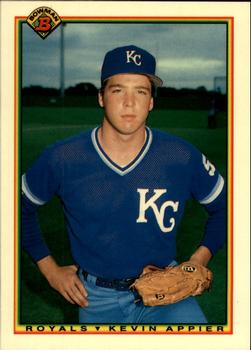 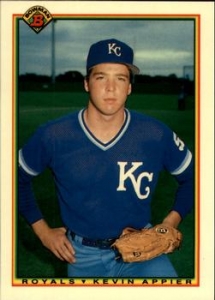 Right–handed pitcher Kevin Appier, who played 16 major–league seasons (1989–2004), was one of the best starters of his generation. He was the rare hard–throwing pitcher who developed an array of elite secondary pitches to complement his fastball. Appier’s slider and forkball were notoriously devastating, enabling him to remain a top–notch starter even after a series of injuries took away his high–octane fastball.

Robert Kevin Appier was born on December 6, 1967, in Lancaster, California, in Los Angeles County. He was one of three siblings and was raised by his mother, Betty Appier, who worked as an accountant.2 Appier starred for the Antelope Valley High School baseball team, a perennial LA County baseball power that had previously produced 1966 number–one draft pick Steve Chilcott and former Brewers, Tigers, and Angels pitcher Jim Slaton (1971–1986). By the end of his high–school career, Appier had grown into the 6–foot–2, 180–pound frame that he carried for the rest of his career.3 He accepted a scholarship to play at collegiate power Fresno State but left the Bulldog program after just three appearances in 1986 and spent the 1987 baseball season with the Antelope Valley College Marauders. “He’s a once–in–a–lifetime coach’s dream,” Antelope Valley College coach Ted Henkel told the Los Angeles Times. Henkel worked closely with Appier, helping him beef up his fastball into the 90s. After Appier posted an 11–6 record with a 2.65 ERA for the Marauders, Kansas City selected him in the first round of the 1987 draft and he signed with the Royals shortly thereafter.4

Appier progressed quickly through the Royals organization. In 1987, he posted a 3.04 ERA for the Eugene Emeralds of the Single–A Northwest League. He split 1988 between the Class–A Baseball City Royals of the Florida State League and Double–A Memphis Chicks of the Southern League. Appier won a combined 12 games against 9 losses and posted a 2.64 ERA. He spent most of 1989 with the Omaha Royals of the Triple–A American Association, where he went 8–8 with a 3.95 ERA. Appier had a brief stint with the Royals in June and July 1989 but struggled to a 1–4 record with an ERA of 9.14 in six appearances.5

After a brief stay in Omaha in 1990, the Royals called Appier up and eased the 22–year–old back into major–league action. In late April and May, Appier worked primarily as a reliever. By early June, Appier had moved into the Royals’ highly talented starting rotation which included two–time Cy Young Award winner Bret Saberhagen, Mark Gubicza, Tom Gordon, and Storm Davis. Appier proved to be a bright spot in an otherwise disappointing 1990 season for the Royals, who finished sixth in the AL West after being the runners–up to Oakland the previous season. The rookie right–hander ended up having the standout season among Kansas City’s rotation, posting a 12–8 mark and a staff–best 2.76 ERA. He finished third in Rookie of the Year voting behind Yankees slugger Kevin Maas and Indians catcher Sandy Alomar Jr., the unanimous selection of the Baseball Writers Association of America. The Sporting News named Appier its 1990 Rookie Pitcher of the Year.

Appier avoided a sophomore slump, posting a 13–10 record with a 3.42 ERA with three shutouts in 1991. While the Hal McRae–managed Royals faded into oblivion in 1992, finishing tied for fifth and winning just 72 games, the third–year pitcher asserted himself as the ace of the mound staff. With the departure of Bret Saberhagen in a trade to the New York Mets, Appier took the lead in Kansas City’s suddenly–slim starting pitching staff. He made the first of his six consecutive Opening Day starts for the Royals. For the season he went 15–8 and posted a 2.46 ERA, second best in the AL behind Boston’s Roger Clemens. In July Appier earned the AL Pitcher of the Month Award, finishing the month 4–0 with a 1.55 ERA in six starts. Despite the strong pitching performance, Appier was once again left off the AL All–Star team roster, a victim of his team’s poor performance.

In 1993 Appier asserted his claim to recognition as one of the AL’s best pitchers. Pitching a career–high 238⅔ innings, he posted a career best 18–8 record and an AL leading 2.56 ERA. He finished a career–best third in AL Cy Young Award voting behind winner Jack McDowell and distant runner–up Randy Johnson.

Appier fell from the heights of 1993 during the strike–shortened 1994 season, struggling to stay above .500 as his ERA jumped more than a run to 3.83. As a franchise, the Royals had returned to form, boasting a 64–51 mark, good for third place in the new, highly competitive AL Central Division. David Cone, who went 16–5 with a 2.94 ERA, was the ace of Hal McRae’s rotation in 1994 but was traded to Toronto for three prospects by the cash–strapped Royals before the start of the 1995 season.

Appier bounced back in 1995, retaking his position as Kansas City’s ace. He won 11 of his first 13 decisions. The 27–year–old earned his only All–Star Game selection that season and pitched two perfect innings in relief of Randy Johnson. After his fantastic start to the  season, Appier faded in the second half. His record fell to 15–10 and his ERA ballooned to 3.89.6

As offense ballooned during the latter half of the 1990s, Appier remained a strong, if somewhat less spectacular starter, on Bob Boone’s noncontending Royals teams of 1996 and 1997. The right–hander’s ERA hovered in the mid–3’s both seasons (3.62 in 1996 and 3.40 in 1997), though his won–lost records differed considerably (14–11 in 1996 and 9–13 in 1997). Appier put significant mileage on his arm both seasons, throwing a combined 447 innings. Before the 1996 season, Appier entered salary arbitration with the Royals, winning a salary increase to just over $5 million per season, a jump of more than $663,000 from the season before.7

In 1998 Appier faced his first significant injury as a pitcher, suffering a torn labrum in spring training that cost him virtually the entire season. He made just three September appearances. He also battled through a difficult first half of the 1999 season, compiling a 9–9 record with a then career–worst 4.87 ERA through the end of July. At the trading deadline, the rebuilding Royals shipped their longtime ace to the suddenly contending Oakland A’s for pitchers Jeff D’Amico, Blake Stein, and Brad Rigby. Appier continued to win games but his ERA ballooned further against steroids–era hitting. He finished the year 16–14 with an ERA of 5.17. The A’s finished the season eight games behind the AL West Champion Texas Rangers and seven games behind the Red Sox for the wild card.

In 2000, Appier, 32, played a prominent role in the “Moneyball” A’s ascent to the franchise’s first division title since 1992. He went 15–11 while posting an ERA of 4.52. He provided veteran leadership on a young staff that included Tim Hudson, who had his breakout season in 2000, and Barry Zito, who was on the cusp of greatness. Appier made his first–ever playoff appearances in the Division Series against the New York Yankees. He pitched in two games in the hard–fought series that was won by New York, three games to two. In Game Two, Appier surrendered three runs in 6⅓ innings in a 4–0 home loss. Appier gave up one run in four innings of relief in the deciding fifth game.

On December 11, 2000, the Mets signed Appier to a four–year, $42 million contract, bringing the veteran right–hander onto the staff of the defending NL champions. Appier posted an 11–10 record in 2001 with a 3.57 ERA in 206⅔ innings pitched. The addition of Appier did not prove to be the final piece in the Mets’ World Series–winning puzzle. The club struggled to an 82–80 mark in 2001, finishing third in the NL East. After the season, the Mets traded Appier to the Anaheim Angels for former AL MVP Moe Vaughn.8

Appier proved a stalwart on the Angels’ young staff, posting a 14–12 mark and a 3.92 ERA for the 99–win wild–card–winning club. Though Appier struggled during the 2002 postseason, surrendering 15 earned runs in 21⅔ innings of work, the Angels upset the Yankees, Twins, and Giants en route to the franchise’s first World Series victory.

In 2003 Appier struggled along with the Angels in their World Series hangover season. A series of nagging injuries, most notably a torn flexor tendon in his right elbow, hampered him throughout the season. He went 7–7 with an ERA of 5.63 for the 77–win Anaheim team, and was released on July 30. A week later Appier returned to the Royals. He made just four starts for Kansas City before having season–ending surgery. He missed most of 2004 recovering from elbow surgery, making just two starts that season. Appier struggled for the next two years (2005–2006) to make a major–league comeback, first with the Royals and then with the Seattle Mariners. In 2006 he retired as a Royal, more than two years after his final major–league appearance.9

Appier was a right–handed hitter who rarely batted. In a career spent primarily in the AL, Appier had 90 career plate appearances, 67 of which came during his season with the New York Mets. He posted a .096 career batting average.

In retirement, Appier moved full time to his soybean farm in Paola, Kansas, about 45 miles south of Kansas City. He and his wife, Laurie, have three children: Garrett, Britney, and Evelyn. Garrett Appier is a three–time Division II national champion in the shot–put for Pittsburg State University in Kansas.10