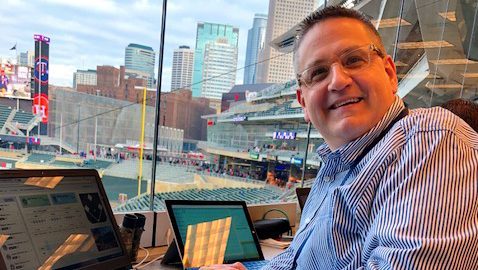 Over the past 10 years, baseball fans in Minnesota have been given the gift of watching this beloved sport in two new, spectacular ballparks — Target Field and CHS Field. While those in the stands relax on a beautiful summer evening at the Twins game in Minneapolis or the Saints game in St. Paul, there is someone sitting in the press box with an extensive knowledge of the game’s rules staying laser-focused on each pitch. Throughout the season one of these people will be Kyle Traynor, an official scorer for Major League Baseball and the St. Paul Saints.1 As complex situations arise in this “thinking man’s game,” he will calmly break down and interpret what happened in order to record information central to baseball history — statistics.

Kyle Traynor was born on October 23, 1969, and grew up with his parents and sister in West Chazy, New York. “My father and his father owned and operated a refrigeration and air conditioning business and my mom was a stay at home mom who was largely responsible for getting me to all of my sporting events in the early years before I could drive,” said Traynor. West Chazy was a small town in the northeastern corner of the state close to the Canadian border, so close, in fact, that he became an avid Montreal Expos fan. “My grandfather was a big baseball fan,” he said. “I have fond memories of sitting in a boat on Lake Champlain with my father and grandfather trying to pick up the game on our transistor radio. We’d go to games at Olympic Stadium — it was this big, giant cement structure and the playing surface was garbage but it was all we had. I still contend that it was a better ballpark than the Metrodome; at least at Olympic Stadium I could follow the ball.”

He played baseball in grade school but had to switch to hockey and golf as he got older since his high school didn’t have a baseball team. As a kid he would write to his favorite player, former Expos catcher Gary Carter. “I wrote to him several times and I’d get photos back with the inscription ‘To Kyle — Best wishes, Gary Carter.’ I have no idea where those photos are now,” he says with a laugh. He also collected baseball cards and remembers a game he invented to play by himself. “I’d put together lineups and do something like a dice game where two was a hit, seven was a grand slam, etc. I lived in a tiny town and had to entertain myself so it was pretty rudimentary. Strat-o-matic would have been a dream for me.”

After attending college in New York, Camden Yards was the first “real” ballpark he visited while in medical school at Georgetown. However, throughout medical school and while doing his residency at the University of North Carolina his fandom decreased, mostly due to the intense training required of him as a young doctor but also for one other reason. “In 1994, the Expos were really good and because of the strike they didn’t get to finish the season, so in addition to being too busy to watch baseball I was also just pissed,” he said. After several years of establishing himself as an OB/GYN physician, he talked with a Mayo Clinic staff member while in Florida at a board review class. “I had decided that I didn’t want to do gynecological surgery. I wanted to teach and do obstetrics,” Traynor said. “When he said I would have that opportunity at Mayo, I thought, ‘That’s where I want to be.’”

After moving to Rochester, Minnesota, in 2003 with his wife Lisa, “I finally felt like I had time to breathe again,” he said. Watching the Twins and the Rochester Honkers, a Northwoods League summer collegiate team, rekindled his love for the sport. “Minnesota may be the state of hockey but people here love baseball too. Where I came from there wasn’t a lot of opportunity to watch baseball and I found that I enjoyed the Honkers so much that I bought my parents season tickets when they moved here.”

Before the 2011 season, the Honkers owner/general manager saw him in the gift shop and, knowing his father came to almost every game, asked if he thought his father would be interested in being the team’s official scorer. “I knew my dad wouldn’t be interested but I told him I’d love to do it. I had to push back on him since he was hesitant because of my day job, but once I was able to adjust my schedule to make all of the games he gave me a chance,” Traynor said.

“My grandfather taught me the basics of scorekeeping as a kid but I remember just putting ‘GO’ for groundout…I didn’t even know position numbers until I really started cramming before the season started. There is a steep learning curve going from being a fan to being an official scorer, so much goes into it. Is that an earned run? Does he get an RBI there? How would I have reconstructed that inning? But I had never had a hobby to focus myself intellectually outside of medicine so I absolutely loved it,” he said.

“Kyle thinks through things quickly and he’s also very inquisitive and constantly learning,” says Matt Bomberg, Northwoods League, Great Lakes Division President. After meeting Gregg Wong, a Major League Baseball official scorer working Twins games, he invited Wong to join him in the press box at a Honkers game. “Kyle is a very bright guy and I could tell that he had an eye for observing situations during the game that a lot of people don’t see,” says Wong. “He picks up on things and is very analytical so it’s always interesting to talk with him about certain plays.”

Now into his 10th season as an official scorer, Traynor has experience at the collegiate, minor-league, and major-league level. He began with the independent league St. Paul Saints in the American Association in 2012, and became one of the official scorers for Minnesota Twins games at Target Field in 2014. He has been the official scorer for both the Northwoods League and American Association All-Star Games. He says his most memorable games as an official scorer are his first major-league game (May 17, 2014, a 4-3 Twins win over the Seattle Mariners) and Game Three of the American League Division Series at Target Field against the New York Yankees in 2019.

So what’s the difference between official scoring at these levels? “The most obvious thing is the level of play,” he says. “It’s trickier at the collegiate level because you’ll see the kind of goofy plays that you’d never see in MLB. A fielder throws home when they shouldn’t be throwing home, the ball bounces off the backstop, the catcher throws to third and it goes into left field and the left fielder throws another runner out at home…plays that just go on and on and you have to figure out how to record that. Also, at the collegiate level the questions are more about the rules: how does the batter get an RBI there?

“I remember pulling into the parking lot for my first game with the Saints at Midway Stadium and going from 500 people to 5,000 people. I felt intimidated at first but the scoreboard operator from the Northwoods League had come to the game with me and he turned to me and said, ‘Little League or minor league you know how to do it, now just go and do it.’ I told myself the same thing when I started at Target Field.”

After learning Pointstreak, the computer program that both the Northwoods League and the American Association use, he has never returned to keeping score on paper. “It was another learning curve figuring out how to put everything in but it also keeps track of everything so it’s great not to have to spend time at the end of the game totaling up at-bats, assists, putouts, and everything else we’re responsible for,” he said. “I wouldn’t want to do it manually now because I feel like I would forget something!

“There is obviously much more pressure at the major-league level because there is so much at stake. It can be stressful — everyone is watching and there is an appeal process so when you get questioned you know it’s real. MLB is improving the scorer’s life through technology, though — at Target Field we can pull up all of the different video angles available at the ballpark and they are starting to do something called simulation, a computer program which helps during relays and rundowns so you don’t have to go back to the video to determine the sequence of the shortstop throwing to the third baseman throwing to the catcher throwing to the third baseman….”

Traynor’s love of teaching (he has been selected as teacher of the year in the obstetrics and gynecology department at the Mayo Clinic several times) has also translated to baseball. Although he no longer does Honkers games, he holds an introductory class for new official scorers in the Northwoods League each season. “They love him,” Bomberg says of the young scorers Traynor instructs. “He’s very responsive and open to helping when we’ve had unusual situations come up. His knowledge is extremely valuable to me and the league.”

When he’s not doing official scoring, he works at Target Field as a Balls, Outs, and Strikes Spotter, an MLB datacasting position that populates their Statcast information. While continuing his work as an obstetrician and living in Rochester with his wife, a nurse at the Mayo Clinic, he plans to continue working in baseball as long as he can. A lot of official scorers are those who have spent a lifetime around the game, but Wong points out something unique about Traynor’s experience: “Kyle is the only physician/official scorer in MLB and I think that’s great. Maybe it will convince people from other professions to get involved. He clearly has a passion for it.”

This biography was reviewed by Bill Nowlin and Norman Macht and fact-checked by Kevin Larkin.

1 Unlike Major League Baseball, official scorers work for the team (St. Paul Saints) not the league in the American Association.