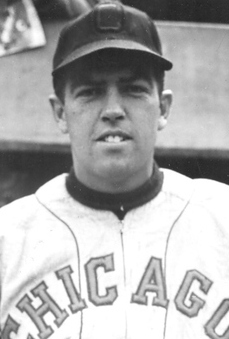 Loyd Christopher hit a home run on the first pitch he ever saw in professional baseball. He was playing for the Akron Yankees in 1938. New York Yankees scout Bob Coltrin had signed him the year before, and the team had assigned him to the Class-C Middle Atlantic League Akron team to start his career.1 Loyd was an outfielder who made it to the majors during the war year of 1945, and played for three teams over two seasons, but only in a total of 16 games.

Loyd Eugene Christopher was born on December 31, 1919, in Richmond, California, to Frank and Adele Christopher. Frank, a native of Washington, worked in an upholstery shop. Adele was born in California to German immigrants. Loyd was the youngest of four, preceded by a sister, Clara, and brothers Frank Jr. and Russ.

Frank Christopher was an upholstery merchant at the time of the 1930 census, but the business may have been hit hard by the Depression. In 1940 he was working as a pipefitter in a local petroleum refinery.

Loyd attended Washington Grammar School, then Roosevelt Junior High, and finally Richmond Union High School. He played high school ball, played for the Point Richmond Post in American Legion ball, and played some semipro baseball. He also swam some in high school, and – had it not been for baseball – expected to become a mechanic of some sort.2 Loyd was right-handed, standing 6-foot-2 and listed at 190 pounds.

After signing with the Yankees, Christopher played for three different teams in 1938. With the Akron Yankees, he played center field, working in 61 games but struggling at the plate, batting .197 despite six home runs (one of them, as noted, coming on the first pitch he saw). He was placed in the Class-C Western Association with the Joplin Miners (he hit .205 in 36 games) and then moved to the Class-D El Paso Texans in the Arizona-Texas League. He hit .248 in 26 games.

In 1939, Christopher had a breakout season at age 19 in Class-B baseball, batting .353 in 138 games with 31 homers and a league-leading 131 runs batted in for the Wenatchee (Washington) Chiefs in the Western International League. Christopher was named to the league’s All-Star team. Wenatchee finished first in the standings.

He was advanced to the Double-A Pacific Coast League in 1940, playing for the Oakland Oaks. The Oaks finished in third place. Christopher played in 166 games and batted .276. He had eight homers. Occasional newspaper articles referred to his defense, Bob Ray of the Los Angeles Times mentioning his “great center fielding.”3 The next year, 1941, he played for the Kansas City Blues in the Double-A American Association. He played in just 72 games and hit only .224.

Still in the Yankees system, Christopher was acquired by the Newark Bears in February 1942. He appeared in 93 games and hit .246, with 12 home runs, but was playing “whenever a variety of injuries permitted him in the lineup.”4

He suffered from a bad knee which required him to wear a brace, and that was the reason he was never drafted into military service.5 He had been reclassified to 1-A in August 1943, but on October 22, he was rejected due to the bad knee.6

He played all of 1944 for the Seattle Rainiers, playing in 126 games and hitting for a .284 average. He and Virginia Sanders married in 1944. And in the November 1 Rule 5 draft, the Boston Red Sox selected him from Seattle.

Meanwhile, Loyd’s brother, Russ, a right-handed pitcher, had made it to the big leagues in 1942, debuting on April 14 with the Philadelphia Athletics. His won/loss record was very disappointing (4-13), but he was pitching for a last-place team that finished 48 games out of first place with a 55-99 record. Russ’s 3.82 earned run average was significantly better than his team’s 4.45 ERA, and three other Athletics pitchers lost more games than he did. Russ worked steadily for seven seasons, never appearing in fewer than 24 games and running up a record of 51-62 for Philadelphia and then a final 3-2 for the Indians in their pennant-winning year of 1948. He had been converted to a closer in 1947 and 1948, and his 17 saves led the majors in 1948. The two batters he faced in the 1948 World Series were the last two he would face in the majors. Loyd never batted against his brother.

Loyd made his big-league debut on April 20, 1945, the home opener. Acting manager Del Baker (manager Joe Cronin was out with a broken leg) asked Christopher to pinch-hit for pitcher Emmett O’Neill. Loyd made an out in a 5-3 loss to the Athletics. No doubt brother Russ was watching from the visitors’ side of the field; two days later, Russ threw a five-hit complete game, beating Boston, 6-1. Five days later, Russ beat Boston again, allowing six hits.

In two early May pinch-hit roles, Loyd walked and made another out.

Then he got his first start, in Cleveland on May 11, playing center field. He had a very strong game, three singles in four at-bats, with a base on balls and two runs batted in. The Sox won, 8-4. They next played two days later in Detroit and again put up eight runs, to win the first game of two, 8-2. Again, Christopher drove in two runs. He was 0-for-3 in the second game of the doubleheader. He pinch-hit twice more, once drawing a walk and the other time striking out, but he was seen as surplus and put on waivers. The Chicago Cubs claimed him on May 26.

Christopher was with the Cubs for a month and half but only got into one game, on May 30 as a defensive substitution in left field. He did not get a plate appearance and on July 13, the Cubs optioned him to their Los Angeles Angels affiliate. He didn’t play much with them, either, only appearing in nine games.

In 1946, however, Christopher had an excellent year for Los Angeles, batting .304 in 158 games with a league-leading 26 homers and 96 RBIs. He was still on a Cubs contract; on November 1, he was taken by the Chicago White Sox in that year’s Rule 5 draft.

He opened the 1947 season with the White Sox and played in seven games, all as a left fielder and all between May 4 and May 13. He was 5-for-23, with one run scored but none driven in. On May 21, it was announced he would be returning to the Angels. His games with the White Sox were his last in the major leagues.

With Los Angeles, Christopher played in 70 games but without nearly the success he’d had in 1946. He hit for a .228 average with 23 RBIs.

For the next five seasons, 1948 through 1952, Christopher played for the Oakland Oaks. The first four seasons, he played in more than 120 games each year and batted over .300 in every year but 1949. The Oaks, under manager Casey Stengel, finished first in 1948, second under Chuck Dressen in 1949, returned to first under Dressen in 1950, but under Mel Ott in 1951 they fell to fifth place. The team recovered to second place in 1952, but Christopher only played in 81 games, batting .258. A knee injury caused him to retire from baseball.

In 1955 he felt he had recovered and decided to give baseball another shot; he signed in March with the Stockton Ports of the Class-C California League. He only appeared in seven games. They were his last in professional baseball.

In the early 1950s, Christopher became an automobile salesman in Richmond, working for Claar Chevrolet. In 1957 he took up work as a scout and became a very successful one, signing – among others – future Hall of Famer Dennis Eckersley for the Cleveland Indians. Thanks to Rod Nelson of SABR, here is a summary of Christopher’s scouting history:

He was still a scout, back with the Angels, as the time of his death, in Richmond, of prostate cancer on September 5, 1991. Brother Russ had predeceased him. His wife and son, and five grandchildren, survived him.

Loyd and Virginia had a son, also named Loyd, who played one season of pro ball in Magic Valley, Idaho, with the Pioneer League team there in 1966.7

In addition to the sources noted in this biography, the author also accessed Christopher’s player file and player questionnaire from the National Baseball Hall of Fame, the Encyclopedia of Minor League Baseball, Retrosheet.org, Baseball-Reference.com, Rod Nelson of SABR’s Scouts Committee, Bill Lee’s The Baseball Necrology (McFarland), and the SABR Minor Leagues Database, accessed online at Baseball-Reference.com.