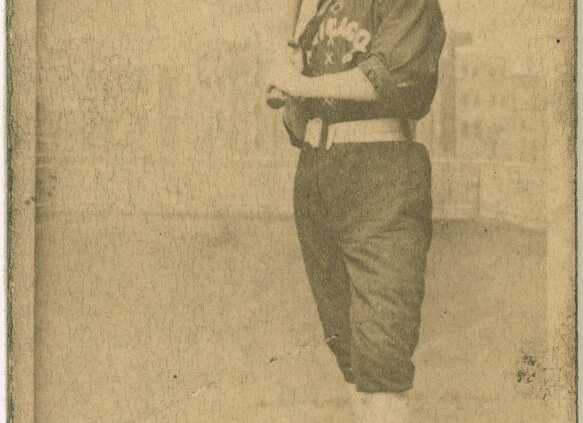 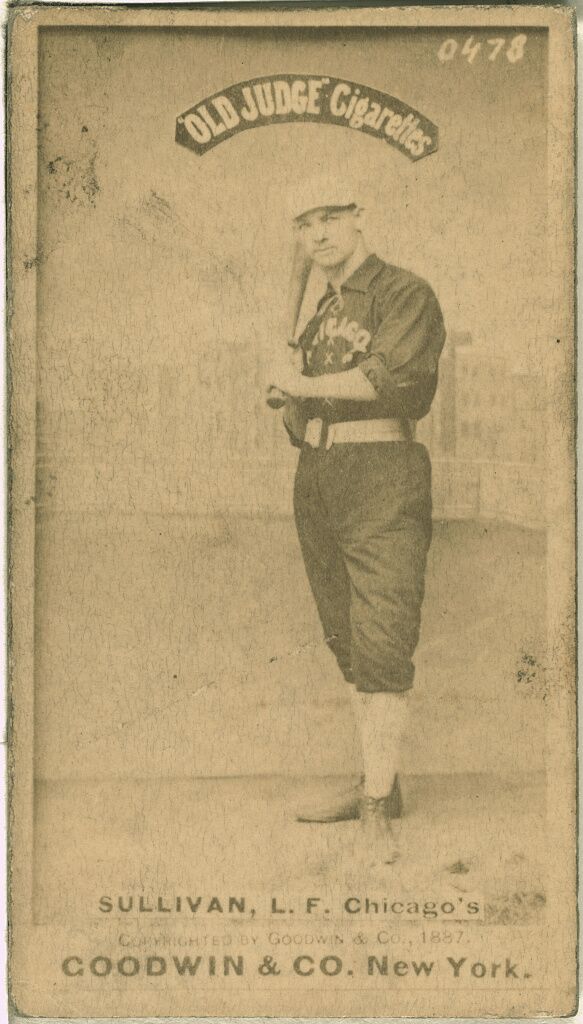 Marty Sullivan was a ballplayer who, at his prime, “was second to no left fielder in the country,” according to Hall of Famer Cap Anson.1 In his five-year major-league career, Sullivan played for four different teams, compiling a .273 lifetime batting average.

Martin C. Sullivan was born in Lowell, Massachusetts, on October 20, 1862, the third child of Michael and Mary Ellen Sullivan, Irish Catholic immigrants. Mike Sullivan was a leather currier, and his wife stayed home raising the children: Marty and his sisters Mary, Margaret, Marcella, Lizzie, and Kate, and brother Francis. By 1880, Mike had died has passed away, and Mary Ellen was raising the children as a widow.

As a boy, Sullivan was “the envy of his schoolmates on the ball field.”2 His first professional team was the short-lived X.Q.Z. team, with whom Sullivan signed on as a catcher. In 1884 he signed with the Mathew Temperance team, one of the strongest amateur teams in Massachusetts. His first professional club was the Concord, New Hampshire, team, as a catcher in 1885. He spent the 1885-86 winter playing in San Francisco, and afterward, he returned east and played for the Boston Blues.

On September 26, 1881, the 18-year-old Sullivan married Bridget Hogan. In 1885, Bridget gave birth to a son, Martin Charles Sullivan. Tragedy struck the family in 1887, when young Martin died of brain disease.3

Tim Murnane, a former major-league player, was a sportswriter for the Boston Globe and “assumed an unofficial role with the New England League”4 as an indirect publicist. He also acted as a scout for Cap Anson and the Chicago White Stockings. If Murnane saw any talent in players in the New England League, he would send them Anson’s way. The first ballplayer Murnane signed was Sullivan, the catcher for the Boston Blues. After the 1886 season, Sullivan signed with Chicago.5 Anson converted the backstop into an outfielder, and in 1887 Sullivan played 115 games for the White Stockings as an outfielder. He debuted on April 30, going 1-for-4 with a run scored in a 6-2 loss to Pittsburgh. Sullivan tripled in the ninth inning and scored on a passed ball. He also pitched one game that season, going 2⅓ innings, giving up six hits and a walk while striking out one. Anson was the team’s star, batting .347, but the 24-year-old Sullivan was fourth in average on the team, at .284. (The league batting average was.269.) He led the team in triples (16) and was third in hits (134), and the swift outfielder stole 35 bases. But the rookie also made 36 errors in the outfield.

In the winter of 1888-89, the White Stockings made a round-the-world barnstorming tour. During the tour, assembled by Albert Spalding, “the Chicago and All-America teams played 53 games of four innings and upwards.”6 Sullivan played left field for the Chicago squad. The two teams traveled westward across America, then to Australia, Ceylon, Egypt, Italy, France, England, Scotland, and Ireland, before returning to the United States and playing their way from the East Coast back to Chicago. Their games started on October 20, 1888, and finished on April 20, 1889. The success of the tour is summed up in this excerpt from the Melbourne Sportsman: “The best evidence offered that Melbournites were pleased and interested in the exhibition lies in the fact that the crowd of nearly ten thousand people remained through not only nine but twelve innings of play, and then many of them stayed to see a four inning game between the Chicago team and a nine composed mainly of our local cricket players, who made a very creditable show, considering the strength of the team they were playing against, and the fact that they were almost utter strangers to base ball.”7 One of the highlights had to be playing on the sands in front of the Pyramid of Cheops on February 9, 1889, and then climbing the Sphinx, to the horror of the locals.

Sullivan was released by the White Stockings on April 24, 1889. Six days later, he signed with the Indianapolis Hoosiers of the American Association. The Indianapolis News said he left Chicago because of a “disagreement with Anson.”8 Sullivan was expected to be in Indianapolis in time for a game on May 1 against the White Stockings, but he delayed leaving his home in Massachusetts in a dispute over advance money.9 After three days Sullivan was still a no-show. So, the fans were told, “Sullivan may delay reporting all he pleases but he can’t play with any other club, and he is not drawing salary, in which there is some comfort.”10

On May 4, it was reported that “if Sullivan ever gets here, he will likely be assigned to center.”11 He finally arrived on the evening of May 6, in time to play on the 7th against Pittsburgh. It was worth the wait: “A base on balls and two home runs, besides acquitting himself satisfactorily in the field, marked Martin Sullivan’s appearance with the Indianapolis team yesterday, and it was good enough for a player of greater pretensions.”12 Sullivan, playing right field, knocked the ball over the left-field fence in the fourth inning. He added a two-run shot, again over the left-field fence, an inning later. For the game he was 2-for-3 with a walk, two runs scored and three runs batted in. After Sullivan’s second home run, “a shower of silver was thrown to him from the grand stand, and he realized several dollars by his successful work.”13 In 69 games with Indianapolis, Sullivan batted .285 with 50 walks, well above the team batting average of .278 and the league average of .266.

In addition to roaming the outfield, Sullivan also played five games at first base, and he was more than adequate as a fielder. With the Hoosiers, Sullivan was a fan favorite. “If he will take proper care of himself his popularity will continue. But it rests with himself,” the Indianapolis News wrote on August 19.14 Three days later, on the 22nd, Sullivan played his last game for Indianapolis, against the Cleveland Spiders. The next day, he and Cleveland’s Chief Zimmer umpired the game, but he would no longer be part of the Indianapolis lineup. On September 12 Sullivan was released by the sixth-place Hoosiers. According to the Indianapolis News, “some such disposition of his case has been anticipated ever since [Paul] Hines was replaced at first.”15 By putting Sullivan at first base and then using him as an umpire, the Hoosiers seemed to be telling him that they had no room for him on the team. The Indianapolis team finished the season in seventh place at 59-75.

The 1890 season began with Sullivan playing left field for the Boston Beaneaters, under manager Frank Selee. On Opening Day before 3,882 spectators, he had two hits, a stolen base, and two runs scored in a 15-9 win over the Brooklyn Bridegrooms. The Beaneaters finished in fifth place and Sullivan batted .285 in 121 games, third-best on the team. Sullivan drew 56 walks and drove in 61 runs.

The next season, Boston took the National League pennant. With John Clarkson, Kid Nichols, and Harry Staley accounting for 83 of the team’s 87 victories, the Beaneaters finished the season 3½ games ahead of the Chicago Colts (née White Stockings). Despite a nine-game winning streak earlier in the month, Boston finished June with a record of 30-27, and Selee’s squad was in third place. Sullivan wasn’t leading the charge, batting just .224 in 17 games. He had scored 15 runs, but had only 15 hits. On May 1, he hit a home run and scored twice in a 13-6 loss to Brooklyn, but otherwise there is little record of him in the box scores. He was released on July 12.

Sullivan signed with the Cleveland Spiders on August 14. He played only game for the Spiders, getting an RBI single. He was 1-for-4 at the plate and played right field for the entire game. His obituary in the Lowell Sun said he was injured in the game, a close contest won by Cincinnati. Sullivan, “while running from first to second base during the game, injured one of his feet very seriously and suffered with it to the time of his death.”16

Released by Cleveland, Sullivan returned to his hometown of Lowell. He had played in 398 games for four teams, with a .273 batting average and 220 RBIs.

In the 1892 Lowell City Directory, Sullivan is listed as a “baseball player.”17 A year later he was working as a clerk in Lowell’s Washington Tavern.

Sullivan died on January 6, 1894. At the time, he was living at the family home, at 350 Suffolk Street in Lowell, and working as a laborer. The official cause of death was phthisis or pulmonary tuberculosis. News of his death at the age of 31 was on the front page of the Lowell Sun, his hometown paper, which wrote that “his popularity was not confined to his native city but extended to all the large base ball centers in the country where during his base ball career he had by his magnificent playing and gentlemanly conduct on and off the field, made hosts of friends, and admirers.”18 The obituary stated that Sullivan was survived by his mother, a sister, and two children.

5 Murnane’s most famous signing was Hugh Duffy, a star in the New England League and later a Hall of Fame player for the Chicago White Stockings, Boston Beaneaters, and Philadelphia Phillies.