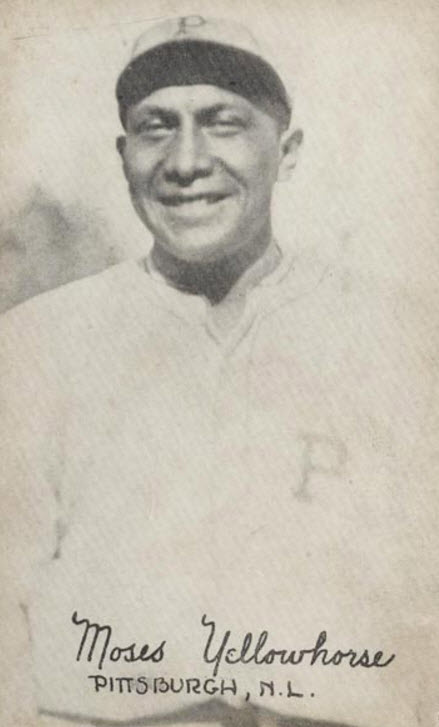 People love stereotypes. One can force a group into a category without thinking about the individuals who make it up. After all, thought takes energy, and creators of stereotypes just might find out truths about people that they were blind to. What is worse, they might have to change their minds. The downside to such a high-minded dismissal of stereotypes, of course, is that they often contain an element of truth. Unfortunately, Moses J. Yellow Horse for much of his life contributed to the stereotype of the drunken Native American.

Nevertheless, Yellow Horse redeemed his dignity by living a life of atonement to himself and to his people. Since he played just two years in the major leagues, his redemption was not so much one of athleticism as of the soul. He stopped his drinking cold turkey and got a steady job. His people, once alienated from him, accepted him back and he became an elder in the Pawnee tribe. The tribe was always proud of him for his athletic achievements, but now they respected him for his beating drink and gaining steady employment. As an elder of the tribe, Yellow Horse lent the wisdom and knowledge he gained from his trials to those who sought him out.

The Trail of Tears has never really ended. Native Americans were rounded up onto reservations much like concentration camps and denied their inalienable rights to the land they once roamed. Some shrugged it off as Manifest Destiny; others condemned it as outright robbery. Either way, eons of freedom came to an end for the Indians. They became strangers in their own land.

The Pawnees, rich in religion and mysticism and whose history went back many centuries, were herded into camps in the Oklahoma Territory. The tribe was divided into four bands: Skidi (Wolf Band), Kilkihaki (Little Earth Lodge Band), Tsawi (Asking for Meat Band), and Petahauirata (Man Going Downstream Band).

Clara and Thomas Yellow Horse were children when the Pawnees were forced to relocate from Nebraska to Oklahoma in 1875. Though not as long a journey as the Trail of Tears, it was just as arduous, with many dying of disease and starvation. In 1879 the population of the Pawnees was reported at 1,440, a drop of fifty percent in 15 years. Thomas and Clara met in Oklahoma Territory, married (just when is not known), and settled down on a farm.

It was in Pawnee, Oklahoma Territory, that Moses J. Yellow Horse was born on January 28, 1898. The family belonged to the Skidi or Wolf Band of Pawnees. Moses developed his pitching arm by throwing stones at small game to help feed the family. Powerfully built at 5’10” and 180 pounds but an amiable person, he was quick to make friends and had a great sense of humor.

Still, when he reported to Pittsburgh in 1921, he was both exhilarated and anxious as to how to conduct himself in a big industrial city with large steel plants and towering smokestacks, not to mention masses of humanity. Needing someone to help him adapt to the big city, he gravitated toward shortstop Rabbit Maranville, a notorious hellraiser, to say the least. The two became friends, rooming together on the road. They caroused and drank so much that Bill McKechnie, manager of the Pirates at that time, also roomed with them to keep an eye on the two crazies. One night McKechnie went out to catch a movie. Maranville and Yellow Horse after some libation decided to catch pigeons as they sailed past their sixteenth-story window in the hotel. After nabbing their lot, they stuffed some of them into McKechnie’s closet and the rest in Yellow Horse’s closet. When McKechnie returned from his movie, he found Yellow Horse and Maranville sound asleep and thought himself a lucky man. Then he opened his closet and let out a howl as a flock of pigeons swarmed at him. Maranville awoke at this point and told McKechnie not to open Yellow Horse’s closet because his pigeons were in there. McKechnie understandably decided not to room with them anymore.

Because of his easygoing manner and sense of humor, Yellow Horse got along somewhat more easily in the white man’s world than most other Native Americans. The roles were reversed, however, when he took the mound. He was no longer the oppressed Indian; he was the guy with the hard round sphere that would be hurled at a white batter.

The Pawnees appeared to have been assimilated more easily into the mainstream of Euro-American life than did other tribes. Yellow Horse and his parents wore white men’s clothes and lived in a permanent structure on their own farm. He attended school as ordered by the Indian Agency, an order intended to acculturate him into American society. With this background he fit more easily into the broader society. Despite this acculturation, there must have existed a pull to retain at least some ancient customs. For a millenium the Pawnees had a rich history, and they did not give it up easily. Indeed, Yellow Horse was quite knowledgeable about his tribe’s culture and augmented his knowledge all of his life.

Yellow Horse started playing baseball at the Chilocco Indian School in Oklahoma. He went 17-0 in 1917 for the school. He then started his professional pitching career for the Arkansas Travelers of the Southern Association. Helping the team to its first championship in 1920, he went 21-7. Kid Elberfeld, his manager at Arkansas, had batted against Walter Johnson and felt that Moses was as fast as Johnson. 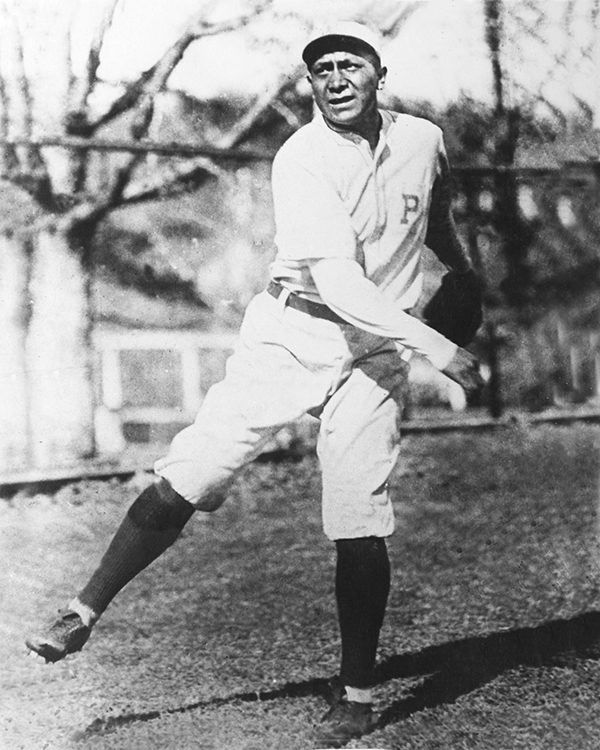 In 1921 Yellow Horse came into the major leagues with the Pittsburgh Pirates, making his debut on April 15 in relief of Earl Hamilton in a 3-1 win over Eppa Rixey and the Cincinnati Reds. He made a few starts but was used mainly as a relief pitcher. Spending only two years with Pittsburgh, he had an 8-4 record.

Yellow Horse’s tenure with the Pirates was a time of great expectations for that did not pan out. Injuries and a drinking and carousing problem also inhibited his effectiveness. Still, he was a favorite with the fans, who would often chant, “Put in Yellow Horse!” when the starting pitcher began to falter. Even after he was gone the chant could still be heard.

There is nothing notable about his big league career other than that he lived the high life, eventually ruining his baseball career and making his life a living hell.

Yellow Horse continued to live high-and drink. He loved being the roommate of Rabbitt Maranville, who had introduced him to the liquor that would become his personal demon. Maranville would eventually end his personal struggle with alcohol, but too late to help Yellow Horse.

Yellow Horse pitched primarily out of the bullpen in 1922, and was out for nearly a month because of tonsillitis. His results were less encouraging: a 4.52 ERA and 92 hits allowed in 77 2/3 innings. The Pirates had evidently seen enough. After the season, they traded him to Sacramento of the Pacific Coast League. Yellow Horse approached several major league clubs, but found no takers. His carousing and drinking problems were noted, and the big league teams passed on him. Back in Pawnee, his tribal members were unhappy about his drinking and he became alienated from them. His drinking was destroying his baseball career and his personal life. He had effectively ended his major league career by sustaining an injury to his arm, possibly as a result of his drinking. Now he was faced with not only losing his baseball career but also his personal dignity.

In 1924 Yellow Horse suffered another serious arm injury. Sacramento traded him to Fort Worth; Fort Worth sent him back to Sacramento. In January of 1926, Sacramento sold Moses to Omaha, where he pitched in his final game on May 1. That was it for his baseball career.

Yellow Horse’s life was in free-fall when he returned to Pawnee. Drinking heavily and drifting from odd job to odd job, he was a lost soul. From 1927 to 1945 Yellow Horse earned just enough to eat and drink. He was lost in his own tribe. His tribal brothers avoided him and talked about him in whispers. Suddenly in 1945 he quit drinking, apparently without any help. Moses Yellow Horse’s redemption took the form of retrieval. He retrieved his dignity by stopping drinking and finding himself gainfully employed in steady work. He retrieved his status with his tribe and became an honored member.

His life changed dramatically when he stopped drinking. He was now able to keep a steady job and in time became a tribal elder. He found steady work, first with the Ponca City farm team and then with the Oklahoma State Highway Department.

Chester Gould, also born on the Pawnee reservation, used Yellow Horse in his Dick Tracy comic strip as the model for a character named YellowPony. YellowPony’s face bore no resemblance to Yellow Horse’s. Nor did his speech, which was “ugh-me-know-you”-guttural English. Yellow Horse actually spoke excellent English from his days in the agency school. The only real similarity between live model and comic strip character was a big, strong physique. Most likely, Gould knowingly perpetuated the stereotypical characteristics of the Indian in presenting YellowPony to help sell his comic strip. Sadly, the general public perceived the Indian as an uneducated if noble savage. In addition, the press also represented Indian ballplayers with an overwhelming physicality.

From 1945 until his death, Yellow Horse lived a clean and respectable life. He became a groundskeeper for the Ponca City ballclub in 1947 and coached an all-Indian baseball team of youngsters who were all full-blooded. He hunted and fished and made decisions as an elder of the tribe.

Moses Yellow Horse died on April 10, 1964. He was 66 years old. His headstone in the Northern Indian Cemetery in Pawnee curiously shows only the years of his birth and death but no dates. His gravesite is tucked away in a far corner of the Indian part of the cemetery separated from the white section by a long row of cedar trees. Yellow Horse never married and had no children. The residents of Pawnee saw to it that he had a proper burial and headstone.

Though Yellow Horse was not a household name, his life in and out of baseball raises many questions and opens many wounds about the relationship between Euro-Americans and Native Americans, now strangers in their own land and forced to assimilate themselves without benefits. For example, when Euro-Americans were celebrating the prosperity of the 1920s, Native Americans still on the reservations did not participate in the fruits of that prosperity. In effect they were not permitted to participate by the very absence of laws concerning them. Unlike the black people of that time who were restricted by many Jim Crow laws and knew where they stood, the Indians had no idea where they stood in the broader society. That they went to agency schools and learned Euro-American history and English meant nothing if they could not use their knowledge to participate in society as a whole. When some people pointed out that the Native American was a vanishing race, it was not solely because they did not exist; it was also their unfortunate lot to be ignored.

Yellow Horse redeemed himself after a long bout with alcoholism and became a proud member of the Pawnee tribe. His life could have gone on with continuing alcoholism until it killed him. But instead he alone took his life into his own hands and redeemed himself. Deciding he was going in a direction that would only lead to self-destruction, Yellow Horse made an abrupt but healthy u-turn. He rose above the lack of opportunities presented to him by the larger society and found his niche in his native heritage.