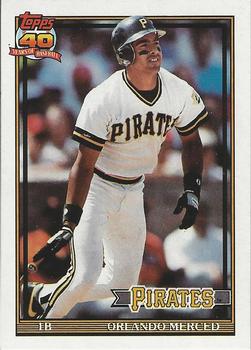 Of the many talented players involved in the successes of the early 1990s pennants won by the Pittsburgh Pirates, one player who flew under the radar was amateur free-agent signing Orlando Merced. Orlando Luis Villanueva Merced was born on November 2, 1966, to José R. and Sylvia Villanueva. Merced’s parents were both originally from Puerto Rico, José from Yabucoa and Sylvia from Humacao, but later settled on the US mainland. José spent his early life in the military, then worked for the US Postal Service, and Sylvia was a professor at New York University. While they were still in Puerto Rico, Orlando caught the eye of Pittsburgh scout Howie Haak while at University Garden High School in San Juan.

Raised alongside the three sons of Hall of Famer and national hero Roberto Clemente, Orlando grew up a Pirates fan. At 18, having been passed over by scouts, Orlando decided to give up baseball and go to college. But one day in 1985 one of Clemente’s sons, Luis, invited Orlando to the Clementes’ house, where Luis was to sign a contract with the Pirates. While he was there a family friend, Victor Henriquez, urged Haak to also sign Orlando. Haak held a one-man tryout for Merced and did sign him.1

Merced and Luis Clemente were both assigned to the rookie-level Gulf Coast League. Playing mostly third base and shortstop, he hit .228 in 40 games. His fielding was woeful at shortstop; 22 errors in 19 games at the position. Nonetheless, the Pirates had sufficient faith in him to keep him in the system. (Luis Clemente, meanwhile, left Organized Baseball after one season.) In 1986 Merced played 92 games at Class-A Watertown (New York-Penn League) Macon (South Atlantic League).He continued to struggle at the plate, with a combined .191 average. Third base was also a struggle, and he played some games at first base and in the outfield,

Merced was plagued by injuries in 1987 and had only 19 plate appearances at Watertown and Macon. Eager to get back on the field in 1988, Merced batted.283 with 8 home runs and 15 stolen bases at Class-A Augusta (South Atlantic League) and Salem (Carolina League). He started the 1989 season with Double-A Harrisburg and late in the season was promoted to Triple-A Buffalo. In 129 at-bats for the Bisons Merced impressed with a .341 batting average and a .372 on-base percentage. He concentrated on hitting to all fields and relied less on pulling the ball. Merced spent most of 1990 with Buffalo, batting.262 with 9 home runs, 55 RBIs, and 14 stolen bases. At manager Terry Collins’s recommendation, the Pirates called Merced up in late June and he played in 25 games for the team as a pinch-hitter and late-innings fill-in. In his major-league debut, Merced got a pinch-hit double off the Philadelphia Phillies’ Ken Howell on June 27.

In 1991 the switch-hitting outfielder-first baseman played in 120 Pirates games, batted .275 and finished second to Jeff Bagwell in the National League Rookie of the Year voting. Merced was a disciplined hitter, demonstrated by his career .355 on-base percentage, and had a strong arm in the outfield, shown by his 65 career outfield assists. Merced’s most intriguing skill, however, was his knack for performing well under pressure, with a career .300 batting average in high-leverage situations.

After playing every infield and outfield position in the minors, Merced found an opening at first base with the Pirates in 1991, after the incumbent, Sid Bream became a free agent after the 1990 season. Merced missed the final seven games of the 1991 season after spraining a ligament in his right foot.

After not starting a game since September 26, on October 12 Merced led off Game Three of the National League Championship Series against the Atlanta Braves with a home run off future Hall of Famer John Smoltz. At the time, only three players had homered to lead off a playoff game (Bert Campaneris in 1973, George Brett in 1978, and Bob Dernier in 1984). Pittsburgh fell to the Braves, the second of three straight years the Pirates lost the NLCS.

Merced’s performance fell off in 1992, his second season with the Pirates; his batting average fell to .247, with 6 home runs and 60 RBIs. After the season, several Pirates who had helped orchestrate the successes of the previous few years departed, notably Barry Bonds and Doug Drabek. This thrust the young Merced into a more demanding role, and he rose to the occasion, batting .313 with 8 home runs, 70 RBIs, a career-high OPS (on base percentage plus slugging percentage) of .857. Merced’s success didn’t translate to enough wins as Pittsburgh finished fifth in the National League East and missed the playoffs for the first time in four years.

Pittsburgh missed the postseason for the remainder of Merced’s tenure with the team. During his seven seasons with the Pirates he hit 65 home runs, with 394 RBIs. In 1996, his last season with Pittsburgh, Merced batted .287 and had one of his best slugging seasons, with 17 home runs and 80 runs batted in. Nevertheless, after the season the Pirates sent Merced to the Toronto Blue Jays in a nine-player deal. By this time Merced had shown his defensive abilities and arm strength in right field, and started the season as the Blue Jays’ everyday right fielder.

Merced joined a formidable offense in Toronto that included fellow Puerto Ricans Carlos Delgado, Benito Santiago, and Jose Cruz. Merced posted decent numbers in Toronto, with 9 home runs, an above-average on-base percentage (.352), and continuing to play a formidable right field. Toronto missed the playoffs, and Merced, now 30 years old, decided to test the free-agent market. Though his production was respectable, he went into free agency with a .266 batting average for the season and the fewest RBIs and hits in his career. Teams must have assumed he was on the decline. Merced had been paid $2.7 million in each of his past two years, but after nearly three months on the market, he signed a one-year contract with the Minnesota Twins for $800,000. Merced played only 63 games with the Twins in 1998, posting a .289 batting average before being dealt to the Boston Red Sox on July 31 in a five-player trade.

The 1998 Red Sox were postseason-bound but Merced had few opportunities to perform; on September 1, the Red Sox released him. He wasn’t unemployed long. Four days later the Chicago Cubs picked up his contract. In 10 at-bats with the Cubs, Merced hit .300 with a three-run home run. With the Cubs, Merced again found himself playing for a team that was eliminated in the playoffs by the Atlanta Braves. Merced did not see any playing time in the playoffs and the Cubs were defeated in a three-game sweep. On October 28 the Cubs let him go. On February 10, 1999, he signed with the Montreal Expos in a one-year, $560,000 deal that would send him back to Canada.

Once again Merced joined a number of Puerto Rico-born players, including Javier Vasquez and Jose Vidro. At 32 Merced became a part-time player, getting into 93 games and batting .268. The tremendous defensive play and throwing arm of Vladimir Guerrero saw Merced pushed over to left field in Montreal for the first time in his career. The Expos finished the season in fourth place in the National League East, missed the playoffs, and on October 15 the team released Merced.

For 2000 Merced signed with the Orix Blue Wave of the Japanese Pacific League, playing in 23 games and at least well enough to warrant a minor-league deal with the Houston Astros in August. Over the rest of the season he played in 17 games for the New Orleans Zephyrs and batted .269.

The 34-year-old Merced’s play and experience warranted him another contract from Houston in 2001. He earned $300,000 in just over 130 at-bats. Houston reached the playoffs in 2001 but was eliminated from contention by the Atlanta Braves. Merced went 0-for-1, fouling out to the catcher in his last postseason at-bat. He returned to Houston the following two seasons on one-year contracts and ended his major-league career in 2003 playing alongside his 1991 rival for the Rookie of the Year Award, Jeff Bagwell. Released by the Astros after the 2003 season, Merced signed a minor-league contract with the Pirates but was released in 2004 spring training. He left the major leagues with a career .277 batting average with 103 home runs.

After life in the majors, Merced took his love for baseball back to Puerto Rico in the 2004 season and continued playing in the Puerto Rican Winter League until 2005. In 2010 he became the hitting coach for the Jamestown Jammers, a Pirates farm team in the rookie-level New York-Penn League.

Merced started his managerial career with the Rojos del Aguila de Veracruz of the Mexican League in 2012 and later that year helped coach the Puerto Rican National team in the World Baseball Classic. As of 2017, Merced remained involved in baseball and was hitting coach of the Billings Mustangs, the Cincinnati Reds’ rookie league team. When away from baseball, Merced spends time with his four children who live with their mother in Missouri. Merced’s son, Rob, is a football standout at Kickapoo High School, well known for preparing young athletes for college football.

Thanks to Edwin Fernandez for information on Merced’s family background.