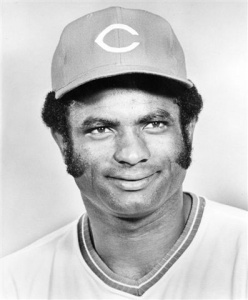 Given the offensive firepower of the Big Red Machine, it is quite easy to overlook the contributions of the pitching staff to the franchise’s success and its two World Series banners. Clearly, a run-scoring powerhouse that featured talents like Johnny Bench, Pete Rose, Joe Morgan, and Tony Perez often simply pummeled divisional, National League, and World Series opponents into submission. Still, it is also necessary to highlight the contributions of players like Don Gullett, Gary Nolan, Jack Billingham, Clay Carroll, Tom Hall, and others who served at the pleasure/behest of manager George “Sparky” Anderson (also known as Captain Hook), a man who never shied away from bringing in a reliever or juggling a starting rotation. One of the key members of this staff during the glory years of the 1970s, indeed one of the best relievers in all of baseball during this era, was a proud, intense, and very often temperamental Dominican named Pedro Borbon.

Pedro Borbon Rodriguez was born on December 2, 1946, in the town of Mao in what is now known as Valverde Province (it was part of Santiago Province until 1958), Dominican Republic. Sources on Borbon’s life provide little information that details his schooling, though some indicated that he never attended high school. Given the economic and social circumstances of Dominican society during this era, it is possible that Pedro received only a scant formal education. What he always possessed, however, was a fiery and competitive disposition, and this was manifested in part by his love for cockfighting from a young age. Borbon has also indicated that he did not play baseball in his youth until he was about 16. Given the ubiquity of the sport in the Dominican Republic, this tale seems a bit far-fetched (though very much in keeping with his character).

Borbon claimed that he initially played catcher until he was struck in the head by a bat as he reached for a pitch. This settled matters in his mind, and Pedro quickly made the switch to the mound, where he felt he would be safer (and could take greater advantage of his strong and resilient arm). In mid-October 1964, at the age of 17, he signed with the St. Louis Cardinals, and was shipped off to his first farm system assignment, in Cedar Rapids, Iowa (Midwest League), for the 1966 campaign.

Borbon spent three years in the Cardinals system and pitched quite well: 6-1, 1.96 for Cedar Rapids; 5-4, 2.29 for St. Petersburg (Florida State League), and 8-5, 2.34 for Modesto (California League). Used almost solely as a relief pitcher (just three starts in the three seasons), he had still not advanced beyond Single-A ball after his third season, 1968. When he was not placed on the Cardinals’ 40-man roster after that season, he became eligible for the Rule 5 draft and was selected by the California Angels. In order to protect him, the Angels had to keep Borbon in the major leagues for the entire 1969 season.

Borbon made his major-league debut on April 9, 1969, against the Seattle Pilots, pitching three shutout innings in relief of starter Andy Messersmith and earning an impressive victory. But his promising start was an aberration, as he pitched in just 22 games for the Angels, and finished 2-3 with a 6.15 ERA. While the Angels believed a “sore arm” was to blame, he was included in a big trade they made in November with the Reds; Borbon moved to Cincinnati with pitchers Jim McGlothlin and Vern Geishert in exchange for outfielder Alex Johnson and infielder Chico Ruiz. The Reds needed starting pitching, and coveted the 26-year-old McGlothlin. Borbon was a minor part of the deal.1

Borbon did not make a positive first impression with his new ballclub, as he was involved in what Commissioner Bowie Kuhn considered an “inexcusable and intolerable” act during a game in the Dominican Winter League in December. Borbon was fined severely by Major League Baseball as a result of two confrontations with umpires. Initially, he was fined $50 and suspended for three Winter League games, but Kuhn felt this was not sufficient. In February 1970 the commissioner raised the fine to $500 and suspended Borbon (and Rico Carty as well) for the following winter season. This was the first of several incidents in which Borbon’s fiery temper tarnished his reputation with his MLB colleagues and officials.2

During the 1970 summer season, the young Dominican fireballer spent most of his time with Indianapolis of the Triple-A American Association, where he finished 5-2 with a 3.30 ERA. He made it to Cincinnati for several weeks in midsummer, but had a 0-2 record and a 6.75 ERA. The Reds breezed to the division title and the National League pennant, but Borbon played no part in the postseason festivities. He was later granted permission to return to play in the Dominican Winter League, toiling on the mound for Licey.3

The 1972 campaign saw Borbon’s breakthrough for the Reds, and he produced excellent and flexible relief work the entire season. In one two-week stretch starting in late June, during which the Reds won 13 of 14 games, Pedro made five relief appearances, for a total of 14⅓ innings, yielding only one run and six hits while earning four saves and one win. “He can throw, and throw and throw,” Anderson crowed. “Even when I don’t plan to use him, he wants to throw in the bullpen.” Coach Ted Kluszewski considered Borbon to possess a “million-dollar arm.” For the season, the young Dominican finished 8-3 with a 3.17 ERA in 62 games and 122 innings, while the Reds went all the way to the seventh game of the World Series before falling to the Oakland Athletics. Borbon pitched nine times in the postseason; his only poor performance was in Game Seven of the Series, as he gave up the deciding runs to the A’s and took the loss.4

While 1973 was in many ways the best year of Borbon’s career on the mound (11-4, 2.16 ERA in 80 games and 121 innings), it was also the year in which he became involved in a fracas that helped cement his reputation as a hot-tempered player, all too willing to be involved in fisticuffs. On October 8, with the Reds playing the Mets during Game Three of the NLCS, Pete Rose and New York shortstop Bud Harrelson became embroiled in a fight after Rose’s hard slide into second base. As a result of the ensuing wrestling match, both benches cleared. At the end of the fracas Borbon retrieved what he believed to be was his cap from the Shea Stadium turf. When he realized it was actually a Mets hat, he took a bite out of the offending article. Similar incidents occurred later on in Borbon’s career (a fistfight with teammate Cesar Geronimo in the Reds clubhouse, an altercation with Pirates pitcher Daryl Patterson in which Borbon bit his protagonist, and some run-ins at Cincinnati nightspots).5 Through it all, Borbon continued to pitch consistently excellent and durable baseball. In the 1973 NLCS, Borbon won Game One and saved Game Four, but the Reds fell to the Mets in five games.

The next four years were remarkably similar for Borbon. In fact, for the six-year period beginning in 1972, Borbon put up a 52-27 record, with a 3.06 ERA and 70 saves, averaging 71 appearances and 126 innings per season. Of course, the Reds were one of history’s greatest teams in this period, winning four division titles and two World Series. In the victorious 1975 and 1976 postseasons, Borbon pitched in seven games. In his career he hurled in 20 postseason games, finishing with a win, three saves, and a 2.42 ERA.

Eventually the Reds dynasty faded away. The 31-year-old Borbon had an 8-2 record in 1978 but his 4.98 ERA was a better indicator of his struggles. After he started 2-2, 3.43 in 1979, on June 28 the Reds dealt their veteran reliever to the Giants in exchange for utilityman Hector Cruz. His first two appearances for San Francisco came against his old club—he earned a victory against the Reds on June 29 and picked up a save on July 1. Overall, however, the Reds were likely correct in their assessment that Borbon was no longer the pitcher he had been. He finished 4-3 for the Giants, but his ERA was 4.89. After he was released just before the 1980 season, Borbon signed with the Cardinals at the end of April but was let go after only 19 innings pitched with an ERA of 3.79, giving up a home run in each of his last three appearances. His final game in the major leagues was on May 25, 1980. The following spring, he was toiling for Monterrey in the Mexican League.6

Borbon was married to Griselda Ventura and they had three children, Pedro Jr., Harold, and Miguel. Pedro Jr. (born November 15, 1967, in Mao), followed in his father’s footsteps and pitched in the major leagues between 1992 and 2003; the high point of his career came in 1995 when his Atlanta Braves won the World Series. When the young Pedro was a teen, his parents divorced and his relationship with his father became strained. “After the divorce, my dad was … mentally messed up. He felt like a failure. So he kind of disappeared from my life,” he told a reporter in 1995. Pedro Jr. eventually moved to New York City to live with relatives, and he became a standout pitcher at DeWitt Clinton High School and later at Ranger Junior College in Ranger, Texas. Father and son did not see each other on a regular basis for many years, and the younger Borbon noted in a 1999 interview that the relationship was still a work in progress: “We talk every four or five months. There’s a lot of fuel there. We don’t want to put a match to it because it’ll explode. So we talk like we just talked yesterday.”7

Although Borbon’s career was often marred by incidents of violence and poor judgment, his time in the Cincinnati bullpen was marked by much success as he became the “go-to” reliever for one of the best teams in baseball history. After retiring from the major leagues Borbon continued to pitch in various minor and semipro leagues in Latin America and the US. In 2011 he resided in Pharr, Texas, just across the border from Reynosa, Mexico, along with his second wife. The Reds in 2010 inducted him into their Hall of Fame in recognition of his contributions to the Big Red Machine.

Pedro Borbon died, at age 65, on June 4, 2012, at his home in Pharr. He had been battling cancer. Among the many tributes from former teammates, Tony Perez recalled, “I always enjoyed his company on and off the field. He was a great guy.”8