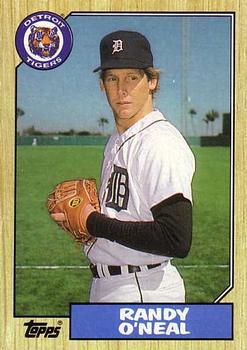 In January 1987, the Tigers traded O’Neal, with pitcher Chuck Cary, to the Atlanta Braves for minor-leaguer Freddy Tiburcio — who never did make it to the bigs — and outfielder-designated hitter Terry Harper. O’Neal had four wins and two losses for the Braves and one loss for their International League affiliate in Richmond. The Braves sent him to the St. Louis Cardinals that July for relief pitcher Joe Boever, who made his way to Detroit in 1993. O’Neal got minimal work with the Cardinals, pitching in one game, a start, with no decision and a 1.80 ERA in 1987, and going 2-3 with a 4.58 ERA in 10 games (eight starts) in 1988. The Cardinals more often kept O’Neal in Louisville, where he was 3-1 for the Redbirds in 1987 and 3-5 in 1988. In October he was granted free agency, and he signed with the Philadelphia Phillies in December. After he appeared in 20 games (starting only one of these) with Philadelphia, going 0-1 with a 6.23 ERA, the Phils sent him to Triple-A Scranton/Wilkes-Barre, and he was 4-4 with the Red Barons in 1989. Despite an improved 2.53 ERA, the best of his career, the Phillies released him at the end of the season.

Along the way O’Neal tore his labrum and his rotator cuff and had surgery. Then he reinjured his shoulder. He continued to “play for the love of the game and the chance to compete and get back to the big leagues.” He pitched in the Kansas City Royals’ system for the Double-A Memphis Chicks in 1991, his last year in Organized Baseball, with only one win against four losses.

This biography is included in “Detroit Tigers 1984: What A Start! What A Finish!” (SABR, 2012), edited by Mark Pattison and David Raglin.