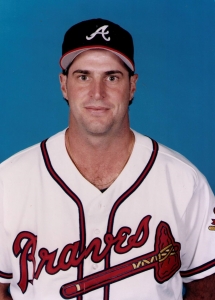 Rodney Lea Nichols was born on December 29, 1964, in Burlington, Iowa. His family relocated to Albuquerque, New Mexico when Rod was about three years old, but he has always remained an Iowan at heart. Nichols early on adopted Iowa as one of his favorite college teams. “Back in the day, if you got the Hawkeyes on TV, you watched them,” says Rod. Growing up in New Mexico, if there was a chance to see a game, I did.”1

Nichols grew up in Albuquerque, where he managed to snag a job as batboy for the Albuquerque Dukes, the Triple-A farm team of the Los Angeles Dodgers, after his freshman and sophomore years in high school (1978 and 1979). According to Rod, “That’s when I decided I wanted a career in professional baseball.”2

Nichols started attracting attention early, as a standout right-handed pitcher on the Highland High School team, before moving on to three years at the University of New Mexico, 1983-85.

Nichols led the Lobos in wins (6) and ERA (3.93) in 1984, and in 1985 he was selected in the fifth round of the amateur draft by the Cleveland Indians.3 He was the only one of five teammates drafted that year to play in the major leagues, and one of the 14 former Lobos to make the major leagues overall. Including Nichols, seven players drafted in the fifth round that year made the majors. Some other players of note selected in the 1985 draft were B.J. Surhoff, Will Clark, Bobby Witt, Barry Bonds, and Rafael Palmeiro.

After being drafted, Nichols spent three seasons as a starting pitcher in the minors with stops in Class-A Batavia, Waterloo, and Williamsport prior to being called up to the major leagues. His progress was slowed by a shoulder injury that required surgery in 1986.4 Nichols, possessing a slow curve and a Luis Tiant-esque twisting windup, became known within the Cleveland organization when, after a rough inning with Batavia, he flushed his glove down the clubhouse toilet.5 He was called up in 1989 to replace pitcher Bud Black, who had been placed on the disabled list with an arm injury.6 The decision to promote Nichols may have been helped by the five scoreless innings he pitched during the only Colorado Springs Sky Sox game Cleveland Indians President Hank Peters attended that season.7

After starting the season in Triple A with the Pacific Coast League’s Colorado Springs Sky Sox, and despite a 2-6 record with a 5.68 earned-run average, Nichols made his debut for the Indians in Cleveland on July 30, 1988, against the Minnesota Twins, pitching seven innings and allowing three earned runs on five hits and striking out five, taking the loss in a seven-inning game shortened by weather. He found himself in an early hole after giving up a three-run home run to the Twins’ Gary Gaetti in the first inning, but he settled down and after the game said, “I was nervous when I walked the first batter of the game, but I was all right after the home run. It was like a big burden had been lifted. It was a weird feeling.”8 Manager Doc Edwards said, “He pitched well. He hit a few 88s and his fastball stayed between 85-87 miles per hour most of the time.”9

Nichols pitched in 10 more games in his rookie year, which he split with stints with Colorado Springs and Kinston of the Class-A Carolina League. With the Indians he made nine more starts and finished with a record of 1-7 and a 5.06 ERA in 69⅓ innings pitched.

Nichols earned his first major-league win against the New York Yankees pitching in Yankee Stadium on September 7 and going 6⅓ innings, allowing four earned runs and striking out four. After pitching and getting the win in Yankee Stadium, Nichols said, “This is everybody’s dream come true as a kid.”10 In another rookie-year highlight, Nichols lost 1-0 to the Toronto Blue Jays in Cleveland on September 24, pitching a complete game. In his last three starts in 1988, the Indians were shut out in all three games. After the season Nichols pitched winter ball in the Dominican Republic.11

In the 1989 season, also split with Colorado Springs, Nichols pitched in 15 games for the Indians, making 11 starts and finishing with a 4-6 record and a 4.40 ERA in 71⅔ innings. The season was highlighted by a three-start winning streak; he won on July 28 at home against the Boston Red Sox, on August 3 against the Red Sox at Fenway Park, and on August 9 against the Yankees at Yankee Stadium. In a victory over the Detroit Tigers on September 14 in Cleveland, Nichols went eight innings and struck out a season-high 10 batters.

Nichols spent the entire 1991 season as a starter and reliever with Cleveland. He went 2-11 but had a solid 3.54 ERA in 137 innings. Nichols picked up his only career save in a scoreless four-inning relief appearance on June 19 against the Chicago White Sox. His two victories were a 2-1 complete-game win against the Oakland Athletics in Oakland on July 17 and a 3-0 shutout of the Chicago White Sox on August 25 in Cleveland.

In 1992 Nichols again split time between the Indians and Colorado Springs, starting nine games and relieving in 21 others. His record was 4-3 with a 4.53 ERA in 105⅓ innings.

Nichols became a free agent on December 19, 1992, and signed with the Los Angeles Dodgers for the 1993 season. He pitched in only four games for the Dodgers (0-1, 5.68); he spent most of the season in the Pacific Coast League with the Albuquerque Dukes, where he won eight games and lost five.

Released after the season, Nichols signed with the Kansas City Royals but spent the entire 1994 season in Triple A with the American Association’s Omaha Royals, compiling a 5-10 record and a 5.64 earned-run average. In 1995 Nichols admitted that he was “bad” in 1994 and “didn’t deserve a chance” to return to the majors.12

Again a free agent, Nichols signed with the Braves for the 1995 season. He spent all but two weeks with the Triple-A Richmond Braves. He was called up in August after the team traded Mike Stanton to the Red Sox and needed a reliever.13 He made five pitching appearances for the Braves, giving up 14 hits in 6⅔ innings. Before being called up, Nichols was leading the International League with 24 saves and ended up making the International League All-Star team as a reliever.14 He was returned to Richmond on August 29. Despite his success that season in Triple-A — when he was called up general manager John Scheurholz decribed him as “a machine” — Nichols was unable to duplicate it at the major-league level. After learning he was being demoted, a disappointed but appreciative Nichols said, “Like I told Bobby (Cox), I appreciate the opportunity. I’ve got no complaints. I’m just sorry things didn’t work out. I’m bummed. I wanted to stay around.”15

After spending the entire 1996 season in Triple A with Richmond, Nichols signed with the Fukuoka Daiei Hawks of the Japanese Pacific League, where he made just three appearances in 1997, for a total of three innings, ending his playing career.

After a few years off, Nichols joined the Philadelphia Phillies as a minor-league pitching coach in 2000, spending the next 13 seasons with the Piedmont Boll Weevils, Lakewood BlueClaws, Reading Phillies, Scranton-Wilkes Barre Red Barons, Ottawa Lynx, and the Lehigh Valley IronPigs, before getting back to the major leagues as the Phillies’ bullpen coach, 2013-15. Rod then joined the Chicago Cubs organization and spent the 2016-19 seasons as the pitching coach of their Triple-A team — back “home” in Iowa.16

Rod currently lives with his wife, Sharon, and family in Helena, Montana. Their son, Chris, was drafted by the Phillies in 2012, and pitched in their farm system for two seasons.17

In addition to the sources cited in the Notes, the author consulted Baseball-Reference.com and Baseball-Almanac.