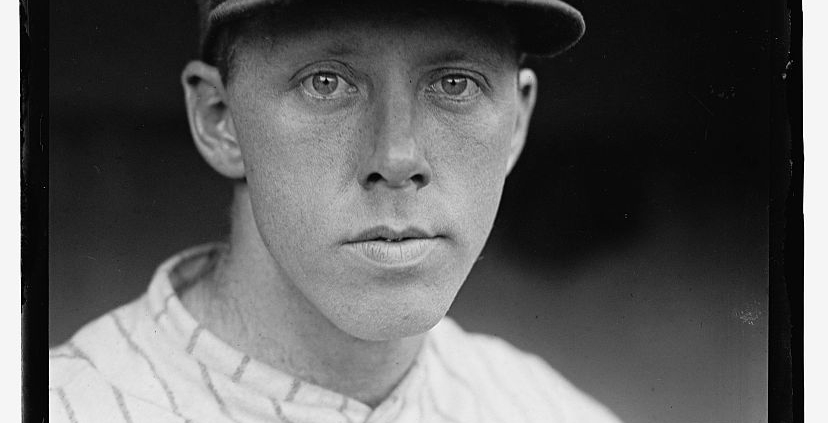 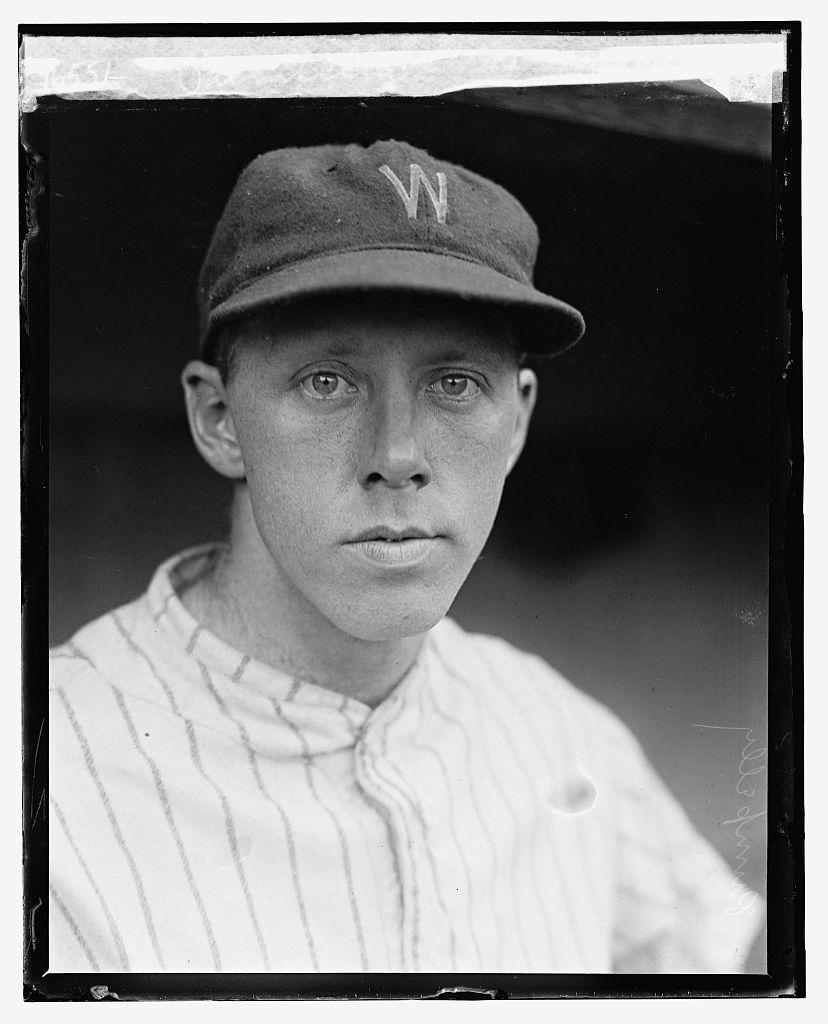 Appearing in just one inning of one major league game in 1925 fresh from the semipro ranks, pitcher Spencer Pumpelly has gained a measure of mystique on the SABR Biographical Research Committee’s Top 20 List as the most recent player for whom knowledge of which side of the plate he batted from is lacking.

Spencer Armstrong Pumpelly was born on April 11, 1893, in Owego, New York, an upstate town twenty miles west of Binghamton and ten miles north of the Pennsylvania border. He was the younger of two sons of Gurdon and Kia Pumpelly, both members of notable families in nineteenth century Owego.

The Pumpelly family, which settled in Owego in the early 1800s, was prosperous, its wealth stemming from Owego’s position as a transportation hub; where goods from the Lake Cayuga region were shipped down the Susquehanna River and then later by railroad. By the late 1880s, Gurdon Pumpelly was a wholesale leaf tobacco dealer and the family lived on a farm on the south side of the Susquehanna River. His wife, Kia, was the daughter of the local doctor. By 1910, Gurdon was retired and the family lived in town at 44 Front Street with two live-in servants.

Gurdon Pumpelly was the nephew of two prominent Owego citizens, George Pumpelly and Frederick Hewitt. In 1908 after Hewitt died, Gurdon Pumpelly was executor of his will, which called for the disbursal of $5 million to various charities with $500,000 to Yale University, his alma mater, and bequeathed $40,000 to Gurdon.

Although there is nobody named Pumpelly living in present-day Owego, or in New York State for that matter, the Pumpelly name lives on in Owego. The residence at 44 Front Street is now the Pumpelly House Bed & Breakfast, which the Tioga County Tourism Board touts as having “the elegant antique Victorian atmosphere of yesterday.” Half a mile west down the Susquehanna River is a tributary called Pumpelly Creek.

Yale was a popular educational destination for wealthy Owego citizens, and several members of the Pumpelly family attended Yale, including Thomas Platt, who became a U.S. senator and an influential politician in New York. The Hewitt inheritance and gift to Yale paved the way for both Pumpelly brothers to attend Yale. Spencer attended the Hotchkiss School, a prep school in northwestern Connecticut, before journeying to New Haven for his freshman year at Yale in the fall of 1913. His older brother, Harold, was already an athletic star at Yale when Spencer arrived, based on his exploits on the football gridiron (Third Team Walter Camp All-American in 1912).

Spencer made his varsity baseball debut for Yale as a sophomore in the spring of 1915 (freshman couldn’t play varsity in those days). Pumpelly pitched in at least half a dozen games in 1915, defeating Georgetown, Lafayette, Cornell, and Pennsylvania while losing close games to Dartmouth (5-4) and Cornell (1-0). Despite his commendable won-loss record, Pumpelly had control problems as a pitcher, usually walking as many batters as he struck out. In the Lafayette game on May 6, Pumpelly walked eight, struck out six, yielded eight hits, and escaped with a 5-2 victory as Lafayette stranded fourteen baserunners.

Pumpelly was also subject to lapses in concentration after pitching well. After the Pennsylvania game, in which Pumpelly also walked eight batters, the New York Times reported, “Pumpelly’s lapse in the fourth allowed Murdock to walk, Irwin to single, and Matchett to smash the longest home run ever seen at Yale.” After a game against Cornell, the Times headline said it all: “Bases on Balls Beat Yale Nine; Pitcher Pumpelly’s Wildness in Tenth Forces in Cornell’s Only Run.” After yielding just one walk in the first nine innings, Pumpelly loaded the bases in the tenth with two walks and his own throwing error on an attempted sacrifice bunt; he then walked in the winning run. Making matters worse for Pumpelly were no doubt the many friends and family in attendance that day for the game in Ithaca, New York, just twenty-five miles from his Owego hometown.

He apparently suffered arm troubles, as he didn’t pitch for Yale after a June 5 game, missing a Princeton game at the Polo Grounds and a three-game series with Harvard, one game played before 15,000 at Yale and another at Ebbets Field.

The June 5, 1915, game was Pumpelly’s last on-field appearance in a Yale uniform, as four months later he was declared ineligible to play athletics at the institution because of a rules violation. During the summer, Pumpelly, along with four other Yale varsity baseball players, played on a Long Island summer league team but made the mistake of accepting free room and board from a team benefactor. In an October 18 letter, Pumpelly and the four other athletes acknowledged their ineligibility:

“We, the undersigned members of the Yale University baseball team of 1915 during the past Summer played with the Quogue Field Club nine, the club furnishing the board and room to the players. From the time we discovered the provision in the Yale rules that no man who has received board for playing Summer baseball shall represent Yale on its teams, each of us paid in full for board and lodging subsequently furnished him by the club. In view, however, of the fact that we did, although unintentionally and ill-advisedly, violate the rule, we hereby withdraw from competition in intercollegiate athletics.”

An appeal of their case to the Executive Committee of the Yale Athletic Association upheld the ineligibility ruling, although the committee seemed to offer a slight concession that the ineligibility was just for one academic year. Nevertheless, Pumpelly did not return to the baseball team during his senior year, 1917. He did play some semipro baseball in 1916, as his name pops up in line scores of the New Haven Colonials in the team’s exhibition games with the New York Giants and Brooklyn.

Pumpelly then virtually disappeared from the baseball landscape until he suddenly reappeared nearly ten years later in 1925 to pitch for the Washington Senators. A diligent search by SABR member Marc Okkonen couldn’t locate Pumpelly’s name on a reserve list of any minor league team before 1925. Between his 1917 Yale graduation (and his naval service in World War I) and his brief stint with the Senators in 1925, Pumpelly must have played some semipro baseball. The 1920 U.S. Census indicates that Pumpelly and his brother were both back in Owego, making their living as cigar manufacturers.

Perhaps due to some influential contacts with Washington owner Clark Griffith, Pumpelly was given a tryout with the Senators during the summer of 1925. For an unheralded semipro player, Pumpelly received quite a bit of ink in the Washington Post.

In a June 24 article headlined “Yale Hurler Impresses Harris,” the Post proclaimed, “Pumpelly is a right-hander of considerable experience. He made quite a reputation for himself for the Elis several years ago and had gotten a trial with Ty Cobb‘s Bengals. Since then he has met with success in semipro ranks with some of the strong teams around New York and as a member of the Colonials of New Haven.” The next day, the paper gushed, “Pumpelly has plenty of speed, good curves, fairly good control and, above all, apparently knows how to mix them up to the best advantage. … Manager Harris was enthusiastic over his chances of making good.”

With several Washington pitchers injured in early July, Washington signed Pumpelly on July 5. Manager Bucky Harris gave Pumpelly his first shot on the mound in a July 6 exhibition game in Pittsburgh between the Nats and the Pittsburgh Pirates. In an article subheadlined “Spencer Pumpelly Gets First Chance on Hurling Hill,” the Post reported that “the former Yale pitcher turned in a fine effort, allowing but four hits in as many frames” while yielding one earned run. In that game, Pumpelly would have batted at least once in a Washington uniform, since he pitched four innings, but no record remains of which side of the plate he took his swings from in that game.

A week later, on July 12, Pumpelly made his sole major league appearance, in the sixth inning of Washington’s game with the St. Louis Browns at Sportsman’s Park in St. Louis. “Pumpelly was given a chance to see what he could do in the sixth and McManus greeted him with a home run clout to the scoreboard in left field. He walked the next man and then pulled out of the inning with no further damage being done to his slants,” the Post reported. Pumpelly left the game when Harris sent up a pinch-hitter for him in the top of the seventh inning. Washington gave Pumpelly his ten-day notice of release the next day.

Washington went on to win the American League pennant in 1925, meeting Pittsburgh in the World Series, a matchup previewed in that July exhibition game that Pumpelly pitched in. When Washington divided up its loser’s shares after the World Series, Pumpelly did not receive consideration for a cut of the proceeds.

Pumpelly seems to have been a free spirit, from what little can be reconstructed of his life. An article in the May 20, 1916, issue of the New York Times, “A Yale Tradition Shattered,” noted that Pumpelly thumbed his nose at one of Yale’s most treasured traditions, admission to one of its senior clubs. “In refusing to appear on the Yale campus during the annual ‘tap day’ exercises yesterday, thereby forfeiting his opportunity of being chosen to one of the senior societies, Spencer Pumpelly of Owego, N.Y., broke all Yale traditions. Heretofore, every member of the junior class who considered himself a possibility for election to Skull and Bones, Scroll and Key, or Wolf’s Head has been careful to be on the campus until the last man was tapped. Pumpelly jumped into his automobile and spent the afternoon riding.”

By the time of the 10th anniversary report of the Class of 1917, Yale had already lost contact with Pumpelly. “The only information that we have received about him since then [the war] is to the effect that he has been playing semiprofessional baseball. So far as our records show, he is unmarried,” the 1928 class report told classmates, many of whom were already compiling impressive resumes.

An online 1997 article describing a log cabin available for rental in Owego notes that Spencer Pumpelly, while hunting in the 1930s, discovered a log cabin built in 1815. “Pumpelly paid $25 for it and removed it piece by piece. He rebuilt the cabin at its present location on the south side of the Susquehanna River. … It took Pumpelly four years to take the cabin apart and rebuild it. Each of the pieces were carefully numbered so they could be replaced in the correct places.” (“182 Year Old Cabin Open to the Public,” <communitypress.crosswinds.net/1997/03-97/cabin.htm>)

Such a free-spirit attitude may also have been passed down to a present-day race car driver named Spencer Pumpelly.

Pumpelly died at the age of 80, on December 5, 1973, in Sayre, Pennsylvania, just across the New York border and about fifteen miles from Owego.

Yale University archives, History of the Class of 1917.