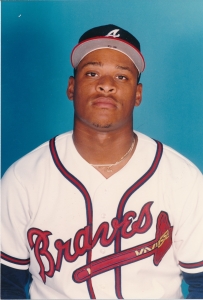 The 1991 Atlanta Braves were a team on the rise. Despite, or perhaps as a result of, their moribund performance in the late 1980s, when the team won no more than 72 games in a season and finished no higher than fifth place in the National League West Division, owner Ted Turner overhauled the club’s leadership. Notably, he brought in a new general manager, John Schuerholz, who in turn invigorated the organization’s scouting enterprise. One of his ascendant scouts, Roy Clark, was empowered to conduct regional tryout camps in hopes of unearthing a few promising nuggets of talent. In one of these camps, Clark discovered an 18-year-old left-handed pitcher with only two years of high school baseball experience, Terrell Wade.

In a plot line seemingly plucked from Clint Eastwood’s film Trouble with the Curve, in which a lucky scout finds a talented gem in the backwoods of North Carolina, Wade went on to star in the Braves’ minor-league system. After several years climbing the minor-league ziggurat, he reached the major leagues in 1995, when he made three appearances for the eventual World Series champions. Wade pitched in the major leagues for three more injury-plagued seasons, and in the minors until 2006, but it was his brief cup of coffee with the 1995 team that netted him a championship ring and a small niche in Atlanta Braves history.

Hawatha Terrell Wade was born on January 25, 1973, in tiny Rembert, South Carolina, the second child of Horace and Francis Mae Wade.1 Wade’s father owned a store near Rembert for a while, but generally earned his living by doing odd jobs throughout the region. Terrell had an older brother, Sherman, and younger siblings, brother Travis and sister Shemikia.2 Always an athlete, Wade grew up loving basketball and swimming,3 as well as baseball, the sport at which he truly excelled.

Rembert is a small community near the city of Sumter, and not far from the South Carolina state capital, Columbia, but did not have its own school district. Wade attended Hillcrest High School, but played baseball only in his senior season. According to Hillcrest teammate Brian Benenhaley, “He was a really good athlete. (He) only played baseball in high school one year. His fastball sat around 82-83.”4 According to Benenhaley, the team was not very talented, but Wade “made the team competitive when he pitched.”5 Despite pitching a two-hitter against the much larger Sumter High school, Rell, as he was called by his classmates, was not scouted by any professional team. After graduation, in May 1991, though, the left-hander decided to take his shot.

“I had taken two courses in masonry, and that’s what I was going to do,” Wade said in discussing why he decided to attend a Braves tryout camp in Sumter.6 He had played American Legion ball in 1991, in addition to high school, and his coach “told me that I should go out there because I had everything to gain.”7 Wade, by then a 6-foot-3 a lefty with a fastball that had accelerated to the 92-93 MPH range, immediately snared the eye of Roy Clark. Chuck LaMar, then the Braves’ director of scouting and player personnel, said in 1994, “I think our scout Roy called me from a pay phone. He said, ‘I have a young man we need to sign immediately.’”8 LaMar further reflected: “Roy Clark covers the Carolinas for us and covers it as good as any scout in baseball and yet he missed him (at first). So we’re not patting ourselves on the back. These (tryout-camp discovery) stories are getting fewer and fewer. But they still happen, and it shows what an inexact science judging talent can be.”9

Unmarried when he signed, Wade did have a four-month-old daughter, Tyresse Chantal. So the $5,000 signing bonus was an immediate paycheck. The pitcher did not disappoint his new team, going 2-0 and striking out 22 with the Braves’ Rookie Gulf Coast League squad in Bradenton, Florida. He spent the next year, 1992, in Idaho Falls of the Rookie Pioneer League, where he managed an ERA of only 6.44, but still whiffed 54 batters in 50⅓ innings. That potential earned him a promotion to Macon in the low Class-A South Atlantic League, for 1993. There, Wade emerged as an elite prospect.

He posted an 8-2 mark with Macon, with a 1.73 ERA and 121 strikeouts in 83⅓ innings. He was the league’s Pitcher of the Week in June (14-20) and Macon Pitcher of the Month in May, and was named the SAL’s top prospect by Baseball America.10 After a midsummer promotion to high Class-A Durham, he was named Carolina League Pitcher of the Week for July 4-10. Wade tossed only 33 innings for the Bulls before being promoted again, this time to Greenville of the Southern League, where he earned his first Double-A victory by throwing a four-hit shutout against Chattanooga on August 12. After the season, Wade received the Phil Niekro Award as the top pitcher in the team’s minor-league system, and — despite having departed in July — was named Macon’s Player of the Year.

Wade married fiancée Frances Regina during the offseason, but the marriage did not last. On the diamond, though, life was easier. Entering the 1994 season, Baseball America made Wade the 29th-ranked prospect in all of baseball, and the fifth-best prospect in the Southern League. With Greenville, he was named the team’s Pitcher of the Month in May, after he posted a 3-1 record with a 3.35 ERA, and was named to the Southern League All-Star game. Wade was promoted to Triple-A Richmond on August 13, and won his International League debut, 6-2, over the Toledo Mud Hens. He was 2-2 in four starts for Richmond. Of note, he had held hitters to a .130 batting average (3-for-23) with runners in scoring position.11 He was invited to major-league spring training in 1995.

On May 1, 1995, Wade reported back to Richmond as Baseball America’s number-54 overall prospect. He was named International League Player of the Week May 28-June 3. On August 31, the Braves summoned him to Atlanta, but he was optioned back to Richmond after one game. He was called up on September 10, and he debuted on the 12th, in a two-inning relief appearance against the Colorado Rockies in Denver. He entered in the fifth inning with the Braves trailing 7-1. The first batter Wade faced, slugger Vinny Castilla, homered, but the rookie then got Walt Weiss to ground out, struck out Lance Painter, and got Eric Young to ground to third to end the frame. He followed that with a clean sixth inning, erasing Joe Girardi, Dante Bichette, and Trent Hubbard on a total of six pitches.12 Wade pitched only two more innings that month. On the last day of the season he was the losing pitcher as the Braves lost to the Mets in 11 innings.

In the afterglow of the 1995 World Series, the Braves invited Wade to big-league camp again, and this time, the phenom was ready. “I feel that it’s my year,” he said. “In spring training, I need to prove to them that I’m ready. I got the stuff that can get me there.”13 With his occasional wildness controlled, Wade battled a young Jason Schmidt for the fifth spot in the starting rotation. After a spot start on July 24 in which Wade dominated the Cardinals in a 4-1 win, the team made the appointment official, noting that he would be still be “used out of the bullpen until a fifth starter is needed during the first three weeks of August.”14 In the win over the Cardinals, Wade was called on to fill in for an injured Steve Avery, and followed John Smoltz’s outing the previous evening in which the future Hall of Famer allowed only five hits in eight innings. “I had some big shoes to fill,” Wade said after the game.15 Wade went only five innings, but mixed a 95-MPH fastball with a slider and a changeup while allowing only one unearned run and two hits, and struck out eight. His team was impressed. Catcher Javy Lopez observed, “We heard a lot about Terrell in the minor leagues. Once he came up, he made us a believer because he’s been a really good relief pitcher. Now, he showed us he could be a starter.”16

The 1996 campaign was the best of Wade’s professional pitching career. In 44 games, including eight starts, over 69⅔ innings, he logged a 5-0 record with a 2.97 ERA and 79 strikeouts. The Braves repeated as National League champions, but fell to the Yankees in six games in the World Series. Wade pitched in relief in two of the games, logging two-thirds of an inning and giving up a walk.

In 1997 Wade began to fade. Weighing upward of 235 pounds,17 he was being considered by manager Bobby Cox as his fifth starter.18 “He’s as thin as he’ll be his whole life. He’s just a big kid,” said Cox. (Last year) he had one or two games where he got a little wild. Other than that, without him, I don’t think we win the division.”19 By early June, though, Cox was frustrated with Wade’s inconsistency. “I know he can do better. He pitched good last year. This year? In spots, he’s looked good, but he’s not consistent right now.”20 On June 9, the reason for Wade’s problems emerged, when he was diagnosed with a torn flexor in his left elbow. After almost two months of rest, he was sent to Double-A Greenville to pitch 15 innings before returning to Atlanta.21 His Southern League trip was not successful; a 4.97 ERA in 12⅔ innings. Wade was exposed in the expansion draft after the season, and was selected by Tampa Bay. It was probably no coincidence that Chuck LaMar was the Devil Rays’ first general manager.22

Wade spent most of the 1998 season in the minors, with St. Petersburg and Durham, and did not appear in a game for Tampa Bay until September 21, when he started against the Boston Red Sox, threw five innings, struck out six, and allowed three earned runs while earning the victory. He final major-league appearance came September 26, in New York against the Yankees, where he took the loss after giving up three runs on nine hits in 5⅔ innings. Overall he pitched in 61 major league games and 126⅓ innings. He struck out 125, won eight games, lost five, and earned a single save. He also had a World Series ring to commemorate his experience.

The Devil Rays sent Wade to Durham in 1999. It would be difficult to imagine a worse season for the pitcher. He gave up 21 home runs and 104 earned runs in 98⅔ innings, which earned him his outright release. The Cincinnati Reds signed him and sent him to Double-A Chattanooga, along with a brief stop at Triple-A Louisville, but Wade’s time in Organized Baseball was through. In 2003 he was 3-3 for the Macon Peaches of the independent Southeastern League. In 2004 he went 3-2 with the Pennsylvania Road Warriors and the Atlantic City Surf of the independent Atlantic League, and in 2006 he was 1-1 with the Nashua Pride of the independent Canadian-American League.

After that 2006 season, though, Wade retired from professional baseball. Now married to Nicky (Stokes), in 2019 he lived in the Atlanta area and owned a plumbing and electrical supply business. He has occasionally surfaced at autograph signings.23