Here’s a recap of the meeting of the Oscar Charleston SABR Chapter meeting on Saturday, July 27, 2019, in Indianapolis.

First, Professor Todd McDorman (also Saturday’s trivia champion!) discussed Pete Rose’s Hall of Fame ballot eligibility, which is an issue separate from his ban from the MLB. His absence from both the writers’ and veterans’ committees’ ballots, stemming from a 1991 Hall of Fame Board of Directors decision, has, somewhat ironically, made Rose’s name an annual discussion topic during induction season. Professor McDorman listed seven reasons in favor of Rose’s eligibility, while noting that the MLB could also still maintaining Rose’s ban.

Second, Professor Ronnie Wilbur accepted the 2019 SABR Baseball Research Award on behalf of her late husband, Professor Peter Bjarkman, which he won for his book, Fidel Castro and Baseball: The Untold Story. SABR presented its 2019 research awards at SABR 49, which took place in San Diego in June.

Third, Andrew Reinbold presented on oddball calls involving home runs or scenarios that might’ve seemed like home runs. His highlights included a 1999 playoff blast by Robin Ventura in the bottom of the 15th inning that was scored only as a single, despite clearing the fence, and a 2013 obstruction by Brian McCann, which blocked Carlos Gomez from touching home plate during his home run trot. This presentation tested our attendees’ understanding of the rules for umpiring and scorekeeping.

Fifth, after the meeting, some of us drove to the nearby Floral Park Cemetery to visit Oscar Charleston’s gravesite. A picture from our visit is below: 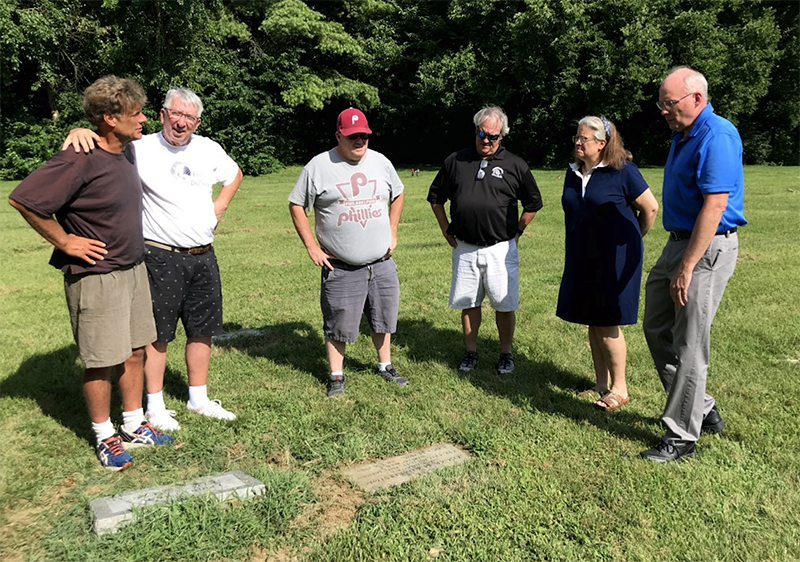 Thank you all who attended. I’ll send out information in the next couple months on an agenda for our meeting on Saturday, October 26, 2019.