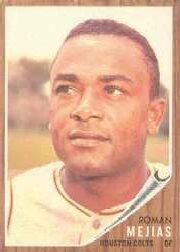 Houston was awarded a National League expansion franchise as a result of lengthy lobbying by Houston business leaders. Three in particular, George Kirksey, William Kirkland, and Craig Cullinan, had formed the Houston Sports Association in 1957, and attracted other businessmen willing to invest in a team. Later, in 1959, Judge Roy Hofheinz, then the Mayor of Houston, joined the effort. Challenged by Major League Baseball to build a ballpark before discussions on getting a team could begin, the syndicate determined that a domed stadium, cool, air-conditioned, and mosquito-proof, was a necessity (although the stadium did not appear until 1965). Meanwhile, the Colt .45s began their existence playing at Colt Stadium, a ballpark hurriedly erected to serve as a venue until the domed stadium was built.1

Bobby Shantz was the Opening Day pitcher for the Colt .45s. A former American League Most Valuable Player, Shantz was also had the notable honor of being the only player selected in both the American and National League expansion drafts (by the Washington Senators in 1960 and by the Colt .45s in 1961).2 The well-traveled veteran anchored a starting lineup featuring Bob Aspromonte, Roman Mejias, and Hal Smith.

The game began in front of an Opening Day crowd of 25,271 with Shantz striking out Cubs leadoff hitter Brock and inducing Hubbs to ground out to shortstop Don Buddin. Williams hit a single to right field, but Shantz was able to get Banks to ground out to third baseman Aspromonte.

Now the Colts went to work. Aspromonte singled to left field (the Colt .45s’ first-ever hit), then scored on center fielder Al Spangler’s triple deep down the right-field line. The Colts now had their first-ever lead.

With Shantz continuing to shut out the Cubs, the Colt .45s scored four times in the third. The big blow was Mejias’s three-run home run (another Colts first) to deep left-center field, scoring Aspromonte and Spangler, who had both walked. Hal Smith followed three batters later with a home run of his own, this one going over the left-field wall.

Now staked to a 5-0 lead, Shantz continued to hold the Cubs scoreless until the top of the seventh, when Banks hit a home run to deep left field. The Colts answered with four straight singles by Spangler, Mejias, first baseman Norm Larker, and left fielder Jim Pendleton to lead off the home half of the seventh, plating two runs. After a double play, a single by second baseman Joey Amalfitano plated the inning’s third run; now the Colts led 8-1.

Brock completed the Cubs scoring with an eighth-inning sacrifice fly, making the score 8-2. Then Mejias capped the day’s scoring in emphatic fashion with his second three-run home run of the day, a shot to deep left field, again scoring Aspromonte and Spangler.

Shantz ended his Opening Day complete-game victory by getting Ron Santo to fly out to right field. The Colt .45s had won their first game! And Roman Mejias, with two three-run home runs, a single, and six runs batted in, was the day’s hitting star.

Robert Reed, writing in his book A Six Gun Salute, noted the scene at the end of the game: “After a hero’s welcome back to the jubilant Colt .45 dugout and a standing ovation from the loud Houston crowd, Shantz sat in a hot but happy Houston clubhouse where he was asked whether he realized the historical significance of his five-hit performance.

“ ‘I had been reminded,’ he said with a smile, ‘that this was an historic occasion.’ ”3

And so it was: Major-league baseball had finally made its successful Southern debut.

1 Astros History: A History of the Astrodome,” mlb.com. houston.astros.mlb.com/hou/history/hou_history_feature.jsp?story=5.