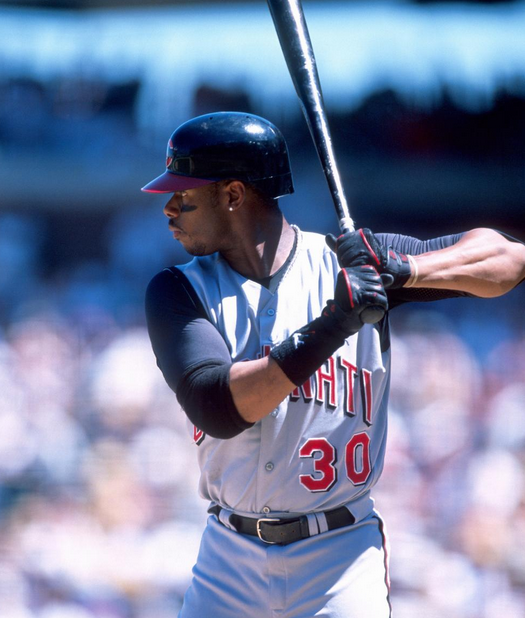 What do you give as a birthday present to a person who already has everything? Well, in Ken Griffey Jr.’s case on the occasion of his father’s 50th birthday on April 10, 2000, the 30-year-old Cincinnati Reds outfielder delivered his 400th career home run. Ken Griffey Sr. was a former major leaguer himself, a three-time All-Star who had a productive 19-year career that included 12 seasons with the Reds. What made the present even more extraordinary was that Griffey Jr. became the youngest player in history to reach that milestone. The home run also had special meaning for Griffey’s father, since he was in the dugout that day as the bench coach with the Reds.

Griffey Jr.’s major-league career started when he was a 19-year-old in 1989 with the Seattle Mariners, and he immediately made his mark in the sport as a gifted athlete. After finishing third in the American League Rookie of the Year voting, he ran off a string of 10 All-Star seasons that included an American League MVP Award in 1997 as well as four other top five finishes.

Griffey’s performance peaked with an average of 52 home runs and 142 RBIs per year from 1996 to 1999. He had accumulated 398 career home runs by age 29 and was arguably the best player in baseball.

The 2000 season was Griffey’s first with the Reds. His acquisition had been one of the top stories during the offseason. In early November 1999, he let it be known that he wanted to be traded from Seattle after rejecting the Mariners’ offer of $135 million over eight years. Because he had been in the major leagues for 10 years and with the same team for five years, he had the right to reject any trade. He initially gave the Mariners a list of four clubs (Braves, Mets, Astros, and Reds) he would consider going to. Mariners GM Pat Gillick was able to put together a deal with the Mets, which Griffey vetoed.1

Griffey suddenly narrowed down the list to only the Reds, which left Gillick in an untenable situation with regard to getting comparable value in return. Through no fault of Gillick, the Mariners wound up trading Griffey to the Reds for Mike Cameron, Brett Tomko, Antonio Perez, and Jake Meyer on February 10, 2000, in what was deemed one of the most lopsided baseball deals ever.2However, Griffey was literally going home to Cincinnati, where his father had started his career as a member of the Big Red Machine in the 1970s and where Junior spent his childhood.

The game on April 10 was Opening Day at Coors Field in Denver, pitting the Colorado Rockies against Griffey’s Reds. The Rockies had gone 2-4 on the road, while the Reds had three wins in their first seven contests of the season.

The Rockies were coming off a 72-90 season and fifth-place finish in the National League West Division in 1999 under manager Jim Leyland. Leyland had been replaced by Buddy Bell.

The Rockies’ Opening Day roster contained only six players from the Rockies’ roster on Opening Day in 1999. At the time, the 19-player turnover was believed to be the most in major-league history. The 1997-98 Florida Marlins had seven players remaining.3

The Reds were managed by Jack McKeon, who had led the team to a second-place finish (96-67) in the National League Central Division the year before. Griffey was being counted on to lead them to their first division title since 1995.

The Rockies having led the National League in attendance every year since their inaugural season in 1993, the huge crowd of 48,094 at the Monday afternoon game at Coors Field came as no surprise. Bell gave the starting pitcher’s job to Rolando Arrojo, who had been in the baseball headlines in 1997 when he defected from Cuba, eventually signing with the Tampa Bay Rays. The 6-foot-4 righty was in his first season with the Rockies and had pitched 5⅔innings in a no-decision game against the Atlanta Braves on April 4.

Right-hander Steve Parrisdrew the starting assignment for the Reds. The four-year major-league veteran was coming off his best season in 1999 when he posted an 11-4 record and 3.50 ERA for the Reds. He had taken the loss against the Milwaukee Brewers in the April 5 game in Cincinnati.

The Rockies got on the scoreboard first in the bottom of the second inning when Darren Bragg doubled in Jeff Cirillo, who had led off with a double.

The Reds tied the score in the top of the fourth inning with Griffey’s historic 400th home run, with the bases empty. It was his fourth career home run off Arrojo.

In the bottom of the fifth, the Rockies broke the tie with four runs. Arrojo led off the inning with a single in only his third major-league game as a batter. Tom Goodwin followed with a line drive triple to deep center field that scored Arrojo. Mike Lansing then hit a home run to make the score 3-1.

After a single by 1998-99 National League batting champion Larry Walker and a walk to Cirillo, Reds pitcher Parris was replaced by Hector Mercado. Todd Helton flied out for the first out, and then Walker was caught trying to steal home. Bragg singled in Cirillo for his second RBI of the game and the Reds’ fourth run of the inning.

In the top of the sixth, the Reds recorded three straight singles by Alex Ochoa, Chris Stynes, and Barry Larkin. Griffey hit a sacrifice fly to center that scored Ochoa, but the rally was killed when Dante Bichette, who had been traded from the Rockies in the offseason, grounded into a double play to end the inning.

Helton added to the 5-2 Rockies lead with a homer off Reds reliever Scott Sullivan with Cirillo on base in the bottom of the seventh.

Trailing 7-2, the Reds tried to mount a comeback in the top of the ninth, but fell short. Rockies reliever David Lee started the inning. With two outs, rookie D.T. Cromer hit a home run with Ed Taubensee and Aaron Boone on base. It was Cromer’s first major-league home run after he spent the previous eight seasons in the minors.

Ochoa reached base on an error by Lee, who was then replaced by former Reds reliever Stan Belinda. Belinda struck out Stynes to record a save in the Rockies’ 7-5 win.

Arrojo, who gave up two earned runs on six hits in six innings pitched, got credit for the win. Parris took his second loss in as many games by yielding five earned runs on eight hits in four innings.

Cirillo hit two doubles and scored three of the Rockies’ runs. He and Helton would become the first pair of National League teammates to hit 50 or more doubles in the same season.4

After the game, Griffey retrieved the home-run ball from the spectator who caught it by swapping his fielder’s glove for it. Griffey wanted the ball so much he was prepared to also give up an autographed bat and a warm-up jacket. He said, “I can get another glove. I can’t get another 400.” He presented the ball to his father, who proudly displayed it while strolling through the clubhouse after the game.5

The previous record holder for youngest player to reach 400 career home runs was Jimmie Foxx, who was 30 years and 248 days old, while Griffey was 30 years and 141 days old.6Griffey’s home run moved him into 30th place on the career home-run list, passing Detroit Tigers Hall of Famer Al Kaline.7

Griffey finished the season with 40 home runs. His career was on a trajectory to potentially surpass Hank Aaron as the all-time home-run leader. However, he suffered several injury-plagued seasons that affected his power output during the second half of his career. Consequently, he fell considerably short of Aaron, finishing his career in 2010 with 630 home runs.8

Griffey hit home runs on his father’s birthday on three other occasions, including the first one of his career in his 1989 major-league debut.9The father-son duo shared another memorable home-run moment when they both hit round-trippers in the same game as teammates with the Seattle Mariners in 1990. But the historic one in 2000 also had to rank among the most unforgettable for the family.