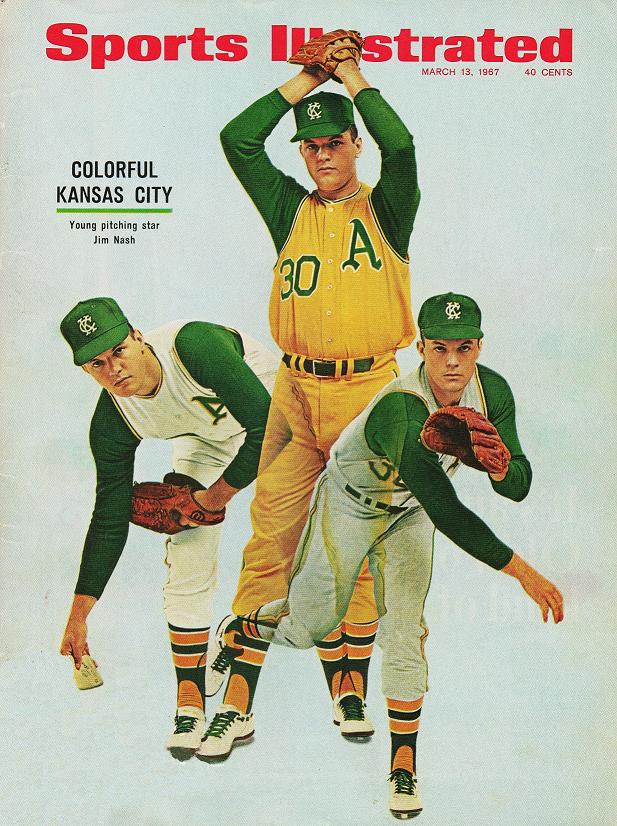 The Kansas City Athletics made history in their 1967 Opening Day victory over the Cleveland Indians by something they wore: white shoes. It was the first time a major-league team had played in anything but the traditional black footwear. As described by The Sporting News, the shoes were “solid white except for green trim around the tops and green laces.”1

The shoes made an immediate impact on the game. After the first pitch from Athletics starter Jim Nash to leadoff batter Vic Davalillo, Indians manager Joe Adcock told umpire Larry Napp that he was playing the game2 under protest. Adcock complained that Nash’s white shoes were distracting his hitters.3 Less noticeably, the A’s wore gold undersocks and donned gold batting helmets, replacing the green ones of the previous season before.4 Of the helmets, the A’s iconoclastic owner Charles O. Finley said, “I liked the old one, but the gold batting helmets – shiny ones – complement the rest of the uniform and the white shoes.”5 The new colors were not exactly a surprise; a picture of Nash decked out in the new duds appeared on a Sports Illustrated cover during spring training.6

The new-look uniforms were not the only pregame excitement at Municipal Stadium. The 20,590 spectators saw the reigning Miss America, Jane Anne Jayroe of Oklahoma, throw out the first pitch. Jayroe, “who already had demonstrated her ability as a musical conductor here before the Kansas City Philharmonic orchestra, displayed her skill as a pitcher,” the Kansas City Times reported.7

Nash’s first pitch came shortly after 7:00 P.M. for the opener. The weather was cool and breezy, as to be expected for Kansas City in early April. The temperature would dip to 57 degrees by 9:00.

Despite manager Adcock’s protest after Nash’s opening pitch, the American League had already okayed the white shoes. The Athletics had received permission from AL President Joe Cronin and Cal Hubbard, the league’s supervisor of umpires, to wear “the colorful footwear.”8 A’s manager Alvin Dark defended the choice of shoe color. “A pitcher has both feet on the ground when he releases the ball. A hitter is going to be following the ball, not the shoes,” Dark said.9

After Adcock’s futile protest, Vic Davalillo got back into the batter’s box and “overcame the white shoe problem sufficiently to hit a drive that Joe Nossek caught in deep center field.”10 (It’s not in any record book, but Davalillo’s fly was the first recorded out by a pitcher wearing white shoes.)

The white-shoe controversy wasn’t the last protest by manager Adcock. He argued in the sixth inning that Nash was quick-pitching the Indians’ batters. According to Adcock, Nash was taking his sign from catcher Phil Roof with his hands in front of his waist, “ready to pitch without further notice.” Adcock fared better with this protest than his first one. “Joe made his point because Nash worked slower thereafter,” wrote Russ Schneider in the Cleveland Plain Dealer.11

Once the shoe controversy passed and the game resumed, the Indians took a 1-0 lead in the second inning. Gus Gil, playing his first major-league game, reached on a two-out error by Athletics third baseman Ed Charles. Duke Sims walked, and Larry Brown followed with a single to right field, scoring Gil. Cleveland pitcher Sam McDowell ended the threat by lining out to Mike Hershberger in right field.12

The Athletics quickly tied the game. With one out in the bottom of the inning, Roof drew a walk, went to second on a sacrifice by Nash, and to third on Bert Campaneris’s infield single to the first-base side. Mike Hershberger’s single to right field drove home Roof. The inning ended when Campaneris was thrown out attempting to steal third base.

The Athletics broke the tie in the third inning. Danny Cater led off with an infield single to the first-base side and advanced to second base on McDowell’s wild pitch. Ed Charles walked and Joe Rudi, also making his debut, reached on a bunt down the third-base line. With the bases loaded, McDowell struck out Dick Green. But Nossek singled to left field, scoring Cater and Charles. McDowell got out of the inning by striking out Roof and getting Nash on a fly ball to left,

The Athletics kept the lead until the top of the sixth inning, when the Indians scored twice to tie the score. With one out Chuck Hinton doubled to center field and Gil walked. Both runners came home when Sims doubled off the left-field fence.

Kansas City broke the tie in the seventh against Steve Hargan, who had relieved McDowell in the sixth. Ed Charles led off with a single to right field. Allan Lewis, though, was picked off first base while making his debut as a pinch-running specialist. Rudi followed by striking out, but he reached first base on Sims’ passed ball.

Roger Repoz ran for the rookie and stole second. Green walked, but Hargan got Nossek to pop out. Jim Gosger, batting for Roof, walked to load the bases. Ramon Webster, also appearing in his first major-league game, batted for Nash and grounded to Larry Brown at shortstop. Webster, though, was called safe after Indians first baseman Fred Whitfield dropped the throw, allowing Repoz to score. Whitfield recovered the ball and threw out Gosger at second, but the Athletics took the lead on an unearned run.

The controversy over the Athletics’ white shoes eventually faded, and shoes – as well as uniforms – of all colors became a part of the game. What was perhaps more momentous was that this was the last season the A’s called Kansas City home. In 1968, they became the Oakland Athletics.

2 It was Opening Day but the game was played at night.