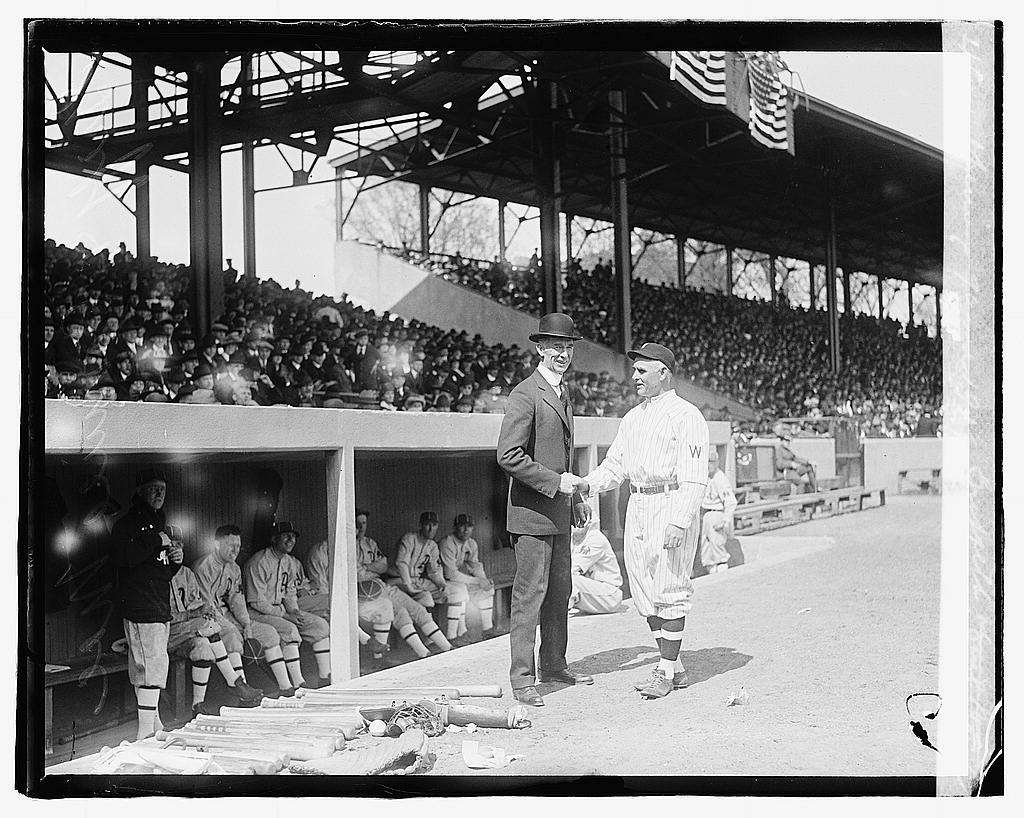 As the 1911 season started, Griffith Stadium represented a work in progress after an offseason fire. Nevertheless, Washingtonians eagerly anticipated their new ballfield. On Opening Day Joe S. Jackson gushed in the Washington Post, “This is the day, and National park the place, on and at which it is expected that all Washington records for baseball attendance and related enthusiasm will be smashed, shattered and tossed into the discard.”1

Boston arrived in Washington the day before the game “to get in a few licks … but orders were … that the team could not practice [at] the [new] park on account of the workmen who were … clearing away … debris.”2

The ballpark received praise from Boston reporter Tim Murnane, a leading knight of the keyboard before his premature passing in 1917. “A new grandstand and bleachers, built in less than three weeks and affording fine accommodations for fully 15,000 spectators, was the work of magic,” marveled Murnane.3

With “overcast skies and a prediction of rain,” the conditions did not live up to the grounds.4 The “game was slowly played in a chilly east wind. [Making his second Opening Day appearance,] President Taft sat muffled up in a heavy fur overcoat throughout the struggle.”5 Taft had done his Opening Day duties when he “swung his arm and hurled the ball straight and true to ‘Dolly’ Gray, the Washington pitcher.”6

Vice President James Sherman joined Taft. “Sherman is a genuine, expert scoring, and peanut-eating regular. Truly, this is an administration which is correct from a base ball standpoint,” noted Sporting Life.7

The politicians missed seeing the ace of the Senators pitch, although before the game “he fooled around in the outfield for quite a while.”8 Demanding a $9,000 salary, Walter Johnson finally signed for $7,000 two days before the opener.9 As a result, Gray started for the Senators and retired the Red Sox in order in the first inning.

The 21-year-old Smoky Joe Wood, “expected to be the Red Sox star pitcher,”10 started for Boston. Washington’s leadoff hitter, Clyde Milan, reached on an error by Heinie Wagner, one of four committed by the Boston captain in the contest,11 and stole second. After a strikeout, Kid Elberfeld reached on a fielder’s choice retiring Milan and stole second. A foul tip knocked out catcher Red Kleinow12 in favor of backup backstop Bunny Madden. Wood got another strikeout to escape the eventful but scoreless first.

After a second straight one-two-three inning by Gray, Wood walked John Henry with one out in the second, but got two grounders to strand the Washington first baseman.

Batterymates Madden and Wood, the latter an excellent-hitting pitcher who later became a good-hitting outfielder, hit consecutive singles to begin the Boston third. Wood took second on the throw to put two runners in scoring position with none out. Groundouts cashed in both Bostonians and put the Red Sox up 2-0. Milan singled and stole another bag in the third, but the Senators still could not score.

Boston plated another pair in the fourth. Duffy Lewis hit a ground-rule double into the outfield crowd, and Wagner walked. In his first big-league game, Rip Williams hit to pitcher Gray, who threw wildly to third to load the bases with none out. Clyde Engle reached on a fielder’s choice force at the plate, but Madden’s single put the Sox up 3-0. Milan threw out Williams trying to score, but Gray uncorked a wild pitch to give Boston a four-run lead.

Henry singled and stole second in the fourth, but remained stranded. Washington had four steals in four innings but no runs. The ease with which the Senators ran the bases boded well for the hosts. “Neither Boston catcher seemed to be in any shape to stop base runners,” wrote the Post. “In fact, the whole [visiting] team looked far from being ready for a hard season.”13

After Gray sailed through the top of the fifth, Washington scored in its half with a run on a walk to Gabby Street and singles by Milan and Elberfeld.

Gray set down Boston easily in the top of the sixth. In the bottom of the inning the Senators transformed a 4-1 deficit into a 7-4 lead. With one out, Henry singled. Wagner made another error on a ball hit by George McBride. Street singled in Henry to cut the Red Sox lead to 4-2.  Batting for Gray, Wagner fielded Warren Miller’s grounder and threw wildly to home as McBride scored to trim the lead to 4-3. Milan’s single loaded the bases. Ed Karger came on for Wood, who got little help from his fielders.

Karger “failed to show any real stuff when called upon.”14 Germany Schaefer, the second pinch-hitter used by Washington manager Jimmy McAleer in the inning, singled to tie the game. (“McAleer used excellent judgment … and won his game by his substitutions in the sixth,” the Washington Post observed.)15 Then Elberfeld doubled in two runs and Washington led, 6-4. Bill Cunningham walked to reload the bases, and Karger plunked Doc Gessler16 to score Washington’s seventh run and the sixth in an inning in which nine straight Senators reached.

Pitcher Ewart “Dixie” Walker, the father of outfielders Dixie and Harry the Hat, replaced Gray in the seventh. Each team scored in the eighth. Boston’s Harry Hooper walked and Tris Speaker singled him to third. The Gray Eagle tried for second, but Gessler threw him out. Speaker’s overaggressive baserunning hurt Boston. Lewis singled in Hooper as the Red Sox edged to within 7-5, but Wagner’s misery continued as he hit into a rally-killing double play.

Doubles by Elberfeld and Gessler in the eighth provided insurance for Washington, restoring the three-run margin at 8-5.

In the ninth Walker lived up to his name by walking Williams and pinch-hitter Steve Yerkes.  With two outs, Larry Gardner singled to load the bases. With the tying runs on, Hooper sent a fly deep to left, but Schaefer made the catch to end the game.

While a later scorer could would have given Gray the win and Walker the save, the official scorer on this day anointed Walker with the winning laurels (coming off consecutive 19-loss campaigns, Gray could have used the help in 1911, his last season in the majors, which he finished with a 2-13 record). Give an assist to Wagner and the defective Boston defense. Fans of the Senators may have gotten an exaggerated sense of the team’s prowess, as Washington would not score as many as six runs in an inning again until the third frame of a 14-7 win on June 2 against Detroit. On that day, the Senators would make six errors but triumph. On this day, six Red Sox errors gifted Washington with a wild win in the first Griffith Stadium game.

16 In 1910 Gessler had finished in a three-way tie for the AL lead by getting hit by a pitch 16 times. In 1911 he upped his total to a career-high 20, but finished second behind teammate Elberfeld’s 25. Washington finished no better than fourth in any offensive category in 1911 save for its league-leading total of 80 HBPs.