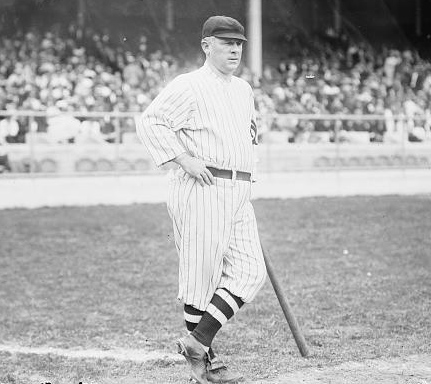 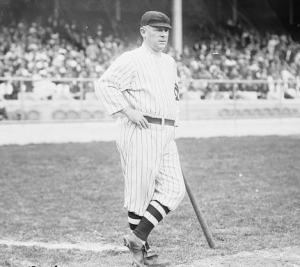 The New York Giants fell short of the National League pennant for the third straight year in 1920, finishing seven games behind their crosstown rival Brooklyn Robins. After losing three straight World Series from 1911 to 1913, John McGraw’s team finished second in the NL in 1914. They returned to the fall classic in 1917, losing to the Chicago White Sox in six games. Three more second–place finishes in a row followed.

Manager McGraw hoped his Giants would return to championship form in 1921 and win their first World Series since 1905. In a piece for the New York Herald on April 10, he wrote: “I feel that the Giants are bound to make a good showing. I have been asked repeatedly if I thought that the New Yorks would win the pennant, and I want to say that I would rather wait until Labor Day to answer that question. I am sure that in the Giants of 1921 the fans of New York will find a club which they will like to watch, and which will give the old city another contender. I am making no claims, but I am making no surrender to any other club in the league.”1

Giants fans would be seeing some changes for 1921. Frankie Frisch was taking over second base from Larry Doyle with Goldie Rapp, “a high priced St. Paul recruit,” at third replacing Frisch, Dave Bancroft would be at shortstop, and High Pockets Kelly at first. The New York Times said of the infield that it “has unusual speed both in fielding and on the bases and contributes much to the batting strength of the club,”2 which likely gave McGraw confidence in his team as it headed into the new season.

New York began the 1921 season with a trip to Philadelphia to take on the Phillies at the Baker Bowl on April 13. Philadelphia had finished in the National League cellar in the previous two seasons. The Phillies had a new manager for 1921; owner William Baker had tagged Wild Bill Donovan, an outstanding pitcher for many years with Brooklyn and Detroit, to replace Gavvy Cravath.

Despite the Phillies’ recent struggles, excitement for the new season was high in Philadelphia.3 The Baker Bowl was packed with 30,000 fans on Opening Day, “the largest crowd the Phillies had entertained at home since they figured in a World Series in 1915 and so it was a rather strange sight.” Long before Philadelphia Mayor J. Hampton Moore threw out the first pitch, Phillies fans were eager to see their team take the field. The New York Times reported that “[h]alf an hour before the game started the seats were filled, boys and men had picked out all the vantage points on the centre field fence, and yet a crowd of several thousand had formed in lines outside trying to get into the park.”4

Donovan selected Jimmy Ring to be the team’s starter. The right–hander had come to the Phillies in the offseason from Cincinnati along with Greasy Neale for Eppa Rixey after finishing 17–16 with a 3.54 ERA for the Reds in 1920. Ring allowed just one hit, an Earl Smith single, in the first three innings.

But the Giants took advantage of the Phillies’ weak defense in the fourth, scoring a run without getting a hit. Bancroft led off with a walk and advanced on a sacrifice. Frisch hit a groundball back to the mound. Ring’s only play was to first; Bancroft scooted over to third.

Curt Walker grounded to third and Bancroft dashed for home. Third baseman Russ Wrightstone threw to the plate, but the ball bounced off Bancroft’s shoulder and he scored for a 1–0 Giants lead.

Giants starter Phil Douglas also contained the Phillies in the early innings. Douglas, who finished 14–10 with a 2.71 ERA in 1920, gave up a hit in each of the first three innings and was “unsteady from the outset but it was not until the fourth that his opponents managed to break through and take the lead.”5

Down 1–0, Philadelphia came back and their “battering of Douglas in [their half of] the fourth appeared to be a staggering blow to New York hopes.”6 Wrightstone led off with a single and moved to second on a groundball back to the pitcher by Frank Parkinson. Dots Miller’s single to center brought him home with the tying run.

Miller raced to second on the throw to plate and moved to third on Frank Bruggy’s fly out. Ring then doubled off the center–field scoreboard. Miller scored to give Philadelphia a 2–1 lead.

Casey Stengel looped a single into short left field for a single that brought Ring home. Johnny Rawlings drove in Stengel with a two–bagger to right field. By the time Douglas got the third out, the Phillies were ahead 4–1.

Although Ring “seemed to be the master of his fate on this day and in supreme command of the situation,”7 New York began to close the gap in the sixth. Three consecutive singles to start the inning plated a run. A sacrifice fly by Kelly scored another; the Phillies’ lead was down to 5–3.

The Giants continued “their assault on Ring” in the seventh.8 Doubles by Rapp and George Burns, singles by Frisch and Walker, a stolen base and error by catcher Bruggy brought four runs across the plate and sent the Giants back in front, 7–5.

Donovan had seen enough of Ring. “A mock trial and convention was held in the centre of the sward, and Bill crooked the finger for Ring to stop sounding and hit the showers.”9 Huck Betts came in to snuff out the Giants rally and get the final out.

The Phillies clawed back in their half of the inning, “showing a punch and a fighting spirit.”10 Jesse Barnes, who had taken over mound duties from Douglas in the fifth, walked Wrightstone with one out. Parkinson’s double put two runners in scoring position.

Miller hit a groundball down the third–base line. When Wrightstone started for home, Rapp, playing in his first major–league game, hesitated and then threw the ball over the catcher’s head, allowing Wrightstone to score and Parkinson to reach third. Bruggy’s groundout brought Parkinson home, tying the game, 7–7.

Throughout the contest, “thousands were carried to the very height of joy, only to be thrown before long into the slough of despond. Now they cheered, now they groaned, as victory appeared to slip. It was a fight between two determined forces.”11

The game remained tied for the next three innings. The Phillies had a chance to win in the ninth. Wrightstone led off with a double. But then “wires were crossed” as Parkinson tried to sacrifice him but didn’t come through with his bunt. Wrightstone was thrown out at third and “the Phils last chance went glimmering.”12

Still on the mound in the 10th, Betts continued to keep New York from scoring. Fred Toney took over pitching duties for the Giants in the bottom of the 10th and got the side out in order.

New York finally broke through in the 11th. Burns led off with a single off Betts and Bancroft walked. Frisch’s force–play grounder left runners at the corners. Lee King’s sacrifice fly brought home Burns to give the Giants the lead.

Kelly then “slammed one against the center–field fence and the ball caromed into the bleachers for an inside–the–park home run that proved the deciding factor in the conflict.”13 The Giants took their 10–7 advantage to the bottom of the 11th.

Despite the three–run lead, Toney “did not get away without a scare”14 in the home half of the inning. Irish Meusel doubled and reached third on Wrightstone’s single. Parkinson hit into a double play that scored Meusel. But Miller flied out to center field to end the game.

The Giants won the contest 10–8, slugging out 15 hits against the Phillies’ 18. McGraw needed to use three pitchers to get the win. Sportswriter MacKay summed up the game with these words: “The eleven innings that legalized this contest embraced a number of events that spoiled many dispositions, ruined some vocal [cords] and permitted the rooters for the home team to roam the heights of hysteria and wander into an indigo finish.”15

The victory ended up being the start of a championship season for the Giants. New York finished 94–59 to earn the National League crown by four games over the Pittsburgh Pirates; they beat the Yankees in the World Series, five games to three, to earn their first world championship in 16 years.

On this madcap April afternoon at the Baker Bowl, any October glories were a long way off. But their initial victory likely gave McGraw confidence in the statement that he had made several days earlier: “Unless we have bad luck, I do not fear any club in the National League.”16

In addition to the sources cited in the Notes, the author used the Baseball–Reference.com and Retrosheet.org websites for box–score, player, team, and season pages, pitching and batting logs, and other pertinent material.

15 MacKay. But the Phillies disappointed their fans once again as they struggled all season. They would finish in the cellar once again with a 51–103 record. Donovan was fired in mid–July with a 25–62 record after he was called to testify at the Black Sox trial. Baker felt that Donovan was too familiar with many of the figures in the case and dismissed him.

16 “Clubs at Barrier for Pennant Races.”