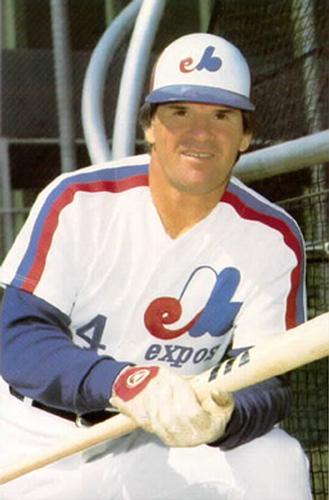 As Pete Rose stood on second base, basking in the cheers of the Expos faithful on hand for the 1984 home opener, it’s reasonable to think that he was feeling pretty good. He had made it through the most difficult offseason of his major-league career to that point, with the Expos the only team to express interest in employing him for the 1984 season after the Phillies declined to offer him a new contract. This day belonged to Charlie Hustle, as he reached a milestone only one other major leaguer, Ty Cobb, had accomplished — 4,000 hits.

The Expos and Phillies squared off on April 13, 1984, on the 21st anniversary of Rose’s first major-league hit. Each team had high expectations for the season; the Phillies were coming off a loss in the 1983 World Series and the Expos were hoping to reverse a disappointing third-place finish the previous season. Those high expectations, along with the chance to witness history — not to mention the opportunity to hear a young Montreal chanteuse named Celine Dion sing the Canadian and American national anthems — enticed 48,060 fans to Stade Olympique. As writer Brian Kappler noted, “The Big O had a festive atmosphere for Rose’s big day.”1

That festive atmosphere came compliments of the Cincinnati Reds pitching staff. Rose had had a chance to get the milestone hit in his hometown of Cincinnati in the last game of the Expos’ season-opening road trip, but Reds pitchers walked him four times; he saw only two strikes in his four plate appearances.2

The Phillies sported a 5-2 record heading into the game, while the Expos got off to a middling 4-4 start. The Phillies sent 41-year-old left-hander Jerry Koosman to the mound for his second start of the season, while the Expos countered with right-hander Charlie Lea. As for Rose, his hit total stood at 3,999at the start of the game. Rose had accumulated nine hits in the season’s first eight games, and was batting .273 with a .368 on-base percentage.

Philadelphia threatened in the first, as Mike Schmidt and Joe Lefebvre reached on a single and a walk. Lea worked out of the jam by striking out Glenn Wilson, and the Olympic Stadium crowd swelled with anticipation as Rose crouched in the batter’s box to lead off the home half of the first. The swelling went down quickly as Rose grounded out to second.

Lea again held the Phils scoreless in the top of the second, and Rose got another chance at 4,000 in the bottom of the inning. Tim Wallach reached on a single to lead off the inning, but was erased on a fielder’s choice by Bobby Ramos. After number-8 hitter Angel Salazar flied out, Lea hit a grounder to shortstop that Ivande Jesus muffed. Ramos scored and Lea wound up on second. Rose stepped in for another shot at history, but grounded weakly to Koosman, who mishandled the ball for another error that allowed Lea to reach third. Lea then scored when Bryan Little singled. Tim Raines walked but Koosman got Andre Dawson to fly out to left fielder Glenn Wilson. The Expos led, 2-0.

The Phils got one run back in the top of the fourth. Wilson doubled to center field and scored from second on a single by Bo Diaz, making it 2-1 Expos.

Montreal got that run back and more in the bottom of the fourth. Lea led off with a walk, and Rose again faced Koosman. Rose struck a hard liner to the right-field corner, over the glove of outfielder Joe Lefebvre. Rose ran out from under his batting helmet on the way to second base, as was his custom. Lea advanced to third on the play. The game was halted for two minutes as the crowd celebrated Rose’s achievement. Rose described the Olympic Stadium ovation as “special to me because I’m new here.”3 Phillies shortstop Ivan DeJesus presented the ball to Rose, who walked it over to Expos hitting coach Billy DeMars. None of the Expos players came out of the dugout to congratulate Rose, but that doesn’t mean they weren’t pleased for him.

“I wasn’t cheering as much as I would if I hadn’t been pitching,” said Lea. “I had to think of the next inning and things like that. But everyone was pulling for him. We wanted to see him get it in Cincinnati.”4

When play resumed, Little grounded out. Then Rose, displaying the basepath aggressiveness for which he was well known, scored from second on Tim Raines’ soft single to center as Phils center fielder Von Hayes played the ball nonchalantly. With Lea having preceded Rose home on Raines’ single, the inning ended with the Expos up 4-1.

The Expos got one final run in the seventh, as Andre Dawson tripled to right and was doubled home by Gary Carter. Lea held the Phils until two walks and a hit batsman loaded the bases with two outs in the top of the ninth. Reliever Gary Lucas retired Phils pinch-hitter John Wockenfuss on a grounder to third baseman Tim Wallach to end the threat, and the historic game was in the books.

The day ended triumphantly for Rose and the Expos, but Rose’s Montreal career proved to be short and not very sweet. The team traded him to the Reds on August 6 after he had played 95 games, in part because he wasn’t the versatile type of player that manager Bill Virdon liked. Rose ended his time in Montreal having contributed a .259 batting average, with a .334 on-base percentage and .295 slugging percentage for an OPS of .629. He did not hit a home run, and had only eight extra-base hits. The failed Rose experiment typified the Expos’ season, as they finished at 78-83, with April being their only winning month. While the signing of Rose did not have the outcome either he or Expos general manager John McHale had envisioned, Pete’s 4,000th hit made the Phillies-Expos contest on April 13, 1984, one of the most notable games in Montreal Expos history.