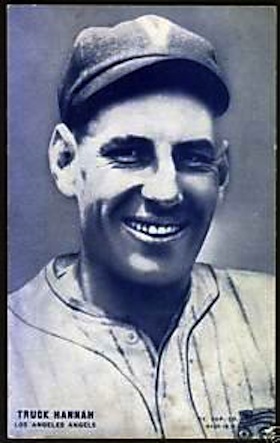 Only 17 men born in North Dakota have appeared in a major-league baseball game.1 The first to do so was Truck Hannah, starting catcher for the New York Yankees on Opening Day, April 15, 1918. James Harrison Hannah was born near Larimore, Dakota Territory, on June 5, 1889, less than five months before President Grover Cleveland bestowed statehood on both North Dakota and South Dakota. As a young child he moved with his mother and two sisters to Seattle.

Christy Mathewson, the Hall of Fame pitcher, explained in an article appearing in the September 16, 1917, Boston Globe how Hannah came to be a Yankee2:

“Now Hannah is not a youngster. He weighs more than 200 pounds and isn’t fast. He will never beat out any bunts or infield hits.

“But they say that he is a bear at handling young pitchers, and has a line of talk behind the plate that gets the goat of many a batter. Perhaps the Yankees will use him more as a coach than an active participant, but they tell me he puts life into a team at all times.

“None of the regular New York scouts recommended Hannah. He was picked up on the strength of a boost by Fred Snodgrass, who, I understand, is a sort of semi-official scout for the Yankees. Snodgrass is playing with the Los Angeles team of the Pacific Coast League. When Snodgrass wrote recommending Hannah, he said: ‘I don’t like him personally, but I must say he is the best all around catcher in this league, and my dislike for him does not blind me to that fact.’”

The Yankees team Hannah joined was not the feared Bronx Bombers of later years. For one thing, they did not play their home games in the Bronx, but in Manhattan’s Polo Grounds. For another, they would finish the 1918 season fourth out of eight American League teams with a 60-63 record; their third losing season in the last four. With Colonel Jacob Rupert controlling the reins of ownership, however, and Miller Huggins managing, their ascent to glory was nearing. In 1919 they would go 80-59, and acquire Babe Ruth after the season. In 1920 they would finish just three games behind World Series champion Cleveland, and in 1921 they would win their first of three consecutive American League pennants.

Hannah played in 244 games for the Yankees, but was not on the championship teams. In January 1921 he was sent, with three other players, to the Pacific Coast League’s Vernon (California) Tigers. Hannah never returned to the major leagues, but played, coached, and managed in the minor leagues until 1942. He is enshrined in the PCL Hall of Fame.

On the last day of the 1918 season, Walter Johnson stood atop the American League in wins (23), shutouts (8), strikeouts (162), and ERA (1.27); on the first day of the season, however, he did not pitch well. “It was a sorry showing for the great pitcher,” observed a writer who covered the game.3 Johnson pitched all nine innings, but gave New York 11 hits, 5 walks, and 6 runs, 4 of them earned. Washington lost 6-3. Yankees starter George Mogridge was credited with the win even though he was ineffective and pitched just 3⅔ innings. Under modern scoring rules the win would have been credited to Allen Russell, who pitched 5 1/3 innings in relief without surrendering a run.

A large crowd of 13,000 was on hand for the opener. President Woodrow Wilson had been scheduled to throw out the ceremonial first pitch.4 Instead, he attended the funeral of Missouri’s Democratic Senator William J. Stone, which was being held at the same time elsewhere in the capital.5 Louis Brownlow, commissioner of the District of Columbia, fulfilled Wilson’s ceremonial duty.6 Liberty Bonds were sold before the game, with an earnest plea to the fans by an Army sergeant home from Europe, where World War I was being fought.7

New York scored twice in the first inning.8 With one out, Elmer Miller singled. Del Pratt flied out, but Wally Pipp beat out a slow roller toward second, and Frank Baker singled to score Miller and send Pipp to third. Ping Bodie’s weak grounder to third baseman Eddie Foster was bobbled, allowing Pipp to score. Roger Peckinpaugh made the third out.

Hannah singled in his first major-league at bat to lead off the second inning and was sacrificed to second, but the Yankees failed to score.9 In the third inning, consecutive singles by Pratt, Pipp, and Baker gave New York a 4-0 lead.10 The Yankees scored twice more in the eighth on Hannah’s walk, Russell’s single, Frank Gilhooley’s double, and Miller’s single.11

Washington scored all its runs in the fourth inning.12 A single by Doc Lavan scored Howie Shanks. A single by Eddie Ainsmith sent Joe Judge and Ray Morgan home “and drove Mogridge from the box.”13 Russell issued a walk, which loaded the bases, then recorded the third out. He blanked the Nationals the rest of the way.

It was a good first game for Hannah. He singled and walked against a legendary pitcher, scored a run, and helped his team to victory. Washington fans had to have been disheartened as they headed home. They had missed the scheduled appearance by President Wilson, and were let down by their revered Walter Johnson.

3 Charles A. Taylor, “Frank Baker Helps Humble the Great Walter Johnson,” New York Tribune, April 16, 1918: 13. The account of the pregame activities, all quotations, and descriptions of the game action are based on Taylor’s article.