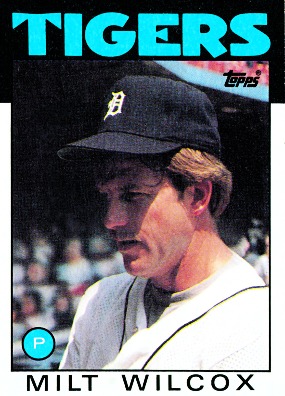 The early-season Friday evening match-up was a game between two American League teams ready to make a move in their respective divisions. Although much was expected of the Tigers in 1982, they finished with a somewhat disappointing record of 83-79. A little more than a week into the 1983 season, the Tigers were 4-4 and in a three-way tie for third place, a half-game behind the first-place Cleveland Indians in the American League East. The fifth-place White Sox were 3-4 and 3½ games behind the American League West-leading Texas Rangers. They were coming off a third-place finish in 1982 and were optimistic that they could improve upon that.

Milt Wilcox drew the starting assignment for the Tigers. The veteran right-hander was making his second start of the season and entered the game with a record of 0-1. He was the losing pitcher in the Tigers’ 6-3 loss to the White Sox one week earlier in the Tigers’ home opener at Tiger Stadium and was not expected to pitch in this series. Tigers manager Sparky Anderson pushed back the 32-year-old Wilcox’s scheduled start against the New York Yankees by 24 hours because of an inflamed left knee.1

Wilcox was opposed by right-hander LaMarr Hoyt. The 27-year-old Hoyt was making his third start of the season and embarking on a Cy Young Award-winning season.2 He was 1-1 with a 4.41 ERA.

The game-time temperature was 43 degrees, and it probably felt colder with the 12 mph wind from the west. The cold temperatures didn’t deter an announced crowd of 19,483 from making their way to Comiskey Park. And those who did brave the elements were treated to a pitching performance that was nearly perfect.

Hoyt and Wilcox both breezed through the first inning without allowing a baserunner before the Tigers got on the board in the top of the second. Catcher Lance Parrish doubled to right and moved to third when Johnny Grubb grounded out to first baseman Greg Walker, who tossed the ball to Hoyt covering first. Glenn Wilson tripled to right to drive in Parrish with the game’s first run. Chet Lemon followed with a single to right to drive in Wilson. Rick Leach singled to left and Lemon moved up to second. With Alan Trammell coming to the plate, it appeared the Tigers were poised for a big inning. However, Lemon was thrown out by Carlton Fisk when he tried to steal third and Trammell struck out to end the inning.

The game remained 2-0 until the top of the sixth inning. Howard Johnson led off with a single to center. After Larry Herndon struck out, Parrish’s second double of the night, this one to left, scored Johnson and increased the Tigers’ lead to 3-0. Grubb reached on an error by shortstop Jerry Dybzinski that allowed Parrish to advance to third. Wilson bounced back to Hoyt, who threw home to get Parrish for the second out. Lemon singled to right and was thrown out trying to stretch his base hit into a double, but not before Grubb crossed the plate with the Tigers’ fourth run.

Meanwhile, Wilcox continued to retire the White Sox in order and appeared to be gaining strength. In the fifth inning he struck out Greg Luzinski and Ron Kittle looking before Walker lined out to first to end the fifth. In the sixth, Wilcox struck out the side: Fisk, Vance Law, and Dybzinski.

Leach struck out to lead off the seventh for the Tigers before Trammell singled and advanced to second on an error by Walker. This spelled the end to Hoyt’s evening. White Sox manager Tony La Russa brought in left-hander Jerry Koosman. The 17-year veteran, making his third appearance of the season, retired left-handed-hitting Lou Whitaker on a grounder back to the mound and struck out pinch-hitter Tom Brookens, leaving Trammell stranded at second.

Working on a perfect game through six, Wilcox in the seventh inning induced Rudy Law to ground out to first. Tony Bernazard hit a foul pop fly that Leach handled easily. Harold Baines nearly ended the perfect game when he hit a low liner to left. Fortunately for Wilcox, the ball was hit directly at Herndon, who caught it for the inning’s last out.

The Tigers extended their lead in the top of the eighth. Herndon led off with a double off Koosman. Parrish failed to move him along when he popped out to Fisk in foul territory, and pinch-hitter John Wockenfuss followed with a fly out to left field. With two down, Wilson collected his second RBI of the game, a single to right that scored Herndon. Wilson advanced to second on the throw to the plate.

With the White Sox down 5-0, right-hander Steve Mura was summoned from the bullpen. Facing the right-handed-hitting Lemon, Mura uncorked a wild pitch that allowed Wilson to trot to third. Wilson scored on Lemon’s infield single to second and Leach fouled out to third to end the inning with the Tigers leading 6-0.

The only question now was whether Wilcox would pitch the major leagues’ first perfect game since Cleveland’s Len Barker threw one against the Toronto Blue Jays on May 15, 1981. Wilcox got through an uneventful bottom of the eighth. He caught Luzinski looking, retired Kittle on a fly ball to center, and finished the inning by striking out Walker without the bat ever leaving his shoulder.

By the bottom of the ninth, White Sox fans, hoping to see history, were firmly behind Wilcox and his pursuit of perfection. The Comiskey Park crowd gave Wilcox a standing ovation as he walk toward the mound for his date with destiny.3 Fisk started the inning with a fly out to left. Mike Squires, brought in to pinch-hit for Vance Law, grounded out to Leach at first, who touched the bag for the 26th consecutive out. One out to go!

LaRussa sent in right-handed-hitting Jerry Hairston to pinch-hit for Dybzinski. Hairston, one of the most successful pinch-hitters in White Sox history, was hitless in his first six at-bats of the season.4 Wilcox took a deep breath, toed the rubber, and delivered his pitch to Hairston. Swinging on the first pitch, Hairston took the air out of the ballpark when he bounced a single up the middle into center field. The base hit broke up Wilcox’s bid for a perfect game as boos rained down from the stands. Back to the top of the order, Rudy Law grounded out to Leach at first, who stepped on the bag to end the game. Wilcox had to settle for a one-hit 6-0 victory, the second one-hitter of his career, and American League Player of the Week honors.5

After the game Wilcox was asked when he became aware that he was pitching a perfect game. “I heard them talking about it on the radio,” Wilcox said, and (Kirk) Gibson said something to me in the fifth inning. I wasn’t worried about being jinxed. I was worried about finishing the game.”6